Blog
Papal Artifacts / Father Richard Kunst / August 24th: A Reflection from the Curator on the Feast of St. Bartholomew
Aug 23 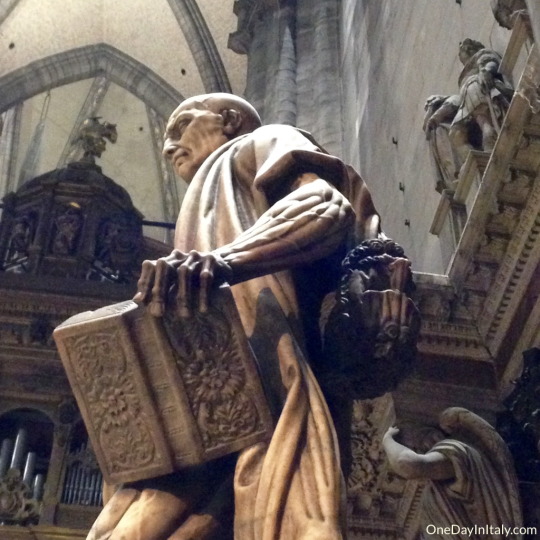 August 24th: A Reflection from the Curator on the Feast of St. Bartholomew

‘Unthinkable’ Comment in Mark’s Gospel Shows Why We Honor Mary

On Aug. 24, we celebrate the feast day of the Apostle St. Bartholomew, and although we know next to nothing about him, he is one of the most recognizable of the Apostles in sacred art because of how he is portrayed. Most often he is holding a large knife and his own skin. This is because of ancient tradition that holds he was martyred by being flayed alive while preaching the Gospel either in India or Armenia. This portrayal of the Apostle is perhaps most famous in Michelangelo’s Final Judgment in the Sistine Chapel in Rome, where it is said Michelangelo made the detached skin into his own self portrait. A downright grotesque portrayal of the flayed Apostle can be seen in the form of a marble statue in the cathedral of Milan, Italy.

The fact is, we know so little about St. Bartholomew that even his name is not actually his name! Bartholomew is not a proper name but rather what is referred to as a patronymic — it literally means “Son of Tolmai.”

In the Western culture of the United States we have adopted the ancient Roman practice of having a first, middle, and last name, but for the Jewish people during the time of Jesus it simply was not the case. People had only one name, no middle or last name. In order to differentiate people of the same name they would refer to a person by the dad’s name, like Bartholomew, whose given name according to the Gospel of John was Nathanael. Jesus says to Peter, “Blessed are you Simon son of Jonah,” since there were two Apostles named Simon. Jesus would have widely been known as Jesus son of Joseph, since Jesus was one of the more common names of the day. Dead or alive, the father’s name would often act as a sort of last name, and that ancient Jewish practice has seeped into our culture with names like Johnson, Peterson, and Anderson.

There is a noteworthy scriptural exception to this very fast rule of ancient Jewish practice, and that comes in the Gospel of Mark, when Jesus is back in Nazareth preaching in his hometown synagogue. The Gospel says that the people marveled at Jesus’ knowledge and wisdom, wondering where he got all this, and then they ask, “Is this not the carpenter, the son of Mary?” (Mark 6:3).

I have to say, in the real world during the time of Jesus that never would have happened. Not only would it be viewed as completely against the cultural norm, but it would also have been a major insult to Joseph, whether he was alive or dead. When the mother of the Apostles James and John petitioned Jesus to have her sons sit on the right and the left of Jesus in his kingdom, the Gospel refers to her as the mother of the sons of Zebedee, which might seem a bit demeaning to our 21st century ears, but it was the expected practice in the world of Jesus.

So why would the Gospel of Mark portray people as referring to Jesus as the “son of Mary” when it clearly would not have actually happened? The answer is actually pretty simple.

The Gospel of Mark does not say a word about the birth or childhood of Jesus. It starts with his baptism, when he was presumably around 30 years of age. There are scripture scholars who believe that Mark put this “unthinkable” comment of Jesus the son of Mary in his text to drive home the very point that the Gospels of Luke and Matthew make in their narratives, namely that Jesus had no biological father, that Mary was Jesus’ only biological parent.

There are a lot of people, Catholics and non-Catholics alike, who think the church puts too much emphasis on the Virgin Mary. To those people, I say, take that up with Jesus the son of Mary! As Bishop Fulton Sheen once noted, to the people who have a problem with Mary, they should note that Jesus spent ten times as much time with Mary while on earth as he did with any of the Apostles.