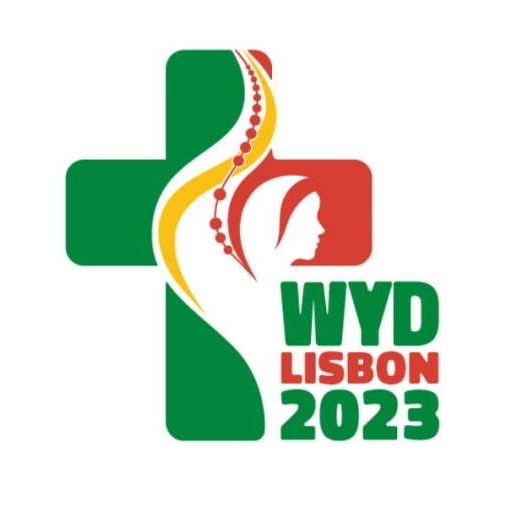 The logo, featuring the Blessed Virgin Mary in front of a cross, was selected in an international contest with hundreds of participants from 30 countries by the Vatican Dicastery for Laity, Family, and Life.

It was designed by Beatriz Roque Antunes, a 24-year-old who works at a communication agency in Lisbon.

“It means a lot to me. It’s not every day that one has the opportunity to offer their gifts to the faith and the Church,” Antunes said on finding out that her logo had been selected.

The Marian logo was designed to communicate the World Youth Day theme selected by Pope Francis: “Mary arose and went with haste,” from St. Luke’s account of the Virgin Mary’s visitation to her cousin Elizabeth after the Annunciation.

The pope announced that the Portuguese capital would host the global Catholic gathering of young people at the closing Mass of the last international World Youth Day in Panama City in January 2019.

Lisbon, a city of 505,000 people, is around 75 miles from Fatima, one of the most visited Marian pilgrimage sites in the world. The 2018 report “European Young Adults and Religion” found that Portugal has one of the highest levels of weekly Mass attendance among young people in Europe.

World Youth Day Lisbon was initially scheduled for August 2022, but the Vatican announced last April that it would be postponed to August 2023, as the World Meeting of Families in Rome was postponed from June 2021 to 2022 due to the coronavirus pandemic.

Both events usually include the presence of the pope and gather at least tens of thousands of people.

A delegation from Panama is now scheduled to pass the cross and icon to young people from Portugal Nov. 22, the Feast of Christ the King. But Bishop Américo Aguiar, the president of the WYD Lisbon Foundation, said this date might be subject to change due to the pandemic.

World Youth Day, which is typically held on a different continent every three years, was started by St. Pope John Paul II in 1985. The Lisbon organizing committee said that it decided to release the logo on Oct. 16 in honor of the anniversary of the election of St. John Paul II.