Blog
Papal Artifacts / Father Richard Kunst / Why Does Father Wear Pink during Lent: A Commentary from the Curator
Mar 14 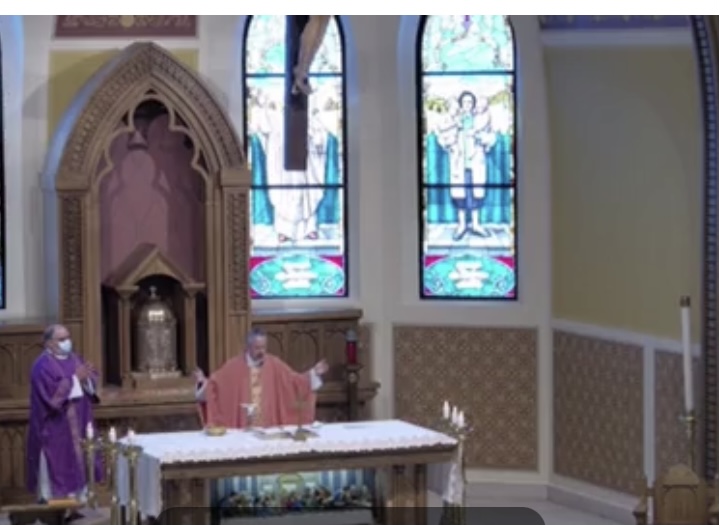 Why Does Father Wear Pink during Lent: A Commentary from the Curator

NOTE: This is a somewhat humorous account of Father Kunst’s  “pink” chasuble, used in his former parish, which he has replaced in his new assignment.

Why Does Father Wear Pink During Lent?

You can buy almost anything on the online auction site Ebay, which can be both a good thing and a bad thing. Due to pressure from the Catholic Church, Ebay clamped down on the buying and selling of saints’ relics. Unfortunately, there are enough loopholes for people to be able still sell such sacred items on the auction website. There have been a number of great things over the years that I have purchased for my parish on this online auction, including the beautiful candle stands we use for the altar, but about 10 years ago I bought a Mass vestment on Ebay that has become an ongoing joke among my parishioners.

Most priests own their own set of vestments, and because we use the colors purple, green, and white so often, I dare say that most priests have more than one chasuble (the name of the outer vestment worn by priests at Mass) of each of those colors. The other liturgical color that is used, but not nearly as often, is red, which is worn at Pentecost, Good Friday, and for any martyred saint’s feast day.

The color that is used most rarely is rose. The liturgical color rose is only used twice during the year, Gaudete Sunday, which is the third Sunday of Advent, and Laetare Sunday, which we will celebrate in March as the fourth Sunday of Lent.

Now here is the joke about my Laetare Sunday chasuble: It is pretty old, maybe from the 1950s, when Mass was always celebrated “ad orientem” (with the priest facing the same direction of the people), so the decoration on the vestment was only on the priest’s back. Since I do not celebrate the Mass “ad orientem,” I purposefully wear my vestment backwards, so that the decoration can be seen by the congregation. But more significant is that my vestment really is not rose, it’s Pepto-Bismol, or as my parishioners always call it, pink.

They don’t know this (until now), but whenever I am reassigned to another parish, I will be donating this Ebay purchase to the parish as a parting gift.

All this aside, what is the point? What exactly is Laetare Sunday, and why do we celebrate it? This fourth Sunday of Lent is called Laetare because of the first words from this liturgy’s introit, “Laetare Jerusalem” — “Rejoice, Jerusalem.” During the first several centuries of the Catholic Church, Lent was celebrated for only 36 days. Eventually four days were added before the first Sunday of Lent to make the season a complete 40 days. This is how we got Ash Wednesday, which occurred for the first time in the year 714 A.D.

Laetare Sunday marks the middle of the Lenten season, although technically the very middle of Lent is the Thursday before the fourth Sunday. Nevertheless, on this fourth Sunday, representing the middle of Lent, the church encourages us to be a little more lighthearted. The lighter color of rose (not pink) and the addition of flowers permitted in the sanctuary for the only time in Lent are meant to encourage the faithful in their penance. The church is telling us not to lose heart — our penances are half over; Easter is coming.

The Advent counterpart to Laetare Sunday, as already mentioned, is known as Gaudete Sunday, and traditionally it served the same purpose. In early centuries, Advent, like Lent, had more of a penance theme to the season. On the third week of Advent, the church wanted the faithful to have a lightened break to the penance, so the colors of the vestment and Advent candles were brightened for that one day of the season. Advent, of course, is no longer considered to be a season of penance, but the church has kept the ancient tradition of changing the colors.