Blog
Papal Artifacts / Father Richard Kunst / There Is More than One Charism to the Papacy: A Commentary from Fr. Richard Kunst
Aug 08 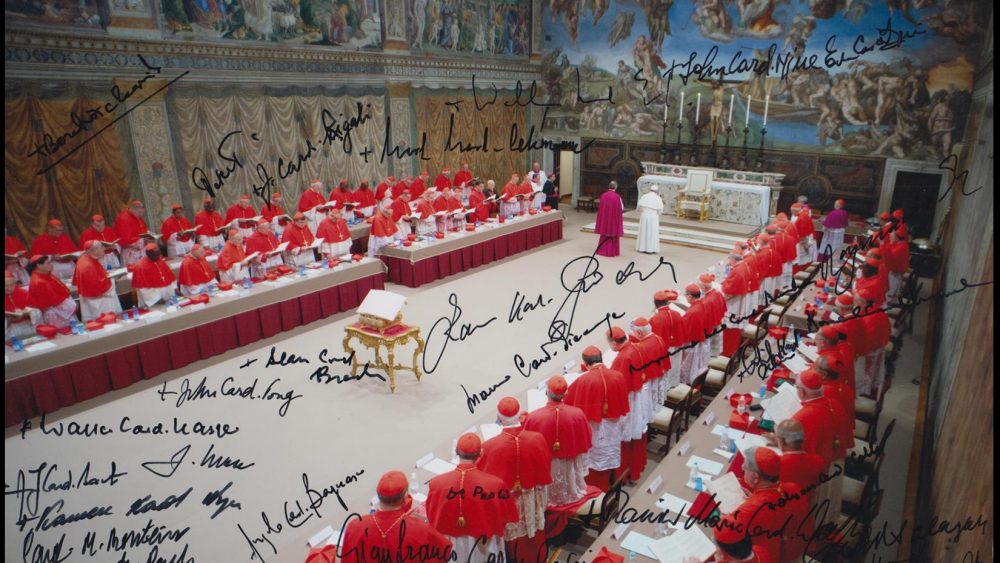 There Is More than One Charism to the Papacy: A Commentary from Fr. Richard Kunst

This is an unusual and rare photograph of the signatures of 28 cardinals in the conclave electing Jorge Bergoglio.

The new Pope Francis stands at the altar in the Sistine Chapel with all the cardinals, and those who signed this photograph are  clearly present. 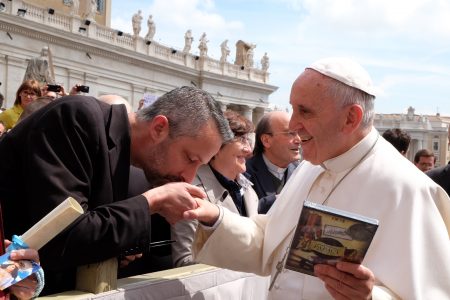 The late, great Venerable Archbishop Fulton J. Sheen once famously said that he would rather be wrong with the pope than right without him.  At first glance this might seem to be an illustration of blind, unthinking trust.  Rather, it is a statement of faith.  As Catholics we profess that the pope is the Vicar of Christ, his special and unique representative as the physical head of the Mystical Body of Christ on earth.  Because of this truth, I firmly make Bishop Sheen’s words my own.

History confirms this.  Though we have had more than a handful of bad men who have been popes, the fact is they were still Christ’s vicars on earth.  In that capacity, though their morals may have shown their weaknesses, they still were protected from making serious errors in the matters of faith they were chosen to uphold.

It has been over six years since Pope Francis was elected, and in that period of time there has been an annoying murmuring of criticism coming from the very same group of people who traditionally have been the papacy’s biggest supporters and greatest champions.  You don’t have to look too far on the “blogosphere” to see self-described “traditionalists” blasting the pope.  Recently I read one blogger who referred to Pope Francis’ liturgies as “clown Masses.” This was a reference to the unfortunate and common practice after the Second Vatican Council of some priests dressing up in clown outfits to preside at Mass.

There is no doubt that much damage done to the sacred liturgy following the Council when many priests and even bishops took liberties with the Mass that were not theirs to take.  Thankfully, with the election of Pope St. John Paul the Great and Pope Benedict XVI, we have been brought back to a more appropriate and balanced approach to the liturgy.  Pope Benedict in a particular way encouraged the more sacred and, some would say, traditional celebration of the liturgy.  Though Pope Benedict did not issue many new directives in the liturgy, it was his example that spoke volumes—an example that was definitely needed.  I believe Pope Benedict’s example in this area has done more good than can be measured.

Yet with all things human and divine, people can still mess things up.  Some of the very same people who were citing Pope Benedict’s example as a reason to criticize certain priests’ styles of celebrating the Mass are the same people who are now criticizing Pope Francis’ example!  Those people no longer have what they perceive to be their “ace in the hole” when criticizing priests and bishops who don’t do Mass the way they think they should.  That “ace in the hole” was the example of Pope Benedict XVI.

The crazy thing in all of this is that the people now criticizing the pope for being too “liberal” with liturgy were often the very same people who were criticizing “liberal” Catholics for picking and choosing both what they wanted and didn’t want to believe.  Can there be any doubt that the Holy Spirit was with the cardinals when they chose Jorge Bergoglio to be Francis?  Who is anyone to question the Holy Spirit?

I am not that old — I’m still in my fourth decade — but I have been able to see firsthand how God has selected the right men to be His Son’s vicars at the right times.  We needed Pope St.  Paul VI in the ‘60s and ‘70s.  We needed a John Paul I and Pope St. John Paul the Great from 1978-2005.  We needed the gifts of Benedict XVI in the last eight years, and now the Holy Spirit has given us Francis!  We couldn’t invent a better person to be pope for our day and age, because we cannot outdo God in His wisdom or generosity!  Anyone more Catholic than the pope, who chooses to criticize how the pope celebrates his Masses, or any other similar criticisms, is going down a very misguided road.  There is more than one charism to the papacy.

I am so happy to have been a priest during the pontificate of Benedict XVI so as to help guide me to better liturgy.  Today I am equally thrilled to be a priest during the papacy of Francis, because he is not only teaching me to be more concerned for the disadvantaged, but also how to live a simpler lifestyle.  Both are needed.

Truly, I would rather be wrong with the pope than right without him, but in this case, as is usual, the pope is certainly right!