Blog
Papal Artifacts / Father Richard Kunst / September 30: The Feast of St. Jerome & The Vulgate Version of the Bible, & A Commentary by the Curator
Sep 29 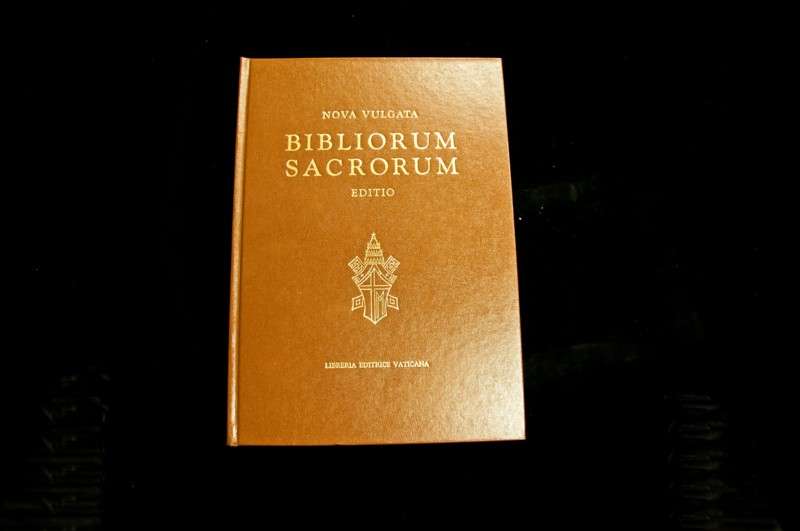 September 30: The Feast of St. Jerome & The Vulgate Version of the Bible, & A Commentary by the Curator

It was Saint Jerome who translated the Hebrew scriptures from Hebrew and Greek into Latin, the language of the common people.  His was a great gift to the Catholic church, and we celebrate the gift of his life to our Church, and the gift of this copy of the Vulgate version of the Bible, dated 1988, to the Papal Artifacts’ Collection

The story of how Father Kunst acquired this is featured with this entry.

Saint Jerome, pray for us!

Every five years a bishop will go and meet with the Holy Father, and it’s called the ad limina visit. The purpose is to give the status of the diocese that he is pastor of. And in 1988, one of our former bishops, Bishop Brom, now the retired bishop of San Diego, had an ad limina visit with Pope John Paul, and the Holy Father gave him this Vulgate (Latin) version of the bible, which is nice, yes, but to get a copy of the word of God from the successor of Peter, the Vicar of Christ, (which is, we say, the “voice of Christ”) is very significant. Any type of gift like that from a pope is significant but especially a copy of the Bible.  –Father Richard Kunst

Bishop Brom in turn gave this Bible to Father Kunst for his Collection. 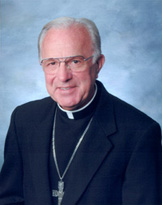 Papal Artifacts gratefully acknowledges the contributions of Bishop Robert Brom to the Collection.

When it comes to the realm of apologetics and accusations about past practices in the Catholic Church, there are frankly a lot of myths.  Don’t get me wrong—there are plenty of accurate accusations again the church that we as Catholics should not be too proud of, even in recent years, but the fact is that many things that have been leveled against the church in the past are patently false.

One example still comes up from time to time in my discussions with parishioners and non-parishioners alike, and that is how the church has handled the issue of the lay faithful and the reading of the Bible.

It is not all uncommon to hear someone say that the church used to discourage the laity from reading the Bible.  In fact, as the claim goes, parishes used to chain their Bibles down so that the faithful would not have access to them.  There is a good chance you have heard this said before.

The first thing that needs to be said is that it is important not to confuse the Catholic Church “officially” with the actions of particular priests or even bishops.  Throughout history there may very well have been overzealous and misguided pastors who tried to prevent their people from studying the Bible, but that has never been the stance of the Catholic Church, and one should not judge the church based on the actions of particular members of it, even if they are clergy.

The reason churches have stained glass windows is that up until relatively recent times the vast majority of people could not read.  The windows in the churches acted as “picture book catechesis” for the faithful.  That being said, trying to keep the faithful from reading the Bible would not have been an issue, because the faithful couldn’t read the Bible even if they had access to it.

Added to this is the point that before the printing press was invented, Bibles were rare and exceedingly expensive.  Before the printing press, Bibles were written by hand on parchment (lamb skin).  Do you know how many little sheep had to be killed to make a Bible?  Nor do I, but I can assure you it was a lot.  How many hours did it take for someone to write the entire Bible by hand on the parchment?  By today’s standards, you had to be very wealthy, maybe even a millionaire, to own a Bible.

So do you know what some parishes would do?  If they could afford a whole Bible, they would chain it down so that it would not be stolen!  Not to keep the faithful from being able to have access to it, but just the contrary, so that the Bible would remain in the parish so people who could read would be able to make use of it.

Another strong illustration as to how the Catholic Church welcomed scripture reading by the lay faithful is that once the printing press was available, the Catholic version or translation of the Bible in the vernacular, widely known as the Douay-Rheims, was produced and disseminated before the Protestant King James Version!

Also, throughout the world and throughout our diocese, there are all sorts of scripture studies and classes in our parishes and our schools.  Ever since the year I was ordained, I have taught the scriptures to parishioners, something I will always continue to do.