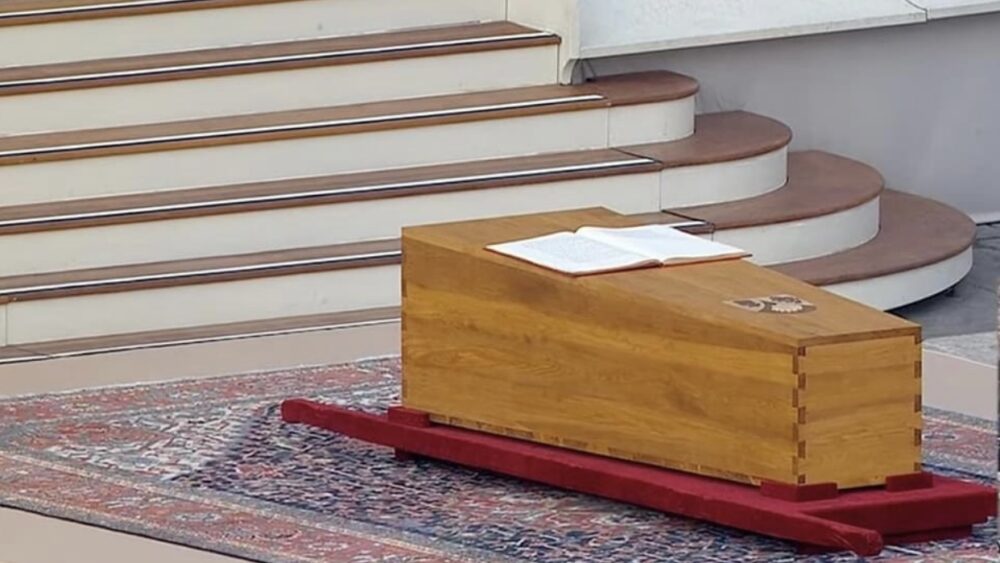 The Funeral of Pope Benedict XVI

A timeline of Pope Benedict XVI’s life and papacy: From humble beginnings to historic resignation

1927: Pope Benedict XVI is born on April 16 in his parents’ home in the town of Marktl in the State of Bavaria in southeastern Germany. He is the youngest of three children of Joseph Ratzinger Sr., a police officer, and his wife, Maria. Joseph is baptized on the day of his birth and named Joseph Aloisius Ratzinger.

1939: At the age of 12, Ratzinger enters the seminary at Traunstein in Bavaria.

1933-43: Ratzinger’s early life, like that of all Germans at the time, is shaped by the rise of Nazism and, later, the all-encompassing reality of World War II. According to both Joseph Ratzinger and his elder brother Georg (also a priest), their family was opposed to the Nazis because of their Catholic faith. His father’s attempts as a policeman to rein in the actions of Nazi Party “brownshirts” lead to the family’s relocation and, eventually, Joseph Ratzinger Sr.’s forced retirement in 1937. One of the teenage Ratzinger’s cousins, a 14-year-old with Down syndrome, is taken away by the Nazis in 1941 and never returns, probably murdered as part of the Nazi eugenics program.

1941: At the age of 14, Ratzinger is conscripted into the Hitler Youth, as required by German law after Dec. 1, 1936. Ratzinger states later in his life that he tried to avoid meetings of the Hitler Youth and was helped by a sympathetic teacher who ignored Ratzinger’s absences from the meetings.

1943-45: When he is 16 years old, Ratzinger is drafted into the German military, serving first as part of an anti-aircraft gun crew and later being trained as an infantryman. In the final days of the Nazi regime in the spring of 1945, Ratzinger deserts his unit and tries to return home. He is briefly detained in an American prisoner-of-war camp before being released at the end of the war in Europe in May 1945. Upon his release, he re-enters the seminary.

1951: After six years studying philosophy and theology at a theological institute associated with the University of Munich, Joseph Ratzinger is ordained a priest on June 29 by Cardinal Michael von Faulhaber of Munich, alongside his brother Georg.

1962-65: Ratzinger participates in all four sessions of the Second Vatican Council in Rome as a chief theological advisor (peritus) to Cardinal Josef Frings of Cologne, Germany. In 1963 he also begins teaching at the University of Münster.

1966-76: Ratzinger is given the chair of doctrinal theology at the University of Tübingen in 1966 (among his colleagues is Hans Küng). Considered a reformist at the time of the council, Ratzinger begins expressing more traditionally minded views later in the decade. Some of his biographers have linked this change in focus to the wave of student uprisings and radical movements that swept through German universities in the late ’60s.

1969-77: Ratzinger returns to Bavaria to teach at the University of Regensburg in 1969. He is associated during these years with prominent European theologians, including Walter Kasper, Henri de Lubac, S.J., and Hans Urs von Balthasar, and plays a leading role in forming the theological journal Communio in 1972. In 1976 he is named vice president of the University of Regensburg.

1977-78: Joseph Ratzinger is ordained archbishop of Munich and Freising on May 28, 1977, choosing as his episcopal motto “Cooperatores Veritatis” (“Cooperators of the Truth”). A month later, on June 27, he is elevated to the College of Cardinals by Pope Paul VI. The next year he takes part in the conclaves that elect Pope John Paul I and Pope John Paul II.

1981-2005: On Nov. 25, 1981, Ratzinger is appointed prefect of the Sacred Congregation for the Doctrine of the Faith by Pope John Paul II, a position he holds for 24 years. He earns a reputation as a doctrinal conservative with a particular focus on the dangers of relativism, syncretism and religious indifferentism. Liberation theologians come under particular scrutiny, with the C.D.F. issuing public criticisms of liberation theology in 1984 and 1986.

1986-92: Ratzinger presides over the drafting committee that composes the current Catechism of the Catholic Church.

1999: Ratzinger personally intervenes in the faltering dialogue with the Lutheran World Federation to hammer out the “Joint Declaration on the Doctrine of Justification,” considered by ecumenicists to be a groundbreaking move in the quest for Christian unity.

2000: The C.D.F. releases “Dominus Jesus,” which warns that religious pluralism could easily become indifferentism or relativism, and is often considered a response to the theological explorations of Jacques Dupuis, S.J. Though mainly concerned with non-Christian religions, the document’s reference to non-Catholic denominations as “not churches in the proper sense” draws strong criticism from Protestant groups as well as ecumenical advocates.

2005: After the death of Pope John Paul II on April 2, Cardinal Ratzinger participates in the conclave to elect a successor. On April 19, he is elected pope, taking the name Benedict XVI. He chooses Benedict in honor of both Pope Benedict XV (who led the church in an effort for peace during World War I) and St. Benedict of Nursia, considered the founder of Western monasticism.

2005-13: During his eight-year papacy, Benedict releases three encyclicals: “Deus Caritas Est” (“God Is Love”) in 2005, focusing on God’s love and its role in our lives; “Spe Salvi” (“Saved in Hope”) in 2007, on the importance for Christians to believe their lives will not end in death and the impact this hope can have on our present; and “Caritas in Veritate” (“Charity in Truth”) in 2009, which tackles the problems of global development, as well as the role that love, truth and charity must have in addressing them. Pope Benedict also plays a key role in writing the first drafts of “Lumen Fidei” (“The Light of Faith”), which is finished and signed by Pope Francis in 2013.

2005: Within weeks of Benedict XVI’s election, Thomas Reese, S.J., resigns his position as editor in chief of America at the insistence of the C.D.F.

2007: Returning to its criticism of liberation theology, the C.D.F. releases a notification criticizing Jon Sobrino, S.J., for his christological and ecclesiological views.

2006: During a lecture at the University of Regensburg on Sept. 16, Pope Benedict remarks on the irrationality of religion-driven wars, using the early conquests of Muhammad as an example and comparing them to “jihad” today. His remarks, perceived by many as antagonistic toward Islam, lead to unrest in the West Bank and assassination threats against the pope. This incident notwithstanding, Benedict gives interfaith dialogue with Islam a greater emphasis than previous popes.

2008: In his first visit to the United States, from April 15 to April 20, the pope travels to both Washington, D.C., and New York City, and is also received by President George W. Bush at the White House, where Pope Benedict stresses his concerns relating to the Iraq War and the dignity of undocumented immigrants in the United States. He also publicly addresses the sexual abuse scandal in the Catholic Church as well as abortion. He visits Ground Zero, the site of two of the terror attacks of Sept. 11, 2001, and prays both for the victims and for peace.

2013: On Feb. 11, Pope Benedict XVI shocks the church and the world by announcing his resignation. On Feb. 28, he becomes the first pope to resign since Gregory XII in 1415, citing his advanced age and health concerns. He makes it clear he will not retain the title of cardinal or be eligible for any office of the Curia in retirement; instead, he will be styled pope emeritus and will lead a life of prayer. He spends the remaining years of his life largely out of public view and passes away in Rome on Dec. 31, 2022.FacebookTwitterEmailMore: POPE BENEDICT XVI / VATICAN

David Gibson, director of Fordham University’s Center on Religion and Culture, is an award-winning religion journalist, author and filmmaker. He is author of The Coming Catholic Church, about the scandal of sexual abuse by members of the clergy, and The Rule of Benedict (HarperOne, 2006).