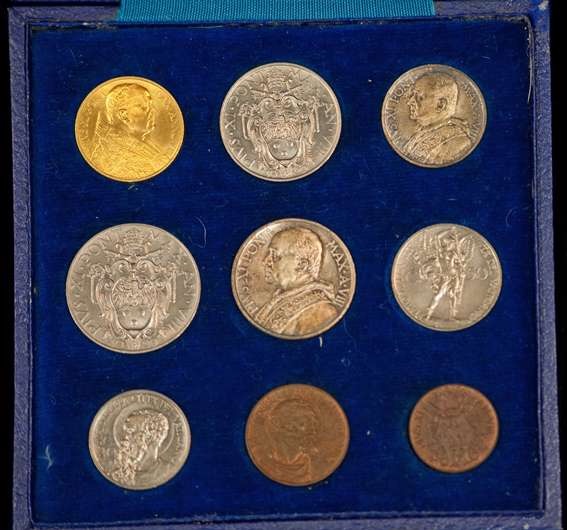 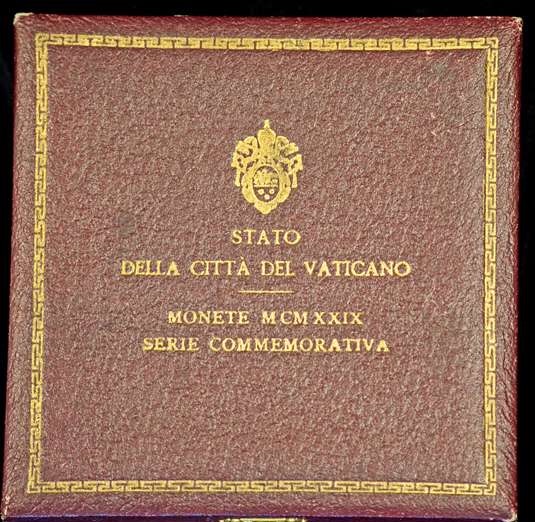 During the EWTN series, Father used just one of the two commemorative coin sets that are featured here.

I’ve mentioned elsewhere that the Vatican City-State was not recognized as a nation until the 1929 signing of the Lateran Treaty, and so they didn’t have coins or stamps like a normal country would have. As soon as it was signed in 1929, they started to print stamps and mint coins.

This item is a full set of coins minted by the Vatican for the commemoration of the signing of the Treaty. It is the very first set of lira from 1929, including a gold piece with the image of Pius XI on it. The cover, of course, is included with the items.

When I talk about this coin set, what I talk about is the comparison with people who collect old toys; the toys are much more valuable in their original boxes. So it’s the box that makes this set so significant. If you look at the cover, you can see that it has Pius XI’s coat of arms. And then it includes the information about the State of Vatican City. It says it was issued in 1929 as a series of commemorative coins. It talks about the date of the commemoration of the Lateran Treaty.

Today, of course, the Vatican uses the euro. At the time of these commemorative coins, the Italian monetary standard was the lira–up until 2000.

If you go to the Vatican today, you’re able to buy commemorative coins from the different stages of history or papacies. As a matter of fact the European Union, just in the last couple of years clamped down on the Holy See, because it was selling euros in commemorative sets. And they said, “No, this is legal tender, and you’re a country. You have to actually use your euros as coinage.” And so now if you go to Rome, and to the Vatican’s bookshop or other places, they’ll often give you one of the commemorative euros that up until just a few years ago you could only get in a commemorative set.

The Vatican also has its own postal system. Mail gets delivered to Vatican City-State, not to Italy. The post office was established in 1929, and it handles more letters per capita than any other one in the world. They have their own stamps, and purchasing them is a very popular thing to do in Rome. There are always long lines of people waiting to buy stamps from the Vatican in order to mail something from the Vatican City-State itself. If you think about how little it takes to print a stamp and how easily they sell, you can understand why they are profitable to the Vatican. So, actually, one of the main sources of income for the Holy See is their stamps. And it’s probably the third most popular place at the Vatican–St. Peter’s Basilica, first, the Sistine Chapel with its museums, second, and then, the Post Office

These are most valuable because they are in their original cases.