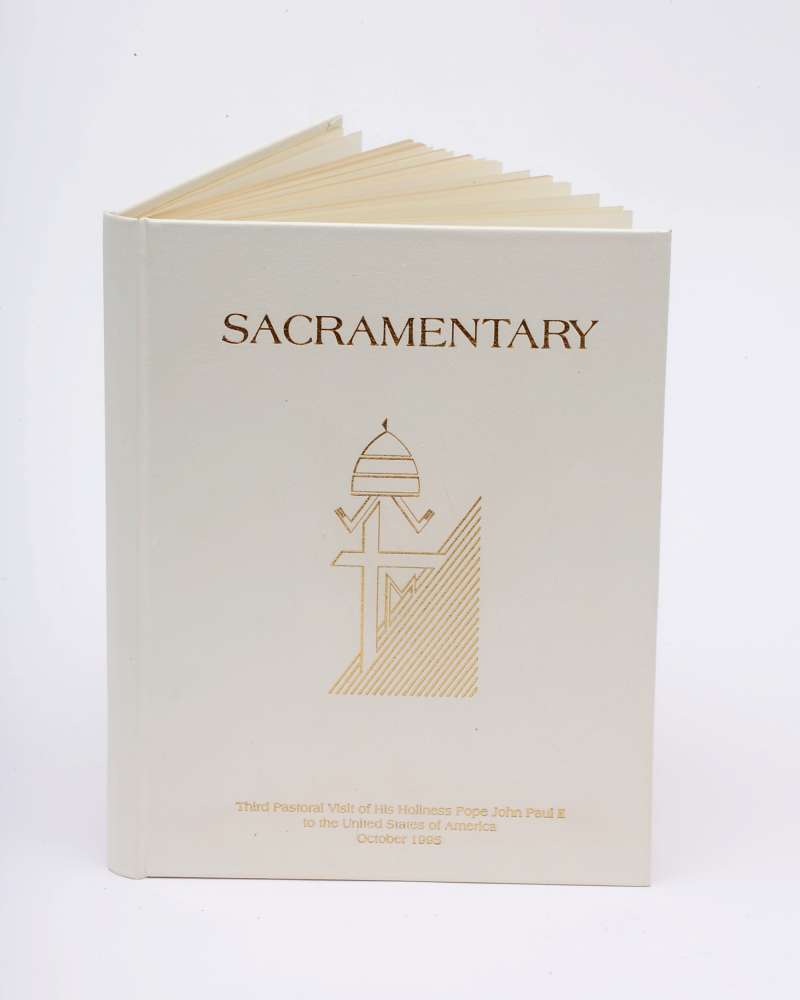 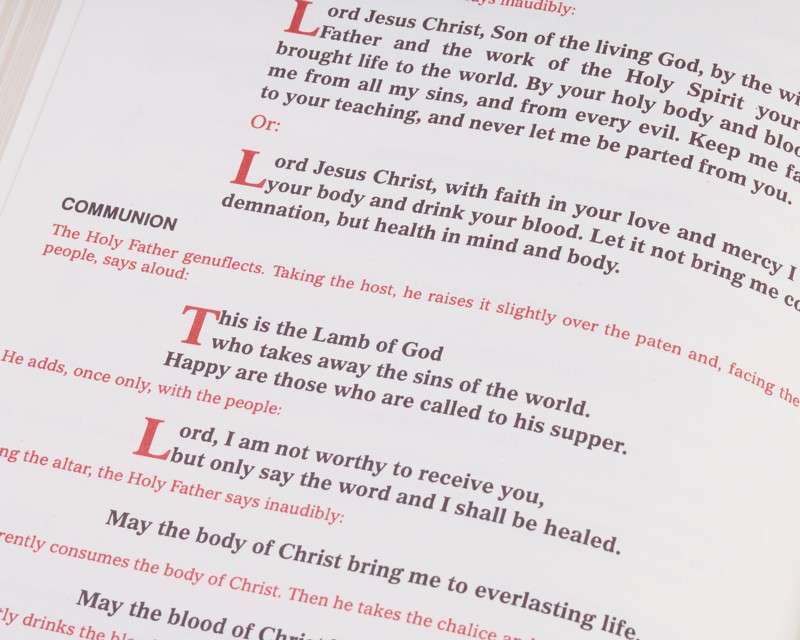 The following commentary is from the EWTN series, The Papacy: A Living History, The Papal Artifacts Collection of Father Richard Kunst. The Sacramentary was featured on the first episode of the series, Popes Benedict XVI and Blessed John Paul II.

This is a sacramentary that Pope John Paul used in 1995 when he was on his third pastoral visit to the United States. While here he went to several different cities. And, like the chasuble, this was a gift from the bishop of Duluth, Minnesota, Dennis Schnurr, who was actually working for the Bishop’s Conference at the time. And he was able to travel with the Holy Father at least for portions of the trip.

The Pope used several of these sacramentaries in various stops during his pastoral visit. This is one he used at a Mass. And so it’s a very nice item.

When we speak of a ‘sacramentary’, we are talking about a Roman missal. A sacramentary contains all the prayers and rubrics for the celebration of Mass. Most people will know about it and be familiar with it when the priest says, “Let us pray.” That’s the cue for the altar server to bring the missal to the priest to say the various prayers.

And so each Mass has different prayers, and the sacramentary contains all of those prayers. The fact that we have one here in this Collection that Pope John Paul II himself used–I mean he prayed out of this book! It’s one thing to have artifacts that are signatures of popes or even the Conclave seals, but to have something that the Holy Father used to lead the prayers at Mass: that is awe-inspiring.

I always like to call him John Paul the Great, not John Paul II. And to have this tangible connection to his prayer! Another thing that is so neat about this is it’s white. Most often missals are red books, but because this is the Pope’s, it is white.

It is such a nice item to have, and the fact that it’s connected to an historical event—with the Pope here in the United States makes it very special.

But mostly because he prayed with this is what makes it so special. John Paul the Great was great because he was such a man of prayer. He wrote so many documents and encyclicals in regard to the Eucharist. I mean, the Eucharist was absolutely central to his life.

One time I read in front of him–the first reading. He was in very close proximity to me. And it’s the most nervous I have ever been reading something!

This sacramentary signifies that really close connection to, again, the Pope I believe to be the greatest Pope of all time.

The sacramentary says, Third Pastoral Visit of His Holiness Pope John Paul to the United States of America October 1995.

The sacramentary was a gift from the former Bishop of Duluth, Minnesota, Dennis Schnurr, to Father Kunst on the occasion of The Vatican Comes to Duluth in 2004. This event showcased Father’s Collection and was a fundraiser for seminarians from the Diocese.

Papal Artifacts gratefully acknowledges the contributions of Archbishop Dennis Schnurr to the Collection.