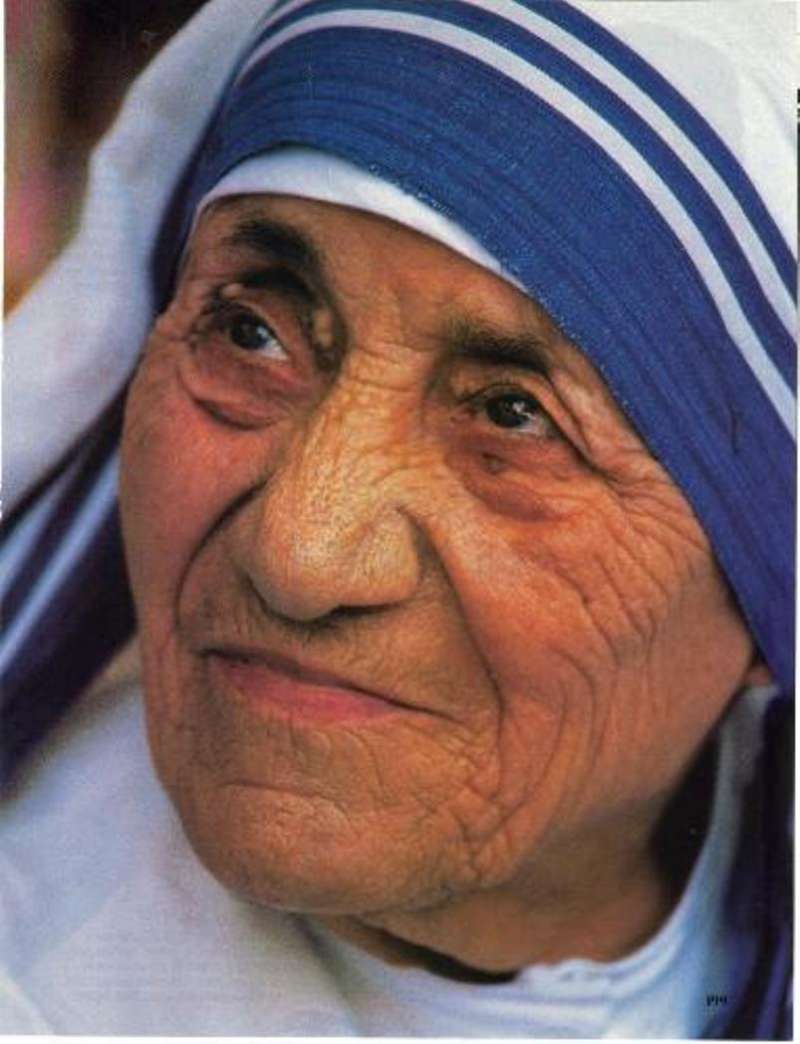 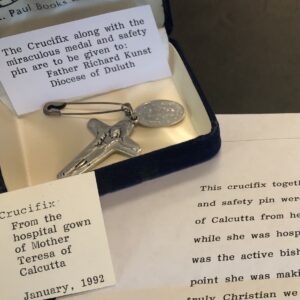 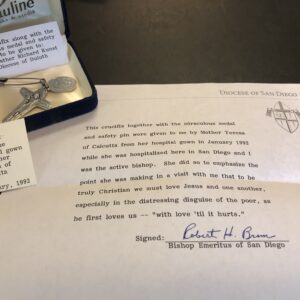 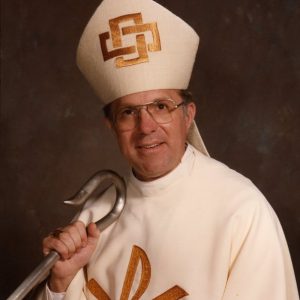 Statement from Bishop Robert Brom regarding this 2nd class relic 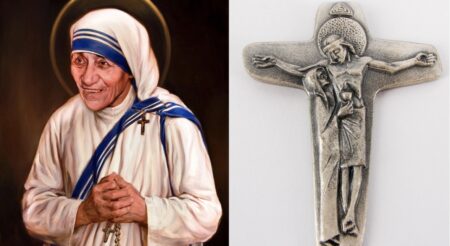 The Cross Mother Teresa Loved and Carried with Her

Created by a Schoenstatt seminarian, it ‘best expressed what she and her community wanted to do’

It’s not too easy to see, but the official canonization portrait of Mother Teresa depicts what’s known as the “unity cross” on her rosary.

The unity cross is linked to the Schoenstatt movement, as it was created by the first generation of Chilean Schoenstatt seminarians who studied in Brazil and Switzerland.

The unity cross depicts Jesus on a low cross, enabling Mary to be pressed against him, as she collects his blood in a chalice which is at the center of the image.

According to Schoenstatt, the unity cross was crafted by Fr. Angel Vicente Cerró, when he was a seminarian. It was finished in 1960 and presented at the Schoenstatt Shrine in Bellavista, Santiago, Chile.

The original image is now in the Schoenstatt Shrine in Stuttgart, Germany.

Monsignor Peter Wolf explains that “Mother Teresa found [a replica of] this cross in the dirt on the street and knew nothing of its history. She discovered it again when she visited the Vatican and saw that it was the pectoral cross of Archbishop [Francisco] Errázuriz [of Santiago, Chile], who was then the Secretary of the Congregation for Consecrated Life. Mother Teresa told him that this cross best expressed what she and her community wanted to do: Like Mary to stand by the Cross of the Dying Christ and to meet him there. The Archbishop, later Cardinal, then gave her hundreds of copies of this Unity Cross for her Sisters.”

Cardinal Errázuriz is a priest of the Schoenstatt Fathers, serving from 1974 as the community’s Superior General. In 1990, he was appointed secretary of the Vatican’s congregation for religious. In 1998, he was made archbishop of Santiago, Chile, retiring in 2010.

In fact, Cardinal Errázuriz has himself explained how it was that Mother Teresa was given copies of the unity cross for her sisters:

The memory of the conversation with Mother Teresa of Kolkata about the Unity Cross remains engraved perfectly in my memory.(When I worked in Rome) she attended the Congregation for the Institutes of Consecrated Life and Societies of Apostolic Life to speak about a new Institute of priests she was founding. Their center would be in Tijuana, Mexico. This would be their Kolkata (many people from Central America and Mexico flocked to this town after having left their homes and sold everything they had to cross over the border into the United States. They were unsuccessful and succumbed to immense poverty).When she greeted me and saw my pectoral cross, which is a copy of the Unity Cross, she slightly lifted the jacket she was wearing over her sari and showed me a small Unity Cross that she always carried with her. (She didn’t say anything about the origin of the cross she carried.) She added: ‘Here is the Mother of God together with the Poorest of the poor. ‘As she said goodbye, she asked me if I could get 3,000 crosses because she wanted every Sister of Mercy to have her own. I wanted to give them this gift. I found enough donors and we bought them in Mexico. I sent them to her.”

Aleteia is a worldwide network providing daily content designed to inspire readers in their daily life. 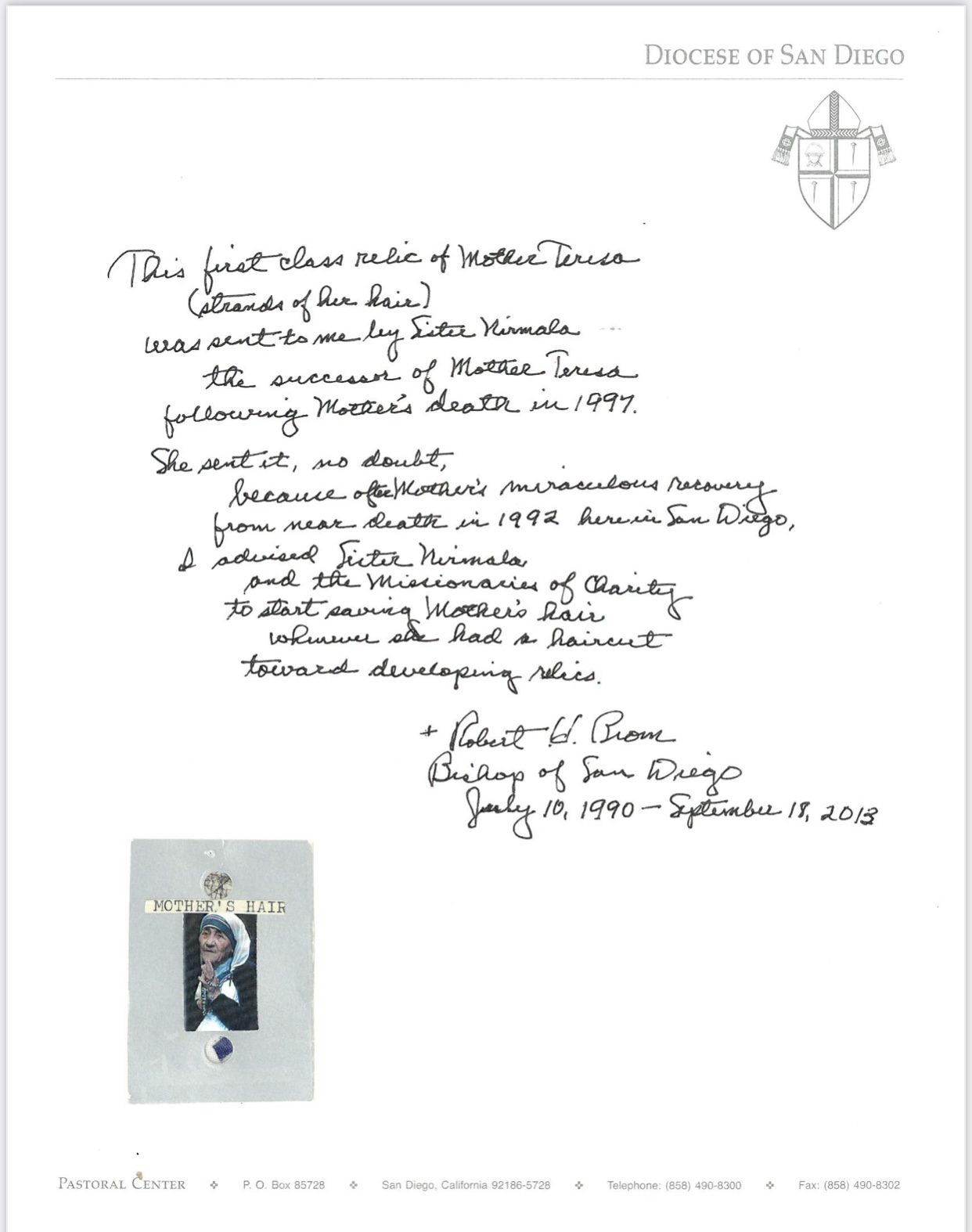 She sent it, no doubt, because after Mother’s miraculous recovery from near death in 1992 here in San Diego I advised Sister Nimala to start saving Mother’s hair whenever she had a haircut toward developing relics.

NOTE: This first class relic is on loan to the Papal Artifacts’ Collection. 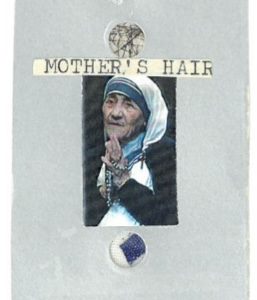 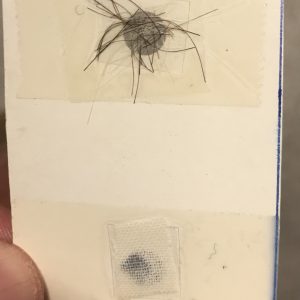 Mother Teresa: A 1st Class Relic–Mother’s Hair (Back of Card)

The Papal Artifacts Collection has two letters written by Mother Teresa to Father Richard Kunst. One chides him for asking for her autograph but she still signs the letter. The other is in answer to a request for prayers during a time of discernment regarding his vocation. She offers both her promise of prayers and her advice. There is also a signed photograph of her and an additional letter donated to Papal Artifacts.

A third letter, featured below,  to Miss Rita Schreiber  was donated to the Collection and also contains the signature of Mother Teresa.

But above all be convinced of Jesus’ tender love for you in and through this present situation and no matter what its outcome is, listen to Jesus speak in your heart.  — Words of Mother Teresa address to Richard Kunst. 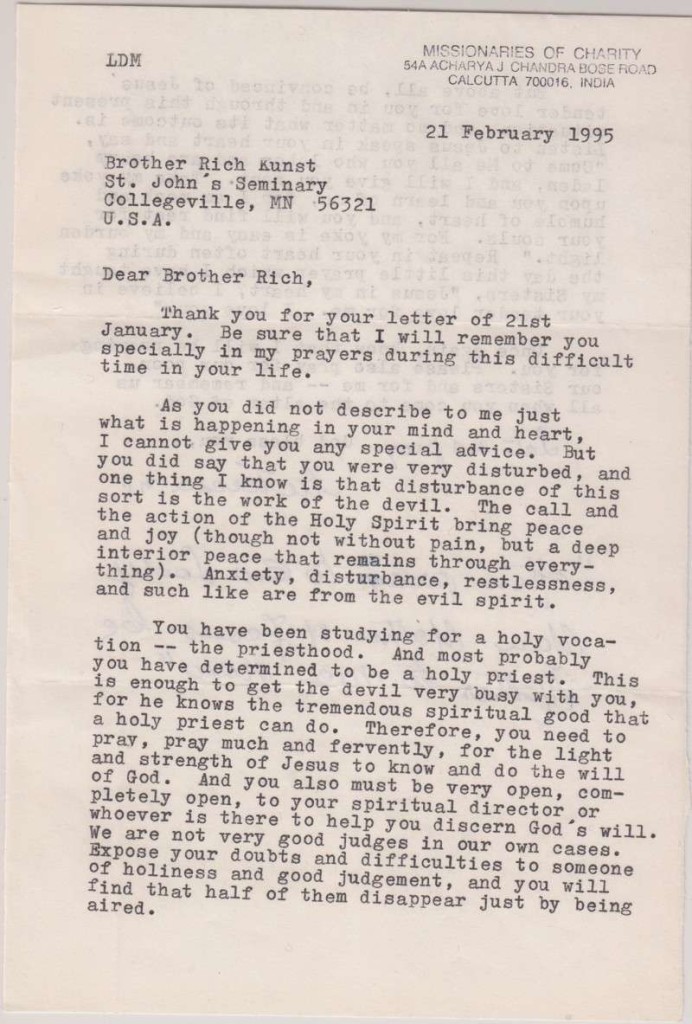 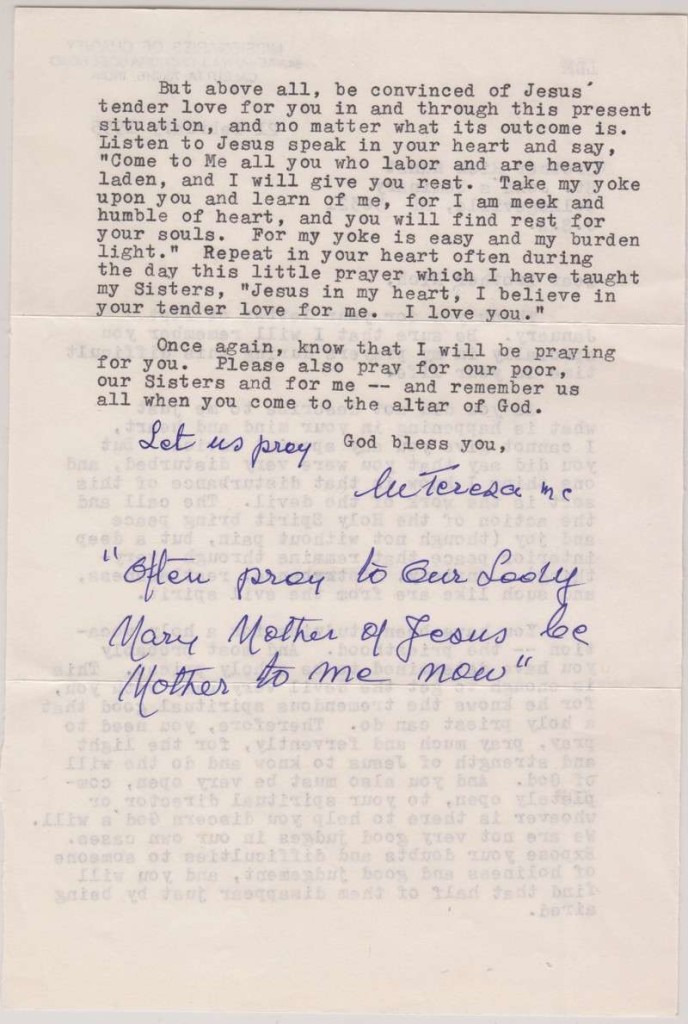 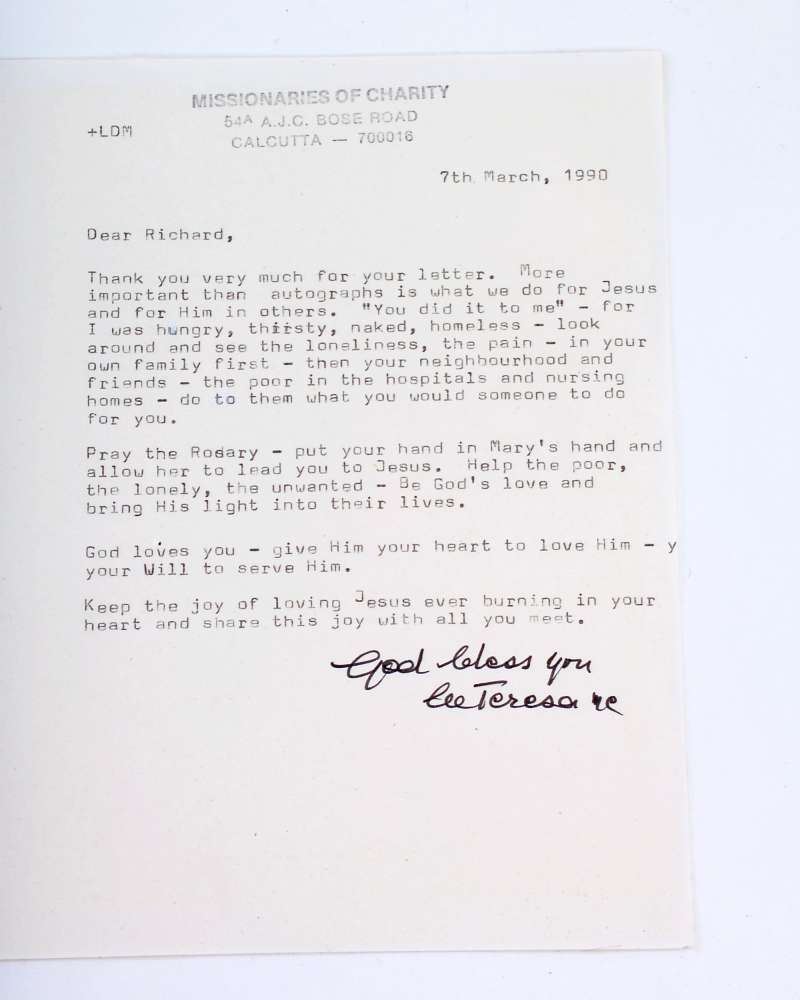 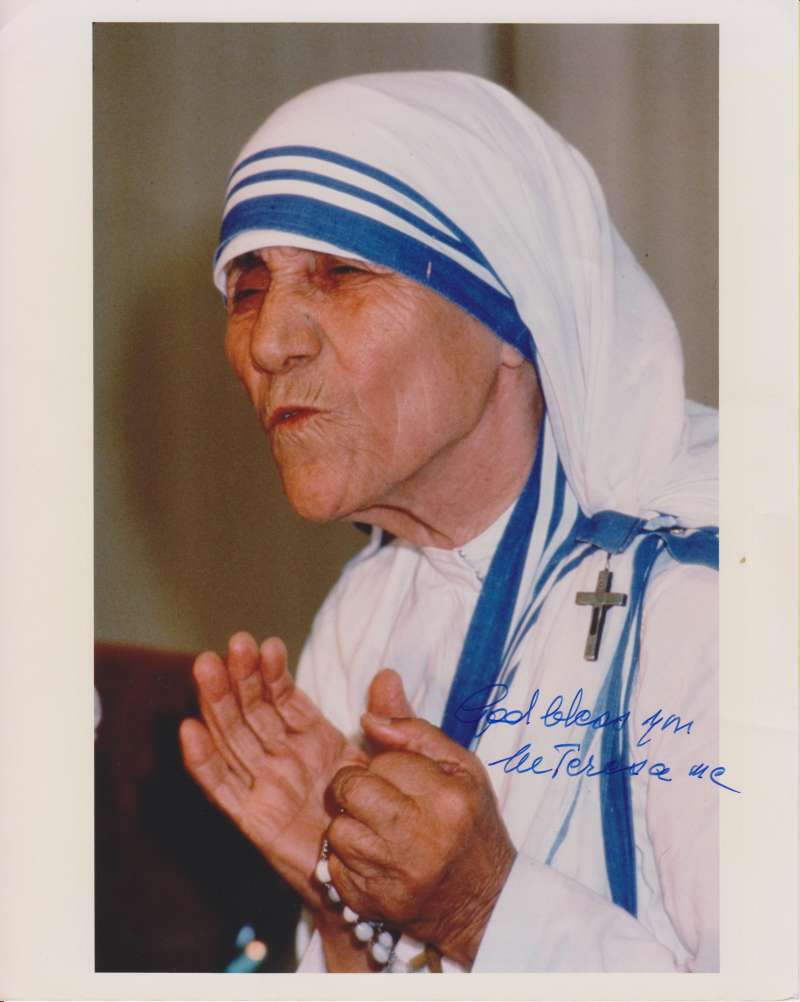 The following biographical information is excerpted from A Revolution of Love, The Meaning of Mother Teresa by David Scott in a review by Elizabeth Mauro. It is used with permission from the September/October 2005 issue of Lay Witness magazine. Copyright 2005, Catholics United for the Faith / www.cuf.org

She told us, Elizabeth Mauro says, that love begins where the self leaves off. You must first forget yourself, so that you can dedicate yourself to God and your neighbor. (While that sounds simple) Mother Teresa was perfectly serious in her challenge, and that far from being a trite, easily shrugged off idea, what she was preaching was something quite radical.

In fact, particularly in our age of boundless self-involvement and exhortations to self-love, Mother Teresa proposes an idea of true revolution, the revolution of completely abandoning the concerns of self so as to look only at Jesus and at the people who share our world.

It is striking to consider that both Mother Teresa and her contemporary, Pope John Paul II (1978 –2005) came from war-torn Eastern European countries in which human life was held cheap, where invasion was common, and self preservation was a daily mission. Given such backgrounds, one might expect them to abhor any raiding of their personal lives, to hold the world at arms length. And indeed, for a short time, Teresa was secure behind the high walls of the private school where she taught, just as John Paul was comfortable in his bishop’s lodgings. But urged on by Christ, both cast off the safety nets and sequestered surroundings to stride boldly into the world in utter surrender. They willingly rejected self-interest and allowed their personal spaces and lives to be plundered again and again.

From the filthy gutters in which she found and ministered to the poorest of the poor, Mother Teresa looked up at the relentlessly materialistic world and pointed out how spiritually impoverished and needy it was. She recognized, as perhaps only a survivor of invasion and oppression could, that good and evil could often look remarkably alike, and that the best way to differentiate between them was to look beyond oneself, surrendering all in service of others.

Mother Teresa’s life included dark episodes. Like scores of other holy people, she found herself living through decades of a long dark night of the soul, a profound sense of being abandoned by God. Her writings on this matter are moving:

Lord, my God, who am I that You should forsake me? The child of Your love, and now become as the most hated one. The one You have thrown away as unwanted, unloved. I call, I cling, I want, and there is no one to answer. Where I try to raise my thoughts to heaven, there is such convicting emptiness that those very thoughts return like sharp knives and hurt my very soul. Love, the word, it brings nothing.

And yet, even when feeling profoundly abandoned, Teresa never deviated from the mission she felt called to carry out. In her words to a priest, himself undergoing a dark night, one sees how she was able to move beyond the pain of her emptiness. Once again, the solution is rooted in self-abnegation. In you today,Jesus wants to relive His complete submission to His Father, she wrote to that priest. It does not matter what you feel, but what He feels in you. You and I must let Him live in us and through us in the world.

Mauro ends her review of this biography stating that this is the most revolutionary idea of our time.

Mother Teresa died on September 5th, 1997. There were 4,000 Missionaries of Charity at the time of her death and by the 1990’s over one million co-workers aiding in the ministry she began. 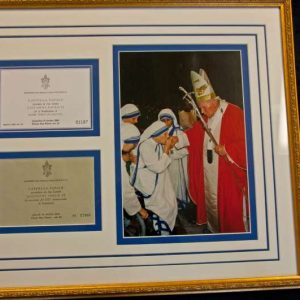 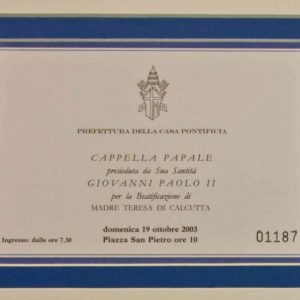 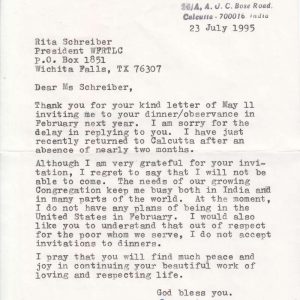