December 11–On the 3rd Sunday of Advent: A Commentary from Fr. Richard Kunst 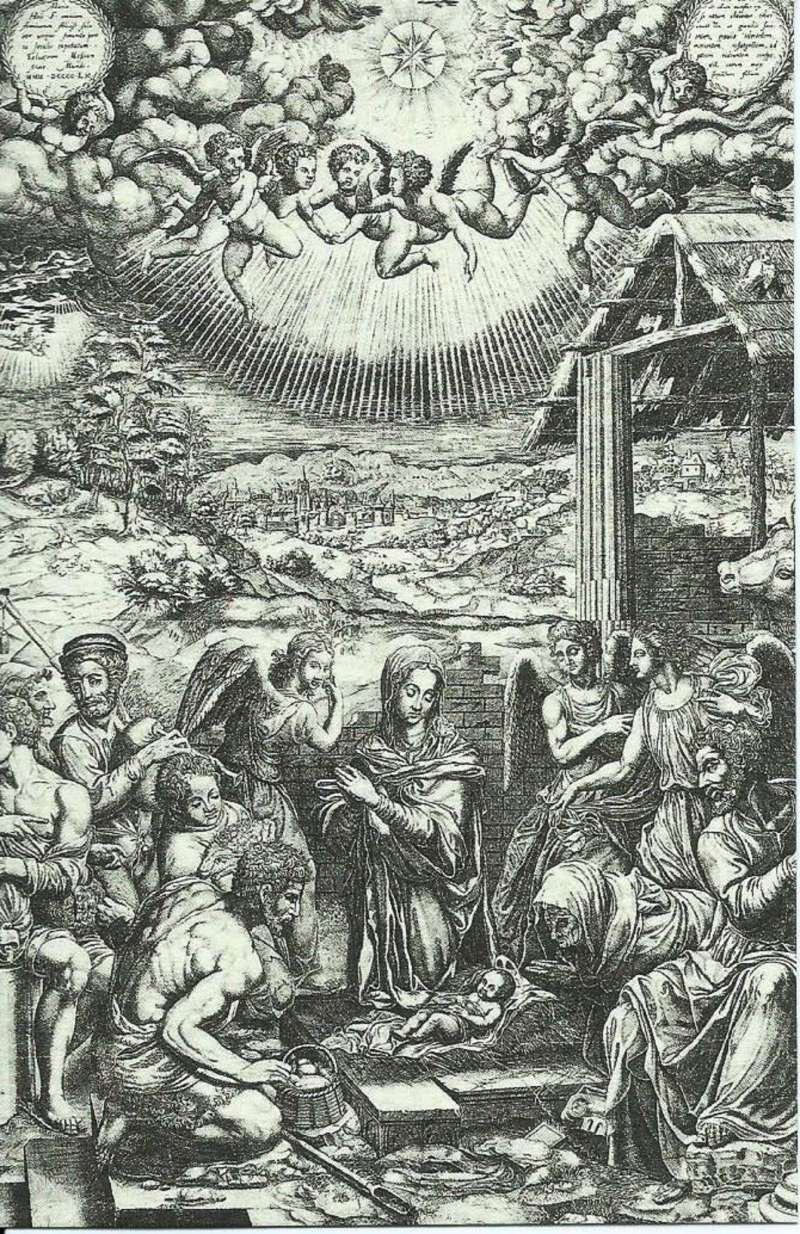 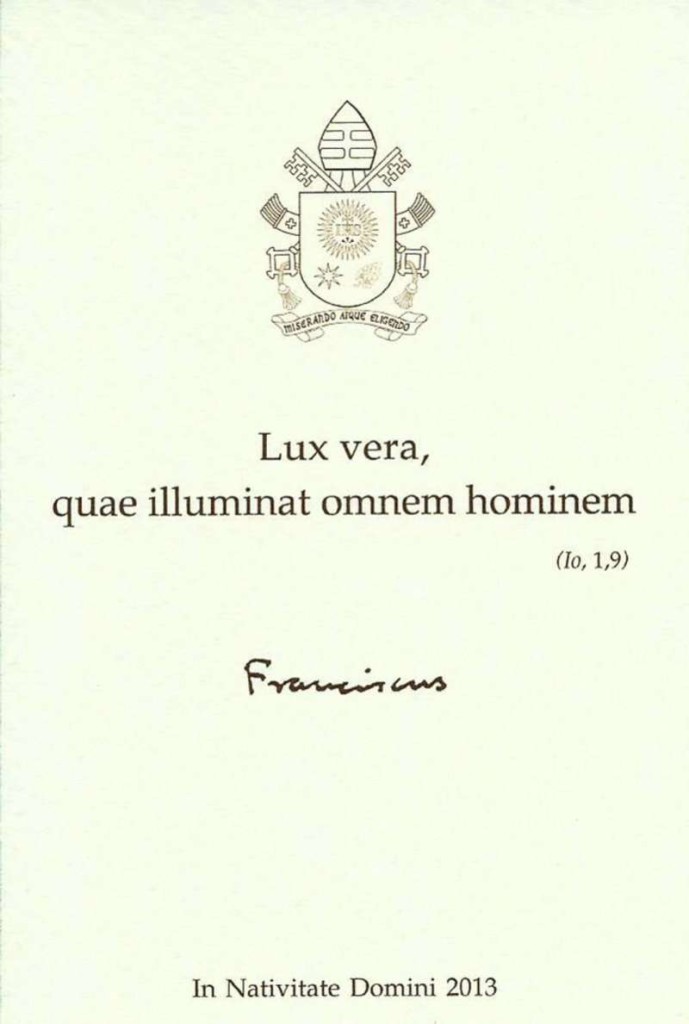 A Christmas Wish from Pope Francis 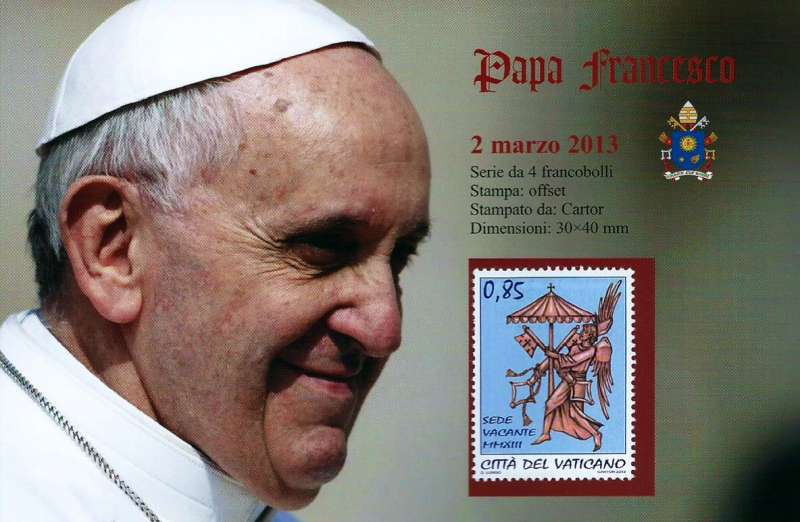 The message Pope Francis chose for this Christmas holy card is from the Gospel of Saint John: Chapter 1, verse 9:
The true light, which enlightens all men, (was coming into the world.)

Pope Francis’ coat of arms adorns the top of the card, and In Nativitate Domini: The Nativity of Our Lord 2013 is at the bottom. 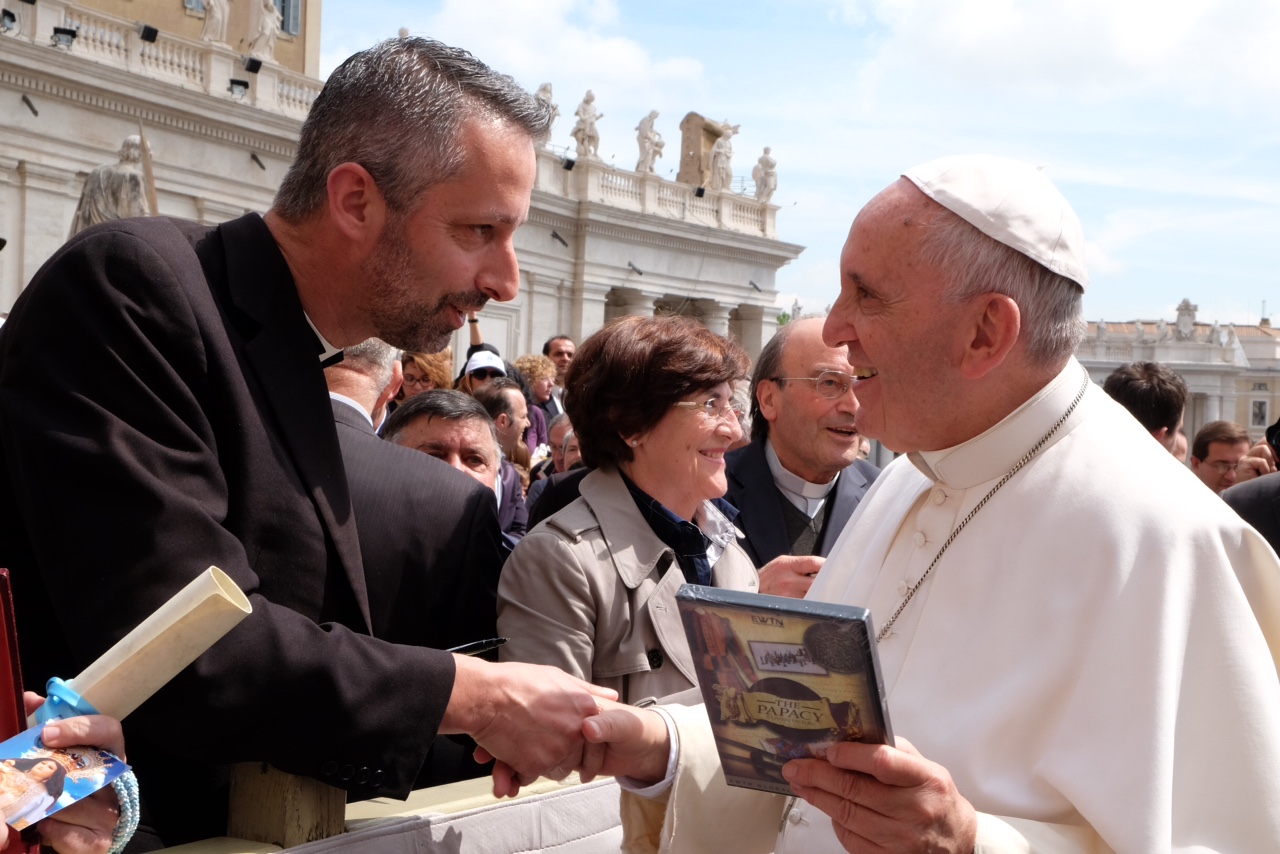 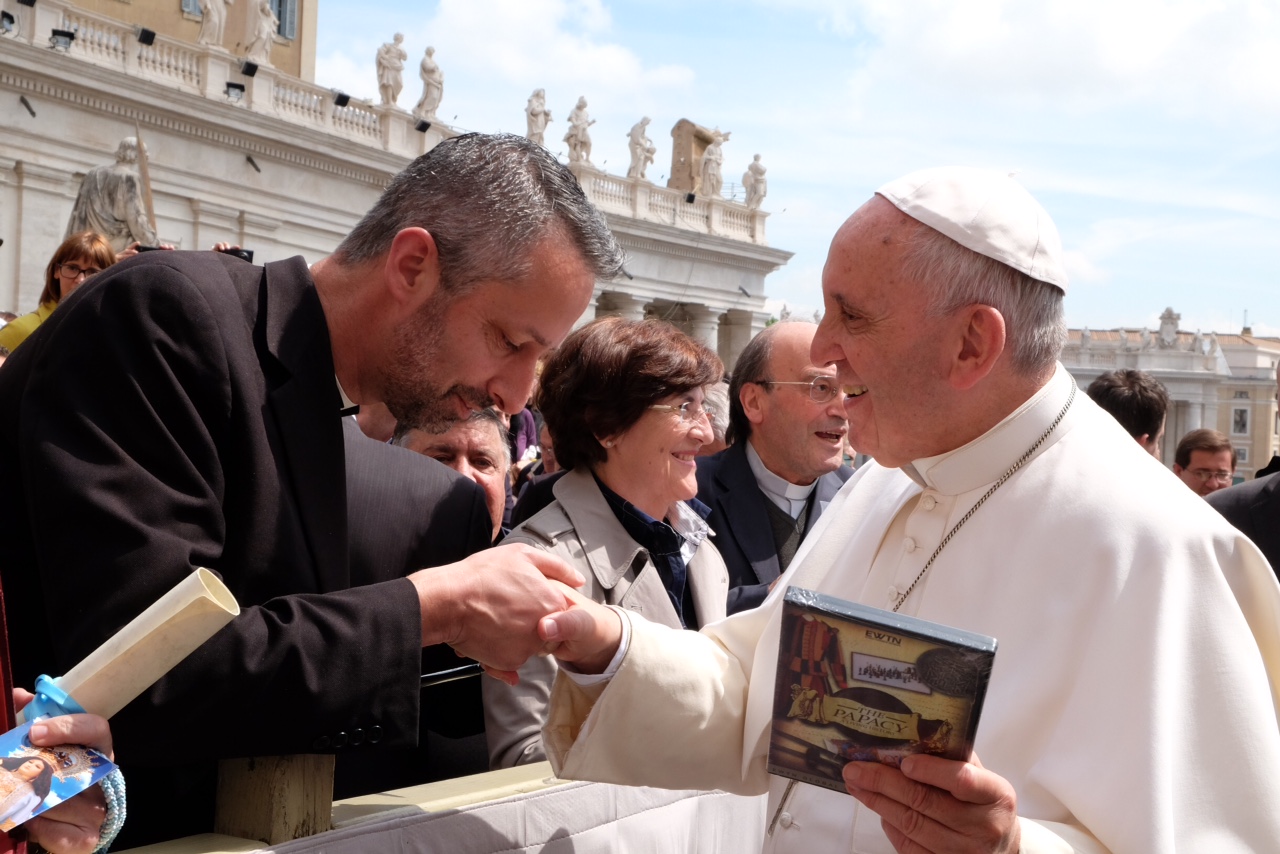 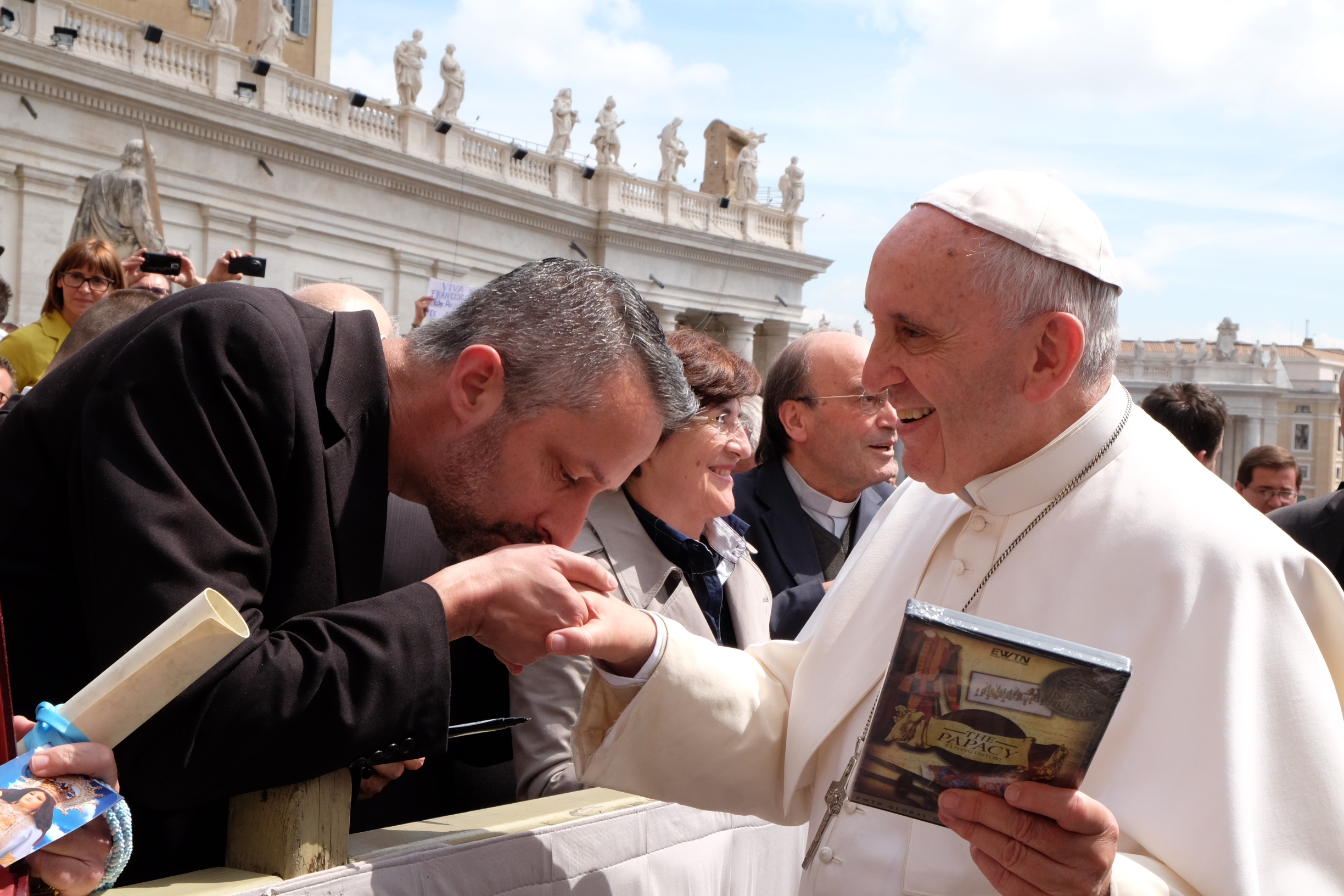 Inviting ‘Christmas and Easter Catholics’ Back to Mass Should Be Our Main Goal
Fr. Richard Kunst

I like to bring humor into classes I teach and homilies that I preach, because I think humor is a good way to get through to people about the importance of faith.

As I look back on my ministry I remember many times when certain points of humor were particularly well received. One was several years ago, right before Mass started at my parish of St. Joseph  in Gnesen (the prettiest parish in the Diocese of Duluth, if you ask me).  St. Joseph’s is a small, rural parish, so there tend to be other critters in the area besides humans.  It was during Advent when someone inadvertently allowed two dogs to sneak in the door.  They were good-sized dogs, and they ran up and down the aisle of the small church, which caused a bit of a stir with the parishioners.  After the dogs were finally corralled and let out, I told the congregation that I can tell Christmas is getting near, because I hadn’t seen those two dogs since Easter.

The crowd loved it.  The point, of course, was not to call holiday Mass-goers dogs but to make light of the unfortunate reality of so many people who only go to Mass once or twice a year.

For priests, there is a “threading of the needle’ when it comes to how we react to these people who show up to Mass on Christmas and Easter.  Speaking only for myself I find it exasperating, and I wonder how these people even have the gall to come those days.  That at least is my deep inner thought.  Shaking their hands before and after Mass, I am tempted to say not-so-nice things, but that is only a temptation, which I would be very wrong to actually carry out.  This speaks more to my own broken human nature and definitely should not be the way we respond to the “Christmas and Easter Catholics.”

The church has to be able to meet people where they are in their faith journey, and as Mary Poppins said, “A spoonful of sugar makes the medicine go down.”  All faithful Catholics need to be welcoming, loving and open to our brothers and sisters whose faith is weaker, and this is especially the case for me and my brother priests.  Our primary objective should never be to shame the people who come only during the holidays; our primary objective should be to make sure they come back next weekend and the weekends after that.

We, as Catholics, have the greatest thing going; we have Jesus Christ in the Eucharist, and our desire should be to make sure that is shared with our fellow Catholics.  Granted, outside of family and friends and other personal circles, most people do not have the opportunity to influence people.  This is where the “threading of the needle” comes in for us priests.

For many years I have admittedly done this poorly.  At the end of Christmas and Easter Masses, I would tongue-in-cheek announce the weekly Mass times as an unsubtle hint to the infrequent attenders.  I would do this with an unfortunate tone that only the regular Mass attenders would find humorous.

This sort of approach never achieved the true desired outcome, which was getting these folks to come to Mass more often.  Recently I have still been addressing it, but in a much more upbeat and welcoming way, and sometimes I still announce our Mass times!  But it is all in the tone, and I have to admit that it has been working.  Over the past few years, I have had small numbers of people come back after my invitation, which has been the point all along.

This problem of the infrequent Mass goers is far from being only an American problem.  Pope Benedict XVI, while he was cardinal, addressed the phenomenon is a book-length interview by Peter Seewald.  In the book title, “God and the World,” the future pope said this: “I have nothing against it, then, if people who all year long never visit a church go there at least on Christmas night or New Year’s Eve or on special occasions, because this is another way of belonging to the blessing of the sacred, to the light.  There have to be various forms of participation and association; the Church has to be inwardly open” (442).

So this coming Christmas Eve, when you see someone in your spot in the pew whom you vaguely remember from last April, don’t get upset with them.  Welcome them, and if you have the courage, invite them back to that spot next Sunday as well. 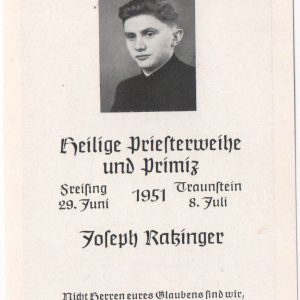 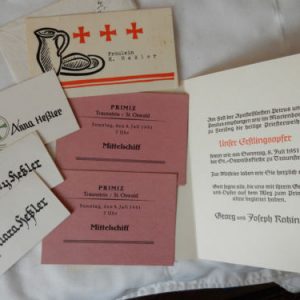 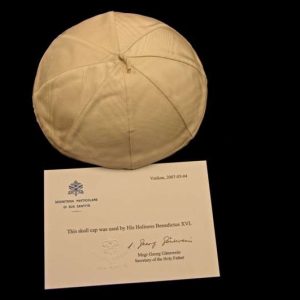 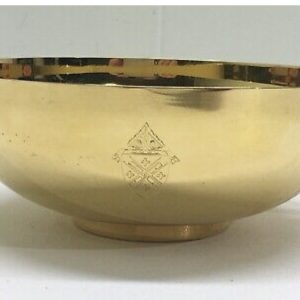 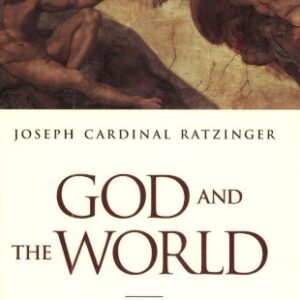 God and the World: A Conversation with Pope Benedict XVI