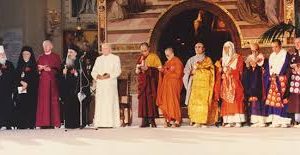 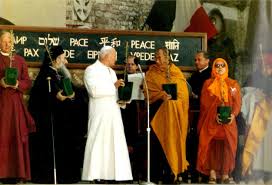 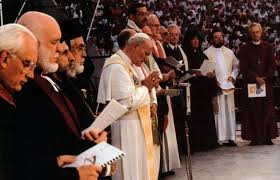 In the inter religious movement, Oct. 27, 1986 stands out as a landmark moment when Pope John Paul II convened representatives of the world’s religions to gather at the Church of Saint Francis of Assisi, Italy to pray together for the first time in history.

Thirty-five years ago at the closing of the Assisi World Day of Prayer, Pope John Paul II remarked:

For the first time in history, we have come together from every where, Christian Churches and Ecclesial Communities, and World Religions, in this sacred place dedicated to Saint Francis, to witness before the world, each according to his own conviction, about the transcendent quality of peace. The form and content of our prayers are very different, as we have seen, and there can be no question of reducing them to a kind of common denominator. Yes, in this very difference we have perhaps discovered anew that, regarding the problem of peace and its relation to religious commitment, there is something which binds us together.

And in the words of his biographer, George Weigel,

“The World Day of Prayer for Peace at Assisi was the most visible expression of John Paul’s conviction that all truth is related to the one Truth, who is God. That conviction undergirded his initiatives with Islam, which holds a distinctive place within the tradition of Abraham, and with his dialogue with the Dalai Lama, and with his approach to other great world religions. Respect for the religious convictions of others without compromising one’s own convictions seems impossible, but for John Paul, that possibilbity could be created.”

The World Day of Prayer for Peace was one more way Blessed John Paul was living out the conviction he preached at his papal installation: “Be not afraid!”

In innumerable ways, Blessed John Paul II changed the lives of millions and changed the course of history. Papal Artifacts takes pride in honoring this beloved Holy Father on this very special anniversary.