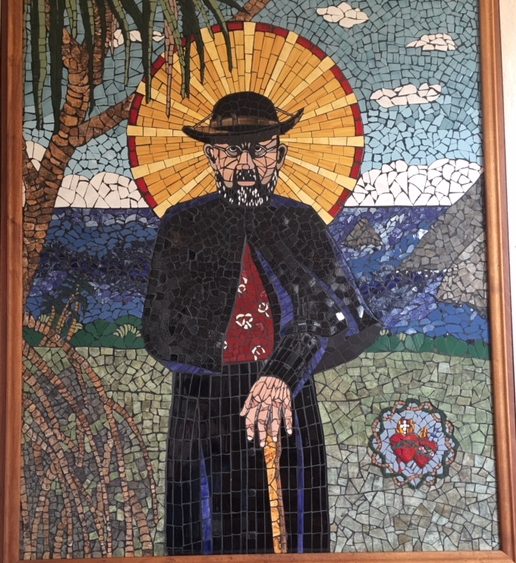 October 11, 2009: The Canonization of St. Damien of Molokai & Commentary from the Curator

A Few Minutes with a Saint & Father Richard Kunst
A Feature of  Papal Artifacts/Saints & Blesseds
Fr. Damien of Molokai’i

NOTE: The statue in the US Capitol to which Fr. Kunst refers is featured at the bottom of this post. 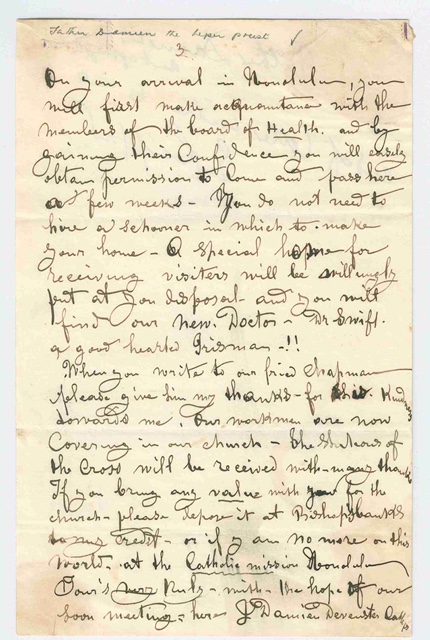 In Word Shadows of the Great, Thomas Madigan writes, “Without doubt Damien wrote few letters and it is not unlikely that many of those which come from his pen during the leper colony days were destroyed by the recipient.”  He adds that he had owned the only two known letters by Damien.  I must agree that Damien can be considered excessively rare.  I can find no record of sales, at any rate, in auction or dealer catalogs for the past ten years.  This letter is used to illustrate Damien’s autograph in Ray Rawlin’s Stein and Day Book of World Autographs.

In 1977, Pope Paul VI declared Father Damien to be venerable. On 4 June 1995, Pope John Paul II beatified him and gave him his official spiritual title of Blessed. On 20 December 1999, Jorge Medina Estévez, Prefect of the Congregation for Divine Worship and the Discipline of the Sacraments, confirmed the November 1999 decision of the United States Conference of Catholic Bishops to place Blessed Damien on the liturgical calendar with the rank of optional memorial. Father Damien was canonized on 11 October 2009 by Pope Benedict XVI. His feast day is celebrated on 10 May. In Hawaii it is celebrated on the day of his death, 15 April.

Two miracles have been attributed to Father Damien’s posthumous intercession. On 13 June 1992, Pope John Paul II approved the cure of a nun in France in 1895 as a miracle attributed to Venerable Damien’s intercession. In that case, Sister Simplicia Hue began a novena to Father Damien as she lay dying of a lingering intestinal illness. It is stated that pain and symptoms of the illness disappeared overnight.

In the second case, Audrey Toguchi, a Hawaiian woman who suffered from a rare form of cancer, had remission after having prayed at the grave of Father Damien on Molokaʻi. There was no medical explanation, as her prognosis was terminal.  In 1997, Toguchi was diagnosed with liposarcoma, a cancer that arises in fat cells. She underwent surgery a year later and a tumor was removed, but the cancer metastasized to her lungs. Her physician, Dr. Walter Chang, told her, “Nobody has ever survived this cancer. It’s going to take you. Toguchi was surviving in 2008.

In April 2008, the Holy See accepted the two cures as evidence of Father Damien’s sanctity. On 2 June 2008, the Congregation for the Causes of Saints at the Vatican voted to recommend raising Father Damien of Molokaʻi to sainthood. The decree that officially notes and verifies the miracle needed for canonization was promulgated by Pope Benedict XVI and Cardinal José Saraiva Martins on 3 July 2008, with the ceremony taking place in Rome and celebrations in Belgium and Hawaii. On 21 February 2009, the Vatican announced that Father Damien would be canonized. The ceremony took place in Rome on Rosary Sunday, 11 October 2009, in the presence of King Albert II of the Belgians and Queen Paola as well as the Belgian Prime Minister, Herman Van Rompuy, and several cabinet ministers, completing the process of canonization. In Washington, D.C., President Barack Obama affirmed his deep admiration for St. Damien, saying that he gave voice to voiceless and dignity to the sick. Four other individuals were canonized with Father Damien at the same ceremony: Zygmunt Szczęsny Feliński, Sister Jeanne Jugan, Father Francisco Coll Guitart and Rafael Arnáiz Barón. 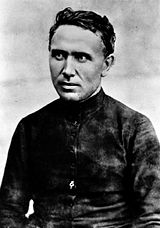 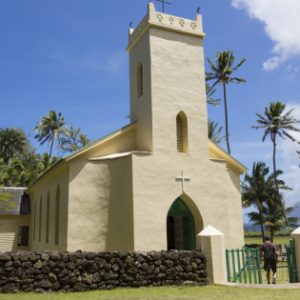 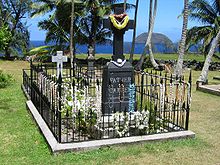 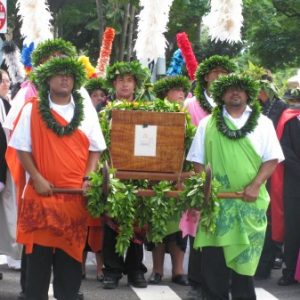 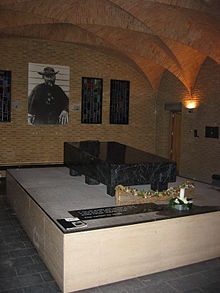 Grave of Saint Damien in the crypt of the church of the Congregation of the Sacred Hearts in Leuven, Belgium 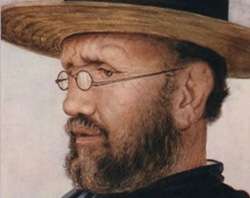 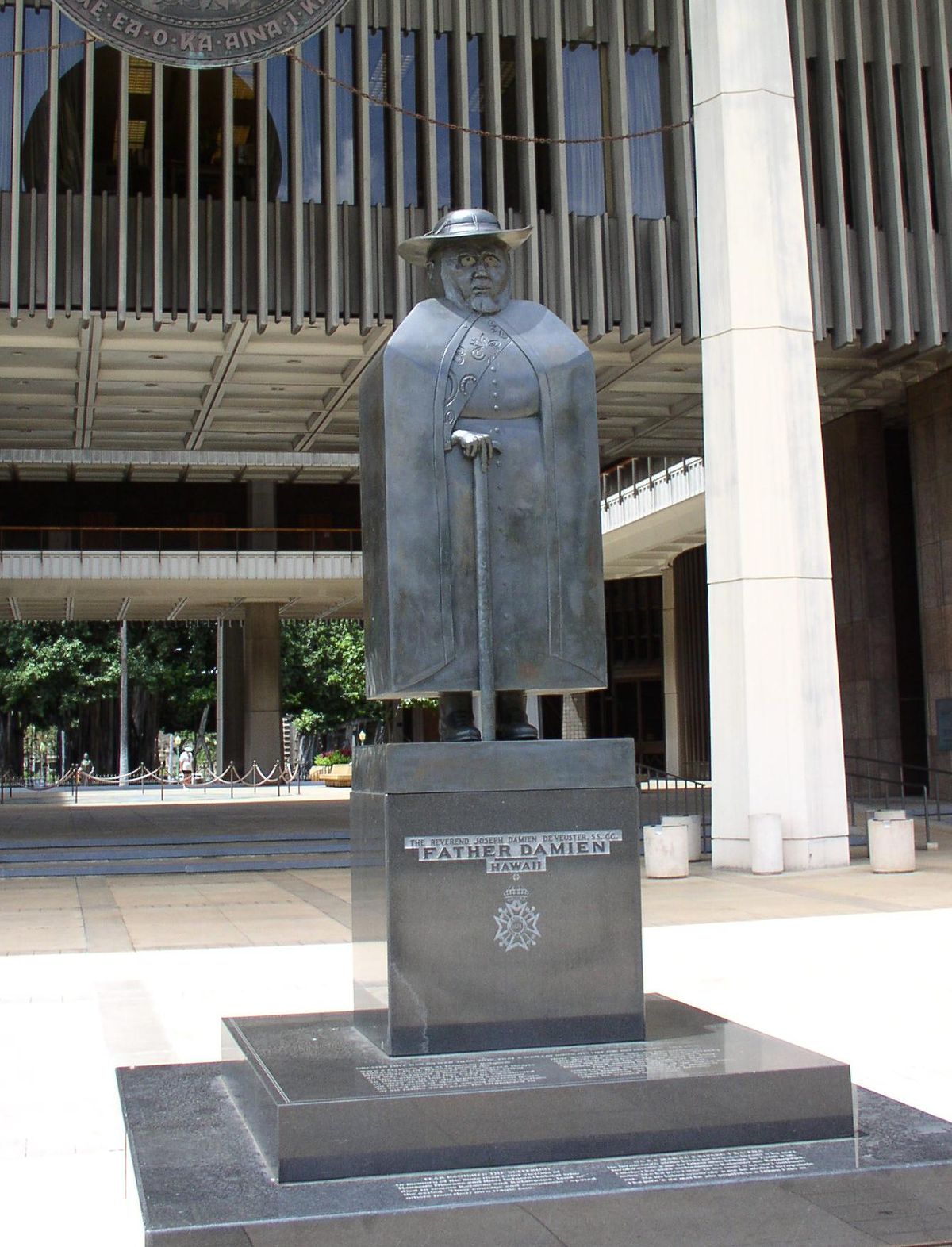 St. Damien of Moloka'i Statue in US Capitol