November 1, 1946: Remembering Saint John Paul II on the Anniversary of His Ordination, & A Commentary by the Curator 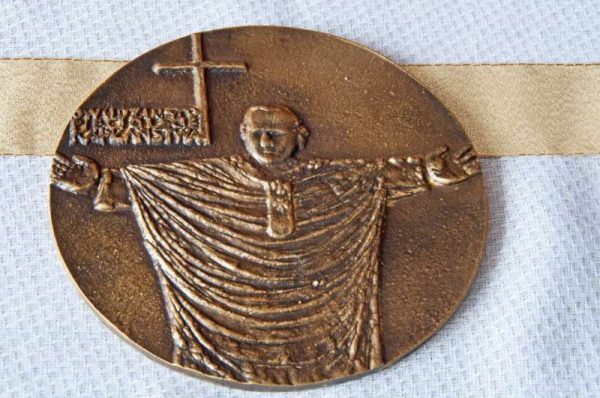 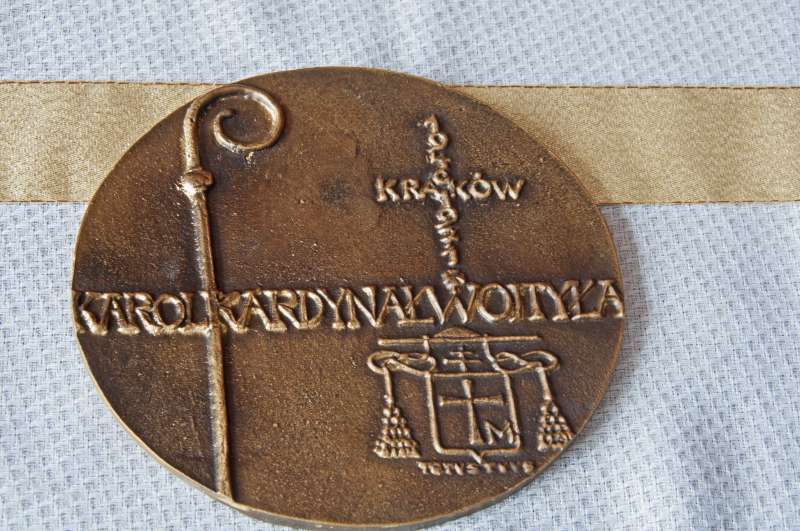 November 1, 1946: Remembering Saint John Paul II on the Anniversary of His Ordination, With a Commentary on the Medal by Father Richard Kunst & Father Ryan Moravitz 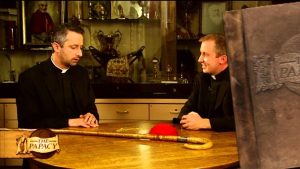 One of the more common things for a cardinal, or maybe even a bishop, and certainly for a pope, is to actually have medals or medallions issued for certain significant events in their time of being a cardinal or a bishop. This is an interesting piece. It’s a fairly large medal—larger than normal—of Cardinal Wojtyla on the 25th anniversary of his ordination, which was November 1, 1971. So it says, “1946-1971, Krakow.” And it has his cardinal coat of arms that we see very familiarly as pope. The other side has the actual image of him.

And so any item associated with any pope prior to their pontificate, and before they got really world famous, is another really nice addition.

We recognize here, on his coat of arms, his motto, Totus Tuus, and then he has the symbol of the cross and the M for Mary. “To Christ through Mary” was a big thing for our Holy Father, John Paul II. He kept his coat of arms with these things. In some cases with some popes there’s a little bit of an adjustment on their coats of arms once they become pope, but for the most part they are recognizable from their time as cardinal-bishop to pope. The thing that might change the most is the hat.

Pope Benedict changed his a little bit and so did Pope Francis. John Paul II really kept his coat of arms the same.

The closeness to Christ and Mary: it’s that great call and realization of what it means to be a saint, to be holy. And we are drawn to the Lord. And in a particular way we draw to Him through the heart of Mary, through her intercession. He really modeled that for us and for our Church. It’s certainly one of the main reasons that we would declare him and recognize him to be a saint.

He became very “Marian” at a young age because he lost his mother at such a young age, and so he basically looked at the Virgin Mary as being his new mother biologically even. His devotion really came out of the loss of his biological mother. When he was elected pope, he got some pressure to change his coat of arms, because those who are really interested in heraldry didn’t like the idea—it’s not traditional—to have the letter, M, and a cross on the coat of arms. It’s very unique, but he didn’t bow to that pressure.

Artifacts belonging to or associated with Saint John Paul may be found on Papal History/Saints & Blesseds/John Paul II.  His biography, youtube, additional pictures and coat of arms and burial site in St. Peter’s Basilica are also featured.

Papal Artifacts is honored to celebrate the anniversary of his ordination.

In his 2005 book, Memory and Identity, Pope John Paul II spoke of the great evil of the 20th century, but the hope that is ours because of the love and grace that come to us through Jesus.

The evil of the 20th century was an evil of gigantic proportions. At the same time Divine Grace has been super abundantly revealed. There is no evil from which God cannot draw forth a greater good. There is no suffering which he cannot transform into a path leading to him. Offering himself freely in his passion and death on the cross, the Son of God took upon himself all the evil of sin.

The Passion of Christ on the cross gave a radically new meaning to suffering, transforming it from within. It introduced into human history, which is the history of sin, a blameless suffering accepted purely for love. It is this suffering which burns and consumes evil with the flame of love and draws forth even from sin a great flowering of good. In that love that pours forth from the heart of Christ we find hope for the future of the world.

Christ has redeemed the world by his wounds. We are healed.