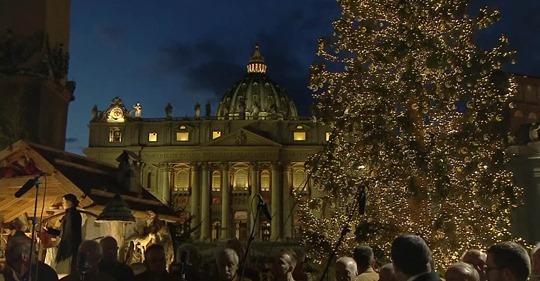 The tradition is repeated every year around this time. It marks the start of the Christmas season in the Vatican. The tree in St. Peter’s Square is lit up and the Nativity scene, announcing the birth of baby Jesus, is unveiled.

It was still light out when the ceremony began. This Alpine choir was in charge of the carols.

There were typical dances with this choreography including flags.

Some minutes later, little Gemma and Diego did the honor of lighting the Nativity scene.

Last year’s surprise was the Nativity scene made of sand. This year it is made of wood, a more traditional material.

The Nativity is composed of 20 figures from the town of Scurelle, in the northern Italian region of Trento.

The scene includes some wooden pieces from the Triveneto region, which was affected by heavy floods in 2018. This gesture honors the victims of the storm.

The red spruce also comes from northern Italy, from the Vicenza region. It was lit up at exactly 5:15 p.m.

It is 85 feet tall. To replace it, 40 more spruce trees will be planted in the forest.

The lights of the Nativity scene and the tree in St. Peter’s Square will stay on until Jan. 12. That day, the Church celebrates the Baptism of the Lord, which marks the end of the Christmas season.