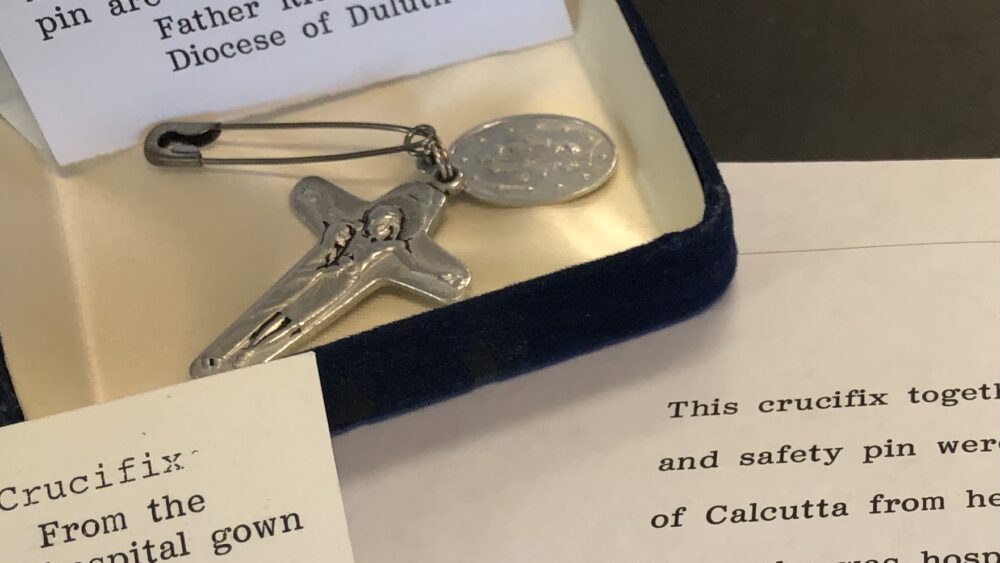 Statement from Bishop Robert Brom regarding this 2nd class reli

She sent it, no doubt, because after Mother’s miraculous recovery from near death in 1992 here in San Diego I advised Sister Nimala to start saving Mother’s hair whenever she had a haircut toward developing relics.

NOTE: This first class relic is on loan to the Papal Artifacts’ Collection.

Mother Teresa of Calcutta was listed as “seriously ill” in a San Diego hospital Monday after heart failure prompted doctors to perform a procedure to open a blocked artery.

The 81-year-old Roman Catholic missionary and Nobel Prize winner is responding to treatment but will be hospitalized at the Scripps Clinic and Research Foundation for at least a week, said clinic spokeswoman Sue Pondrom.

Mother Teresa was admitted to the world-renowned clinic on Thursday for treatment of bacterial pneumonia. On Saturday, she developed symptoms of myocardial ischemia–an inadequate blood supply to the heart, Pondrom said.

The inadequate blood supply interferes with the heart’s ability to circulate blood, and as the heart fails, fluid accumulates in the lungs and elsewhere in the body.

In that procedure, a tiny balloon device is threaded via a catheter through the skin into a vein and then to the blocked artery. The balloon is then inflated to force open the narrowed vessel. A stent–a thin, cylindrical, slotted tube–was expanded within the vessel, providing a sort of scaffolding to hold open the artery, Pondrom said.

Within four to six weeks, the small metal device will become incorporated into the arterial wall, be covered by a lining of cells and remain there permanently.

Assuming Mother Teresa responds to this treatment, no further procedures are planned, Pondrom said. But she said doctors would not speculate on what long-term medical attention Mother Teresa will need because of the problem.

The ailing nun is “surprisingly energetic, given her age and what she’s been through with the pneumonia and angioplasty,” said Bishop Robert Brom of the Catholic Diocese of San Diego, who visited Mother Teresa on Saturday and Monday.

“She keeps talking about how Jesus expects this suffering for a reason, for the good of the church, for the success of her missionary work.”

Her spirits, Brom said, were “very, very high,” although she was upset because the hospitalization will force her to cancel scheduled appointments in Rome next week.

Brom said Mother Teresa has, through her religious community in Tijuana, received word that Pope John Paul II, “immediately prayed for her and asked that his personal best wishes and promise of continued prayer be communicated back to her.”

Brom described the nun, who is secluded in an intensive care unit, as “sitting up and alert.”

“When she saw me (on Monday), she said, ‘Oh, bishop, it’s so good to have you come and see me. I hope I’m not causing you too much work.’ We prayed together, and I offered her my blessing.”

Brom said that when he saw Mother Teresa on Saturday, “she was hoping to be out early this week. Now, she just wants to be out as soon as possible. She wants to be on her way to Rome. And the doctors are trying to help her understand that she won’t meet that schedule.”

Mother Teresa, known as the “Saint of the Gutters,” gave up a position as convent teacher to care for people in Calcutta’s infamous slums. In 1965, her Missionaries of Charity order was granted official recognition by Pope Paul VI as a society of pontifical right, enabling it to operate worldwide.

She won the Nobel Peace Prize in 1979 for her work “among the poorest of the poor” and wore a $1 blue-and-white sari to receive it.

The Nobel laureate was bedridden in Calcutta in 1989 because of a weak heart and a high fever.

Mother Teresa had been in Tijuana since Dec. 11, the last stop of a worldwide visit to local Missionaries of Charity communities.