Blog
Papal Artifacts / Father Richard Kunst / May 10, 2014: In Defense of Pope Pius XII: A Commentary by the Curator, Fr. Richard Kunst
May 09 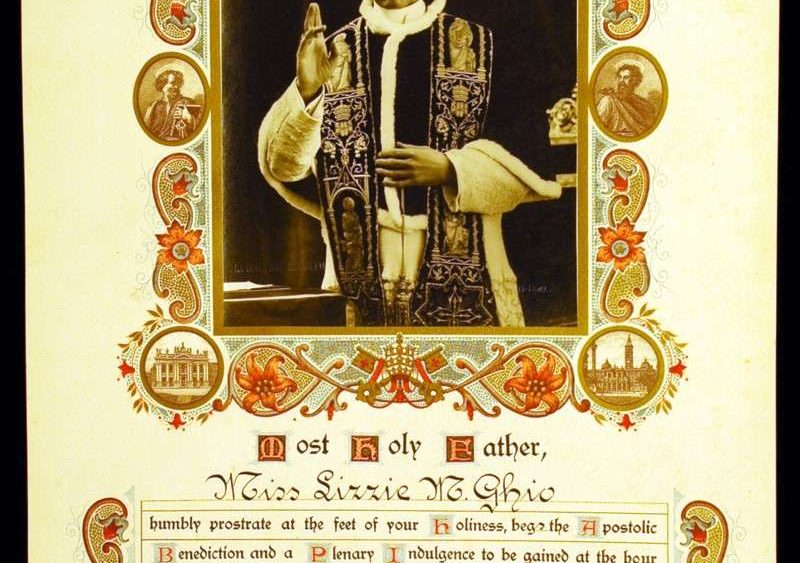 Father Richard Kunst has written many times about the unjust treatment Pope Pius XII has received, resulting in a damaged  image of a Pope whose history has proven to have helped and saved a majority of the Jewish population in Rome alone.  Trying to balance his desire to save both the Jewish and Catholic populations from the savagery of the Fascists and Nazis will only become more obvious as time progresses.

Father Kunst wrote in response to a series that was held  at the University of Minnesota in Duluth where a portion of the play, “The Deputy,” was being staged. The play vilifies Pope Pius XII in his efforts to aid the Jewish community during the Holocaust. No Catholic participation was sought in the planning of this series, nor were efforts to meet with members of the academic community allowed. Father Kunst’s voice was a principle contribution to the local community’s efforts to defend Pius. The series went on as planned, and the internet was  bombarded with information about our efforts.

The 20th century was a tragic one — the only century ever to have two “world wars.” German President Adolph Hitler rightly is demonized for many horrors of World War II. But, amazingly, another man often is blamed for much of it, too. Or, at the very least, Pius XII, pope from 1939 through 1958, is blamed for not trying to prevent the killings of 6 million European Jews.

The character assassination of this truly great pope came as a result of a bizarre play written in 1963 by Rolf Hochhuth. It was called “The Deputy.” It portrayed Pius as a coward who was influenced by Hitler himself. It inspired other works, such as the 1999 book, Hitler’s Pope, written by John Cornwell, which was based on weak and spurious “documentation and research.”

The play and the books that followed have been proven to be completely fictitious by countless scholarly studies.

Nonetheless, the University of Minnesota Duluth is staging Act IV of “The Deputy” as part of a Baeumler Kaplan Holocaust Commemoration series this month titled, “Religious Institutions’ Responses to the Holocaust.” Pius XII is featured as a target of hate in this series with the university’s College of Liberal Arts apparently expecting the Catholic community to be comfortable with it since we were told, after repeated attempts to confer with school officials, that we could participate in a discussion after the play if we chose to.

Not once was a member of the Catholic community invited to lead a discussion to counter this play’s malicious information or to be part of the planning committee of the commemoration series.

Most spurious was that the announcement of this play was sent to the public via a postcard that depicted a Nazi officer and a Catholic cardinal standing on the body of a dead Jewish man. To the right on the postcard was the image of Pope Pius XII with a swastika beneath him. Is this “academic freedom?” Would it be acceptable to defame any other religious leader or religion quite like UMD is doing with Pope Pius XII and the Catholic Church?

In a short conversation Monday with UMD Chancellor Lynn Black I requested that “The Deputy” be canceled because of its defamatory content vilifying Pope Pius XII. I am not the only Catholic person to address my concerns to the chancellor and to other members of UMD. At the present time I do not have any assurance our requests will be heeded in any way.

This play and the information it touts should not be a point of dialogue between members of the UMD community and the Catholic Church. Rather, there should be a joint effort to stop it.

Pope Pius XII’s contemporaries have been the most outspoken in praise of his work against Hitler and for his attempts to save the Jewish people. Albert Einstein and the future president of Israel, Golda Meir, lauded his wartime work. The chief rabbi of Rome during the Nazi occupation, Rabbi Israel Zolli, was so impressed by Pius XII’s heroic actions that he became a Catholic, adopting the Pope’s baptismal name, Eugenio, as his own baptismal name. Later, another chief rabbi of Rome, Elio Taoff, openly supported and pushed for Pius’ canonization after his death.

The Jewish Post of Winnipeg reported in its Nov. 6, 1958, edition, “For there probably was not a single ruler of our generation who did more to help the Jews in their hour of greatest tragedy during the Nazi occupation of Europe than the late Pope Pius XII.”

The bashing of Pope Pius XII by some in the media is stupefying. Consider the following quotes from New York Times editorials, written 57 years apart. “The voice of Pius XII is a lonely voice in the silence and darkness enveloping Europe this Christmas. … He is about the only ruler left on the Continent of Europe who dares to raise his voice at all,” the newspaper wrote on Dec. 25, 1941. On March 18, 1998, it offered, “A full explanation of Pope Pius’ conduct is needed. … It now falls to John Paul and his successors to take the next step toward full acceptance of the Vatican’s failure to stand squarely against the evil that swept across Europe.” These two quotes, in direct opposition to each other, show how much the reputation of Pius XII changed, the commendations by Jewish leaders forgotten and his saving acts of heroism maligned.

Pope Pius XII is accused of guilt by silence, of choosing not to speak out more forcefully against the atrocities Hitler was committing when he was someone who allegedly could have done so with an expectation of some positive effect. But what would have happened had he publicly condemned Hitler? What atrocities would that have unleashed not only against Jews all over occupied Europe but against all people of good will?

Pius and the Vatican were responsible for saving nearly 700,000 Jews from concentration camps by issuing false baptismal certificates, among other documented attempts to help. Regardless, slanderous and false material continues to be used against Pius.

Not only am I a Catholic priest and student of papal history, I am of Jewish heritage. My mother is Jewish. In “The Deputy,” Pius is a victim of hate speech. I took great offense at the promotion of this hatred and slander against a man who saved so many other Jews.

The YouTube Included Is from Rome Reports & Was Published on May 10, 2014