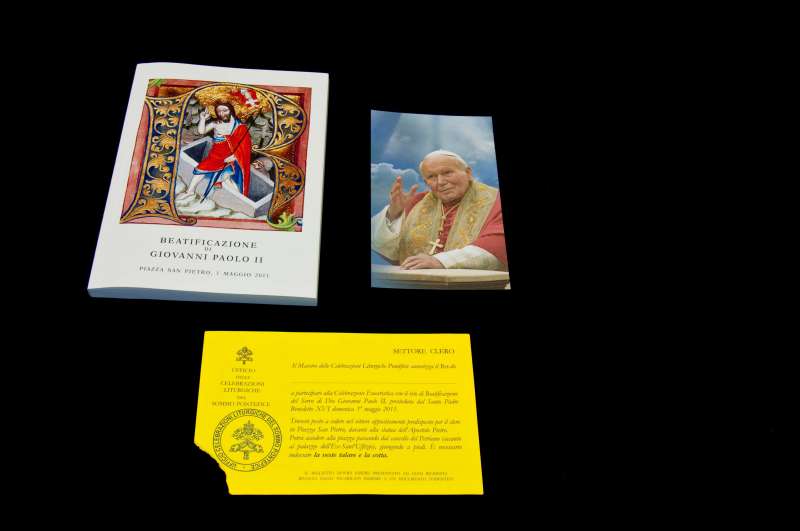 A Beautiful Story about the May 1, 2011 Beatification of Pope (now) St. John Paul II

On Sunday, May 1st, 2011, Pope Benedict XVI beatified John Paul II before one and one-half million people.  Among them was Father Richard Kunst, the Papal Artifacts’ Curator.  These items are from Blessed John Paul’s beatification.  They include the yellow ticket, the priest’s ticket, which permitted entrance to the ceremony, the Mass booklet used at the ceremony and the holy card given to those attending the ceremony.

Any time there is a special occasion at the Vatican, a booklet is produced to commemorate the occasion. They have glossy pages and are in various languages. Everyone attending receives a copy of these booklets. Father Kunst has dozens of these from various ceremonies including the 25th anniversary of Pope John Paul’s pontificate as well as his funeral.

Photos of these Mass Booklets from Various Ceremonies at the Vatican are featured below.

I always knew one way or another I was going to be at the beatification of John Paul II even before he died. My devotion to him is so great that I knew that if he were beatified, by God’s will I would be there. And God made it possible. When I was there a couple of unique things happened. We had the good fortune to stay at a Five-Star hotel, and because of that, there were some prominent people there, including Lech Walesa, the charismatic co-founder of Solidarity in Poland (see Glossary for further information about him).

Pope John Paul II worked closely with him to overthrow the Communist regime. I saw him in the lobby, although I didn’t get an opportunity to greet him.

The beatification ceremony itself was incredibly moving, and there were two occasions that stand out. One was when the crowd was asked to be silent in prayer, and one and one half-million people were silent together, when asked to be, for the sake of prayer and for remembering John Paul II. It was so moving to think all those people could be silent in prayer at the same time.

Another extremely moving time was  Sr. Maria Simon-Pierre, the nun who was cured of Parkinson’s disease, which was the miracle that lead to his beatification. She was the person who presented the first class relic to Benedict XVI. This was a vial of his blood in a silver reliquary. John Paul II had a rare form of blood, and so he always had his own blood with him when he traveled in case of an emergency. Those vials of blood have now become relics, and there are a handful of them owned by the hospital or by Cardinal Dzivisz, his Secretary of State. After Sr. Maria Simon-Pierre presented it to Pope Benedict XVI, he in turn gave it to the Polish nun who was the primary housekeeper for John Paul II, Sr. Tobiana, and then she carried it and put it on a stand set up near the altar of the beatification.

Another part of the ceremony that was absolutely amazing was  the continuous predictions of rain never materialized. It didn’t rain a drop. It was warm and sunny and totally confounded the weather predictions of bad and wet weather and some are calling that a minor miracle of Pope John Paul II.

It was a great experience to be present at the beatification and something I will not forget, something I can hold onto until, God willing, the canonization will occur and I will be able to attend. It was a very moving time, a very good time to be in Rome as well.   Father Richard Kunst 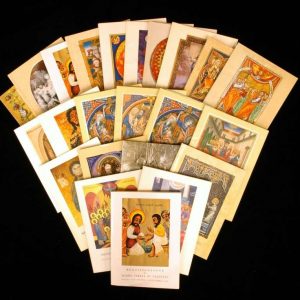 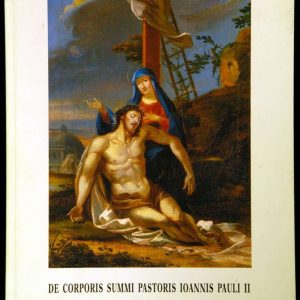 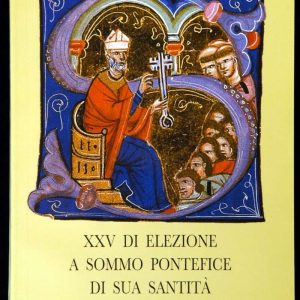 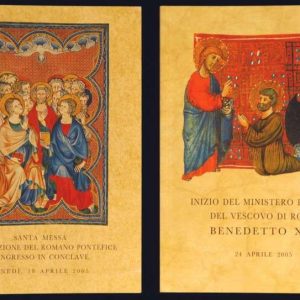 The 4th photo featured here is the Mass booklet for the ordination of Pope Benedict XVI.

The Anniversary of Pope St. John Paul Beatification
May 1, 2011