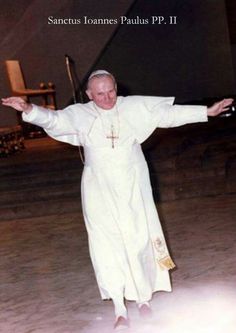 It’s part of history. Cardinal Wojtyła’s car broke down as he made his way to Rome for the Conclave. He was the last to arrive. By the time the Polish cardinal reached the Vatican, virtually all of the photographers were gone. But not Maurizio Riccardi. He stayed and captured the last image of him as a cardinal. He was elected Pope John Paul II shortly after the shot was taken.

This photo, and countless others over thirty years, make up the photographer’s massive collection. He closely followed Pope John Paul II, even before he was elected to the papacy.

“The Pope Who Flies” is this shot. It was taken during a general audience on Christmas, back in 1978. The Pope greeted the pilgrims with open arms as he moved, and Riccardi captured this unique image.

After a lifetime of memories shared with a giant of the faith, it is impossible to remember every significant picture. But with an exhibit open for a few days in Rome, Riccardi wants to pay tribute to the unforgettable Pope on the 10th anniversary of his death.

The photos focus on the Pope’s most recognizable gestures: his direct gaze, how he pointed his finger when he wanted to emphasize an idea, his smile or the tenderness he shared with pilgrims.

There is also an image that had a particularly strong impact on Pope John Paull II: It shows him with his predecessor, Pope John Paul I.

MAURIZIO RICCARDI
Photographer
“He was delighted with “The Pope Who Flies” picture and, above all, the one with two Popes. He liked it very much. He thought it was almost like a sign. I was excited.”

Riccardi has countless photos of the Polish pontiff in his files. They all portray a figure who passed every barrier and left a mark in history that won’t be forgotten.