Blog
Papal Artifacts / News / March 7, 1965: The Anniversary of the 1st Mass in the Vernacular in Italy
Mar 06

March 7, 1965: The Anniversary of the 1st Mass in the Vernacular in Italy 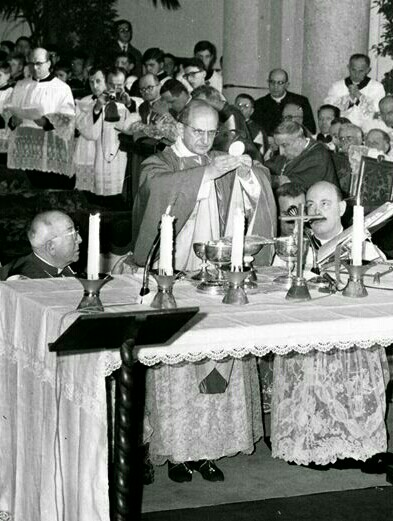 The item featured here is an original, limited edition Presentation Medallion commemorating the elevation of Pope Paul VI, signed by Paul VI. It features a graphic representation of the medallion issued for the event, Paul’s signature and date.

The piece comes with a Certificate of Authenticity, which states:

This item is perhaps, without a doubt, one of the most difficult and rarest of the ‘OFFICIAL’ documents to obtain from the Vatican

Hereby described as: Overall size 9 1/4″ X 12 1/2. At the top of the document (in Latin) is the statement attesting to the fact that the Medallion pictured commemorates the appointment of the new Holy Father – in this case – Pope Paul VI.

The medallion with the signature of Blessed Paul VI is of even greater significance as we celebrate the beatification of this beloved Pope.

Please visit Papal History/Saints & Blesseds/Paul VI to view the many items belonging to or connected to this Pope.

About the  Mass in the Vernacular:

The original Mass was celebrated by Paul VI on March 7, 1965, which happened to be that year’s First Sunday of Lent. The repeatedly vandalized plaque now marking the event goes so far as to say that it was this event that inaugurated the liturgical reform decreed by Vatican II.