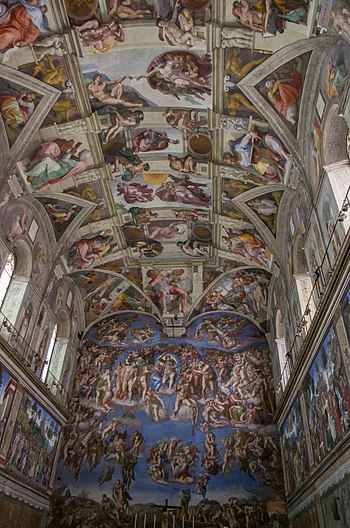 After four tortured years, more than 400 over-life-sized figures, I felt as old and weary as Jeremiah.  I was only 37, yet friends did not recognize the old man I had become. —Michaelangelo commenting on the Sistine Chapel project.

The Sistine Chapel is a papal chapel that is part of the Apostolic Palace in Vatican City.

It is named after Pope Sixtus IV (1471-1484), who commissioned its building in 1477.  Sixtus appointed artists such as Botticelli to paint the story of Moses and the story of Christ on two of the chapel walls (some suggest Botticelli might have even been the supervisor of the ambitious project).  Twenty-four of the portraits of popes in the Sistine Chapel were done by Botticelli.

Sixtus’ nephew, Pope Julius II (1503 – 15134), employed Michelangelo to work on the chapel’s ceiling.  Between 1508 & 1512, when Michelangelo was painting the ceiling of the Sistine chapel, he focused on the theme of salvation through Jesus.  Over the years, the Sistine Chapel was one of several sites used for papal elections.  However, since 1878, it has been the only site.