Blog
Papal Artifacts / News / June 21st: A Commentary on the “Our Father” by the Curator
Jun 21 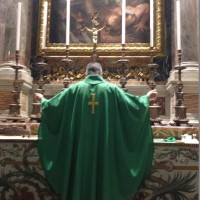 June 21st: A Commentary on the “Our Father” by the Curator

Jesus said to his disciples:
“In praying, do not babble like the pagans,
who think that they will be heard because of their many words.
Do not be like them.
Your Father knows what you need before you ask him.

“This is how you are to pray:

‘Our Father who art in heaven,
hallowed be thy name,
thy Kingdom come,
thy will be done,
on earth as it is in heaven.
Give us this day our daily bread;
and forgive us our trespasses,
as we forgive those who trespass against us;
and lead us not into temptation,
but deliver us from evil.’

Jesus Revealed a New Image of God
A Commentary on the Gospel MT 6:7-15

“God is Father, this I know, for the Bible tells me so.”  This was the title of a paper I did for my Trinity class while in the seminary.  The subject of God being our Father might seem a bit strange to have in an apologetics column, but the sad reality is that there are many people both inside and outside of the Catholic Church who want to do away with the imagery and title of God’s fatherhood.  I will argue that God’s fatherhood is so integral to our faith that no one has a right to change it or to do away with it.

Explicit use of the term “Father” to designate God is rare in the Old Testament.  Compared to the 170 times “Father” is used for God in the Gospels, it may be startling to note that “Father” is used only 11 times in the Hebrew Scriptures.  That’s the issue: For Christians, a whole new relationship with God comes about with the coming of Jesus Christ, the relationship of divine fatherhood.

It was Jesus who revealed to us the reality that God is our Father.  In this revelation, we get a glimpse into his relationship with the Father, in particular when he refers to God as Abba, which means “Daddy.”  Biblical scholar Raymond Brown addresses this in his book “The Death of the Messiah” when he writes, “Most plausibly, addressing God in Aramaic as Abba was an historical and memorable (because unusual) practice of Jesus himself, reflecting Jesus’ consciousness of what he had received from God.”  Brown thus makes the point that because it was such a rare and possibly embarrassing use of the term, it strengthens the argument for use of “father” language.  Jesus was making a point of it.

There are many examples of Christ referring to God as Father.  But a few key instances reveal the importance of this relationship: At the age of 12, when questioned by his parents, he said: “Did you not know that I must be in my Father’s house?” (Luke 2:49).  Jesus’ prayer in the agony of Gethsemane is “Abba, Father… if this is possible let this cup pass from me” (Mark 14:36).  While he was on the cross, he said: “Father, into your hands I commend my spirit: (Luke 23:46).  In the Gospel of John, Jesus repeatedly speaks about the nature of his relationship with the Father: “I and the Father are one” (John 10:30).  He also taught the apostles to pray: “Our Father, who art in heaven.”

The misguided desire to neuter God to an “it” or even as “mother” turns a blind eye to a key element of God’s identity.  God, and God alone, is Father.  The fact that we call biological male parents or even priests father is nothing more than acknowledging that they share in a particular way in the fatherhood of God.  Before being made a cardinal, Walter Kasper was a noted theologian.  In his book Jesus the Christ, he writes: “In all truth, the dignity of father belongs to God alone.  It is not any earthly father but God, from whom all fatherhood is derived.”  God, then, is the pinnacle of fatherhood.  There cannot be a stronger argument in favor of the title’s continued use.  Even for people who have had troubled relationships with a human father, relating to God as Father may be a source of healing.

Jesus’ use of the term Father expresses something divine, mysterious and far beyond our comprehension.  The Nicene Creed puts it well when it says: “the only-begotten Son of God, eternally begotten of the Father, light from light, true God from true God, begotten not made, one in being with the Father.”  When Jesus speaks of God as Father, he is not speaking as a mere man; he is speaking as God.

Jesus does use maternal imagery in referring to God, but he never calls God anything but Father.  It can never be acceptable to simply throw away the language of our ancient tradition, to throw away the words of Christ.

I fear this is the goal of some feminist theologians.  I have gone to eucharistic celebrations only to be greatly offended by the neutering of God.  God has no gender, and the human person is made in the image of God as both male and female.  That’s a separate question.  Our relationship to God is a personal one.  It has been revealed to us that God is our Father.  We must not change God language to fit our own political agendas.  If Jesus teaches us to worship his Father as our Father, then this form of address is not interchangeable.  To do so is an illustration of either being misguided or simply arrogant.  Father Richard Kunst