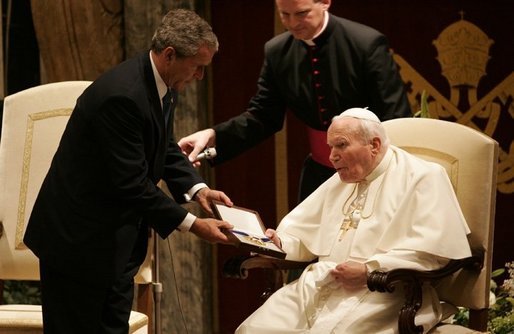 June 2004: Another Presidential Medal of Freedom, with Distinction is Awarded to Pope John Paul II

On 4 June 2004 US President George W. Bush presented the Presidential Medal of Freedom, with Distinction, the United States’ highest civilian honor, to John Paul II during a ceremony at the Apostolic Palace. The president read the citation that accompanied the medal, which recognized “this son of Poland” whose “principled stand for peace and freedom has inspired millions and helped to topple communism and tyranny”. After receiving the award, John Paul II said, “May the desire for freedom, peace, a more humane world symbolized by this medal inspire men and women of goodwill in every time and place.”

Papal Artifacts invites you to visit Papal Artifacts/John Paul II where some of the most treasured items of this Collection are featured.

We honor the memory of St. John Paul receiving this prestigious award from the United States of America. 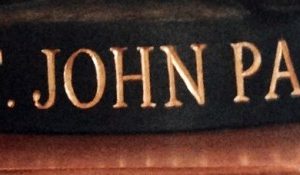