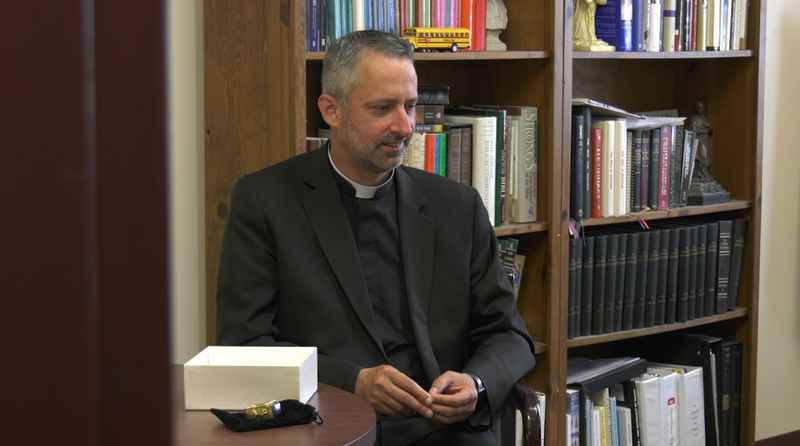 June 11: The Traditional Feast of St. Barnabus, A Commentary from the Curator, Fr. Richard Kunst

The traditional feast of St. Barnabus is superceded by the “movable feast” of the Most Sacred Heart of Jesus, which falls on June 11 this year.

The “marks” of the church are that we are “one, holy, catholic and apostolic.”  We say that in our creed at every weekend Mass.  Apostolic in this context means that as a church we are based on the faith of the apostles in an unbroken line from them to our Holy Father and to the bishops in union with him.

During the month of June we have feast days of some saints who are given the title apostle.  But what comes to your mind when someone says something about the apostles?  I would be willing to bet your first thought is of the Twelve closest disciples of Jesus, the men who accompanied him during his roughly three years of public ministry.  But on Jun 11th, the church celebrates the feast of St. Barnabas who is rightly given the title apostle even though he wasn’t one of the Twelve.  On June 29th, the church celebrates the combined feast of the two greatest apostles, Sts. Peter and Paul, but Paul was not one of the original Twelve.  He was, in fact, persecuting them.  And finally, in the sanctuary of one of my former  parishes, St. John the Evangelist, (who was also an apostle), there is an icon of St. Mary Magdalene holding a banner that says, in Greek, “The Apostle to the Apostles.”  So what gives?  What is an accurate definition of an apostle, and why is it used as a title for various saints when at first glance it seems as though the title belongs most fittingly to the Twelve Apostles?

It may surprise you to hear that the Bible is not consistent in its use of the title, apostle, and the early church is even less consistent.  One example of this is the aforementioned St. Barnabas who is given the title even though he was only an assistant to St. Paul, while two other assistants to him, Timothy and Titus, are never given such a title.  There is a mystery here in the case of Sts. Barnabas, Timothy and Titus.  We don’t know why the title was given to one but not to the others. At this point, it may be good to look at the etymology of the word to glean its actual meaning.

The word, apostle is a Greek word meaning, “one who is sent forth.”  This would have included anyone sent on a foreign mission, not merely as a messenger but as a delegate, a representative of the sender.  For this reason, it is appropriate to use the word apostle in an even broader context, for instance in calling St. Patrick the “Apostle of Ireland.”  Similarly, we refer to St. Mary Magdalene as the “Apostle to the Apostles” because the resurrected Christ sent her to tell the other apostles that he had risen.

The term is used about 80 times in the New Testament.  It is sometimes thought that the title apostle is given to anyone who witnessed the resurrected Christ, but in that case we would have more than 500 apostles. St. Paul writes about this in his First Letter to the Corinthians:  “After that he appeared to more than 500 brothers at once, most of whom are still living, though some have fallen asleep.”  (15:6)

St. Barnabas is an example of the broader definition of apostle, as someone who was sent to proclaim the gospel, just as St. Paul was.  When the resurrected Christ appeared to him on the road to Damascus, he sent him to be the missionary to the gentiles.  So why do most people first think of Christ’s twelve closest disciples when they hear the word apostle?  Who were the Twelve?

We know surprisingly little about this small band of Jesus’ followers.  Some of them are just a name on a list, but about others—for instance Andrew, James and John—we hear more.  It may surprise you to learn that who they are is less important than how many there are: Jesus is the new Israel.  Just as Israel had 12 tribes, so too Jesus had Twelve Apostles.

Even the list of names recorded in three of the Gospels is not consistent.  The Gospels of Matthew and Mark agree with one another, while Luke’s Gospel changes the name of the apostle Judas, the son of James, to Thaddeus.  The Gospel of John does not list them as apostles at all, though seven of them are named.  Two more are simply called, “the sons of Zebedee,” while presumably one of the sons of Zebedee is also called, “the beloved disciple.”  The synoptic Gospels call one apostle Bartholomew, while John’s Gospel refers to him as Nathaniel.

The apostles are important in the development of our faith and our church.  We believe because they preached.  And yet, in a very real way, we are all called to be apostles, because we are all called to represent Christ in our daily lives.  When we leave our parishes after every Mass, we are entering into missionary territory.  We are being sent as apostles. 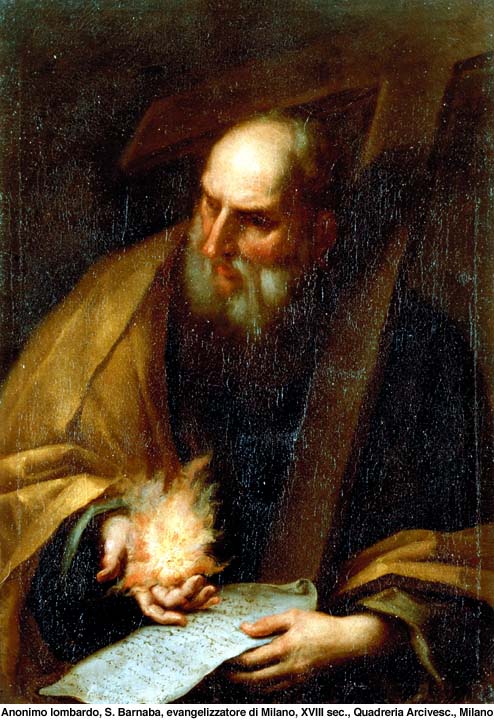 Barnabas, originally named Joseph, was a Levite from Cyprus.  He was not listed among the Original Twelve, but was added by Luke and features prominently in Acts.  The name means, “son of consolation,” and was given to him by the other Apostles, and he emerges as a good-natured man of persuasive powers.

In Acts he is described as disposing of property and donating the proceeds to the Apostles, and then is sent to Antioch to consolidate the Christian community there.  He calls on the support of St. Paul, then travels with him to Jerusalem and supports Paul during the debate wih St. Peter concerning the Gentiles.

His association with Paul continues, and he travels with Paul in his first missionary journey to Cyprus and Asia Minor.

He was eventually martyred by Greco-Roman pagans.