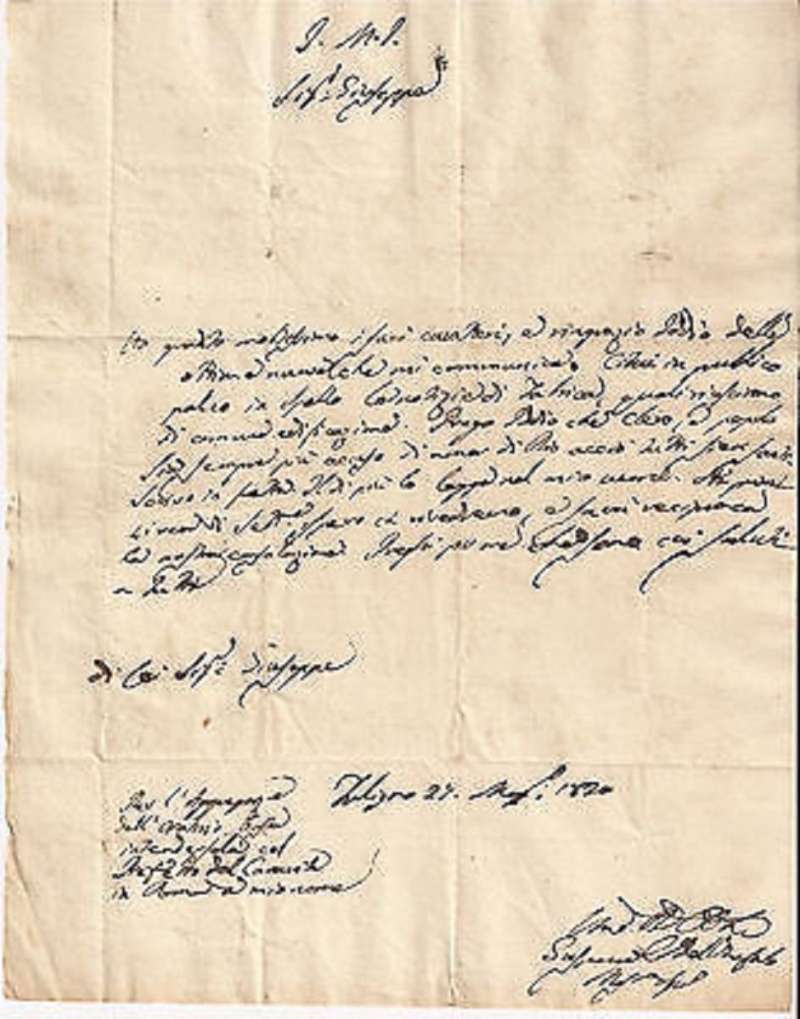 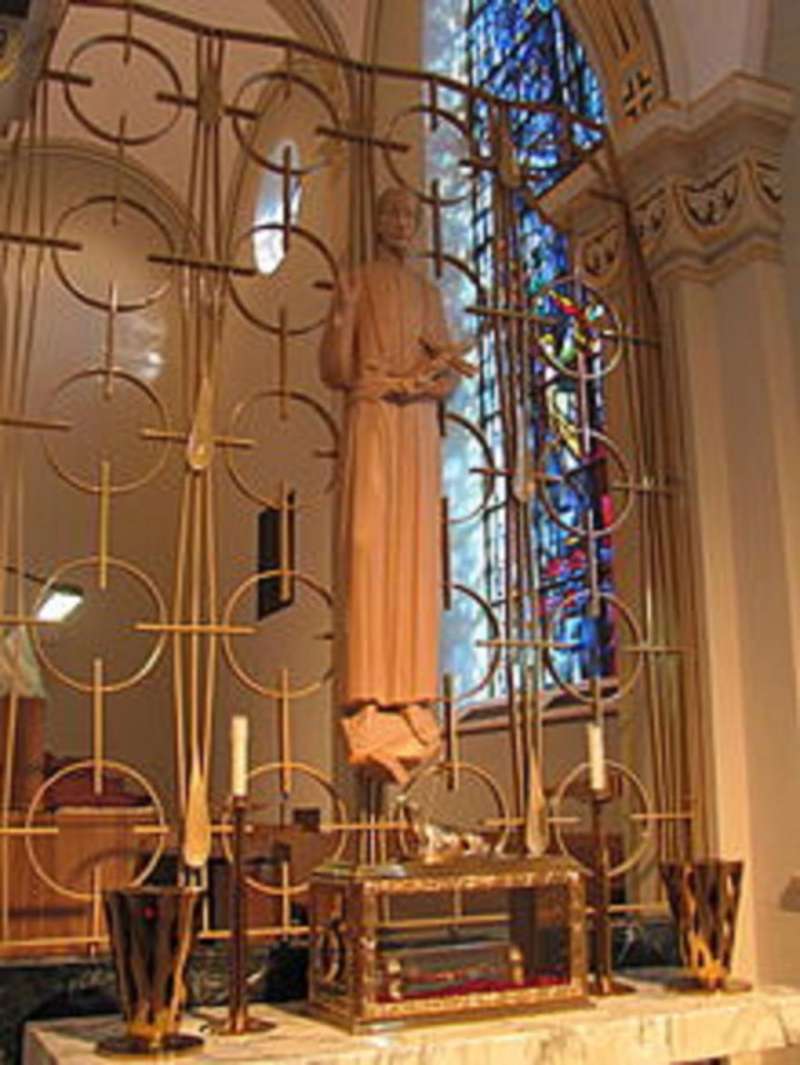 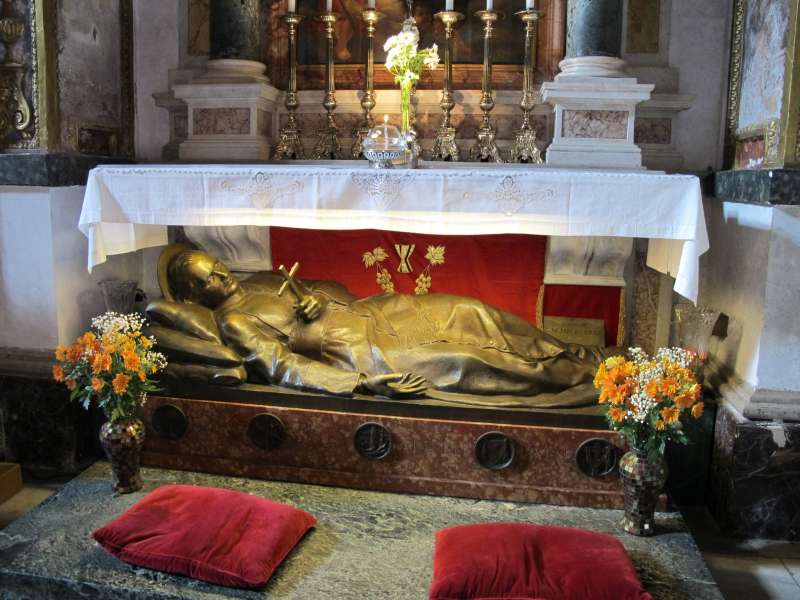 The Birth of St. Gaspare Melchior Balthazar del Bufalo, Founder of the Missionaries of the Most Precious Blood

Saint Gaspare was born in Rome on January 6, 1786 and died there in 1837. He was a priest and founder of the Congregation of the Missionaries of the Most Precious Blood. Pope Pius X beatified him in 1904, and Pope Pius XII canonized him in 1954.

The letters and other artifacts associated with or in any way connected to the Papal Artifacts’ Collection reveal another “arm” of Father Kunst’s items and personal interest.  He is a virtual storehouse of information, not only about the popes, but also about the holy saints and beatified people who have (and continue to ) graced our Church by their love for God and the people in their midst.  We encourage you to take the time to visit Saints & Blesseds–and Notable Individuals to view information about them.

This letter is an excellent addition to the Papal Artifacts Collection of items belonging to or associated with  Saints & Blesseds.

A biography of St. Gaspare is on Papal History/Saints & Blesseds. His burial site in Santa Maria in Trivio, Rome, is also there.

Gaspare was born in Rome on January 6, 1786. His father, Antonio, was a servant in the family of a prince. He was a pious man of firm faith who was a staunch defender of the Holy Father. Gaspare’s mother, Annunziata, was one of those quiet and saintly women who seemed to model her life and faith after the holy women of the Scriptures. She realized early in Gaspare’s life that God had great things in store for him. She raised her son in virtue and holiness, readying the soil for God to plant within Gaspare a deep and abiding devotion to the Blood of Christ.

Early in his life, Gaspare showed a great concern for the poor and sick. Perhaps because he came from a family of meager means, and because he himself had been a sickly child (almost dying at the age of two, only to be cured through the intercession of St. Francis Xavier), Gaspare’s compassion for the poor and outcasts consumed him. He spent his summer vacations as a youth visiting hospitals and bringing meals to the hungry.

When he was eighteen, Gaspare exhibited one of his greatest gifts: organizing for action on behalf of the people on the fringe. Together with some of his classmates, Gaspare ministered to the marginalized by offering religious instruction to the peasants from rural areas who came to Rome to sell their hay, and by providing catechism classes for orphans and children of the poor, and by setting up a night shelter for the homeless.

Gaspare was ordained July 31, 1808. Less than a year later, on May 17, 1809, Napoleon suppressed the papal states. Pope Pius VII was arrested and transported to Savona. On June 13, 1810, Gaspare was brought before the magistrate to take the oath of allegiance to the emperor. In words that echo the Gospel of John when Jesus said, the truth will set you free, Gaspare told the magistrate, I would rather die or suffer evil than to take such an oath. I cannot. I must not. I will not.

For the courage of his conviction, Gaspare was sentenced to prison. But even though his body was incarcerated, the truth had set his spirit free. Although the conditions of the prison caused his health to deteriorate, his mind and heart continued to expand. A dream was about to be born.

During his exile, Gaspare’s compassion deepened. Though he had been about works of mercy for most of his life, in the silence of his cell this work was clearly defined by the Precious Blood of Christ. In the solitude of exile, the vision became clear: to continue the works of mercy and the evangelization in the context of community. He would join forces with other men and women united in the bond of charity to touch others with the redeeming grace of the blood of Jesus.

Napoleon was defeated in January 1814, and Gaspare was free to return to Rome to begin his mission as apostle of the Precious Blood. He had spent four years in exile and imprisonment, but his enthusiasm had not waned. He came back to a city, however, that was in chaos. In the aftermath of Napoleon’s occupation, the Church in Rome was experiencing great trial. So the pope appointed Gaspare to preach missions throughout the city and the surrounding countryside for the spiritual renewal of the people. In response to the Holy Father’s request, Gaspare drew upon the rich resources of two of his mentors, Frs. Albertini and Bonnani, to begin the society of apostolic life.

St. Gaspare brought devotion to the Blood of Christ out of the sanctuary and into the streets. His preaching was rooted in the saving act of Christ on the cross, and so he carried the crucifix close to his heart. Indeed, the mission cross became the symbol of the newly formed community.

Gaspare’s words and witness became the wings to lift the burden of sin from the hearts of his listeners. He called people to reconciliation–to restore a right relationship with God and others. The power of Gaspare’s presence and preaching was found most dramatically in his work with bandits.

At that time there was a Cardinal Cristaldi who was a great admirer of St. Gaspare. He was also the papal treasurer and advisor to Pope Pius VII. He had a plan, which he presented to the pope, to deal with the bandits. His plan was to fight the immorality and savagery of the bandits, not with weapons, because that had been tried and failed, but with spiritual forces. He suggested that St. Gaspare and his new band of missionaries go into the towns and provinces where the bandits lived and establish mission houses. There they were to preach the Word, establish churches and chapels, and see to the continued instruction of the people.

And that is what the young missionary society did. Between 1821 and 1823 six new mission houses were opened. Each house was to have five missionaries and each team was to conduct 12 missions a year. In that way every town would hear the message of redemption and reconciliation during a two year cycle. From these houses St. Gaspare and his companions went out and preached the merits of the Precious Blood. They called the people to repentance and to return to faithfulness. They would preach on the street corners at night. They instructed the children. Armed with only the crucifix, they went into the hills to seek out the bandits to win them over. Crazy—but it worked. In two years the bandit problem was under control.

Gaspare was well loved by those who had encountered his ministry, and he was very popular in his native city. To this day he remains a popular hero in Rome, and devotions to the saint are very popular. However, Gaspare and his young society encountered substantial opposition within the political workings of the Church. One major objection to the new society was that its name, The Society of the Precious Blood, was considered unecclesiastical. Gaspare was accused of disregarding Canon Law and the mission cross and chain that the members wore was completely untraditional. This opposition began under the reign of Pope Pius VII (around 1820) who had been a strong supporter of the society at its founding in 1815.

This opposition became so strong that the successor to Pius VII, Leo XII, was positively adverse to the community. It is noted that this was at a time when Gaspare was being more and more open in his criticism of abuses in the Church and the government of the Papal States. St. Gaspare felt that this opposition was more of a personal attack on himself and so he offered to step down as moderator of the community so that things could be smoothed over. Fortunately, this was not needed as the situation with Leo XII was resolved after a meeting between the two of them.

This was not the end of Gaspare’s difficulties. The enemies of Gaspare merely changed their tactics to trying to have him removed from Rome. First they tried to have him made a bishop. This Gaspare begged to be excused from. Then they tried to have him removed from Rome by having him named Inter Nuntius to Brazil. It was a very difficult time for Gaspare until his refusal was accepted. Finally Leo XII appointed Gaspare to the Congregation for the Propagation of the Faith, which required his residence in Rome.

After Leo XII died in 1828 the enemies of the community went to work on his successor, Pius VIII. Pius VIII believed all the old accusations and treated Gaspare very severely in a private audience. He removed all the privileges for the community from him, including all the financial help that had been assigned for mission work. It is a testament to Gaspare’s conviction that the community was inspired by divine will, that this was not the end of the community. Instead, Gaspare withdrew to one of the houses and drew up a document giving legal proof of the legitimate existence granted to the community by Pius VII. The opposition continued throughout the life of Gaspare and the Rule was not approved until after his death.

Gaspare died on December 28, 1837. The medical report called him a “victim of charity” because even though he was in ill health himself, he ministered to the victims of the cholera epidemic that broke out in Rome. Gaspare was beatified in 1904 and canonized a saint on June 12, 1954.