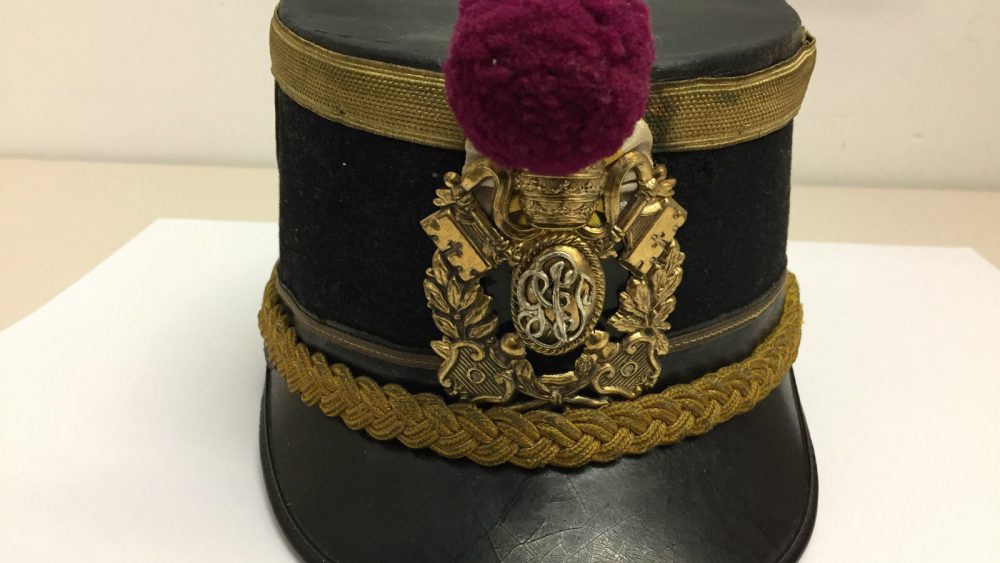 Pope Francis to Vatican Police: I Admire Your Spirit of Sacrifice 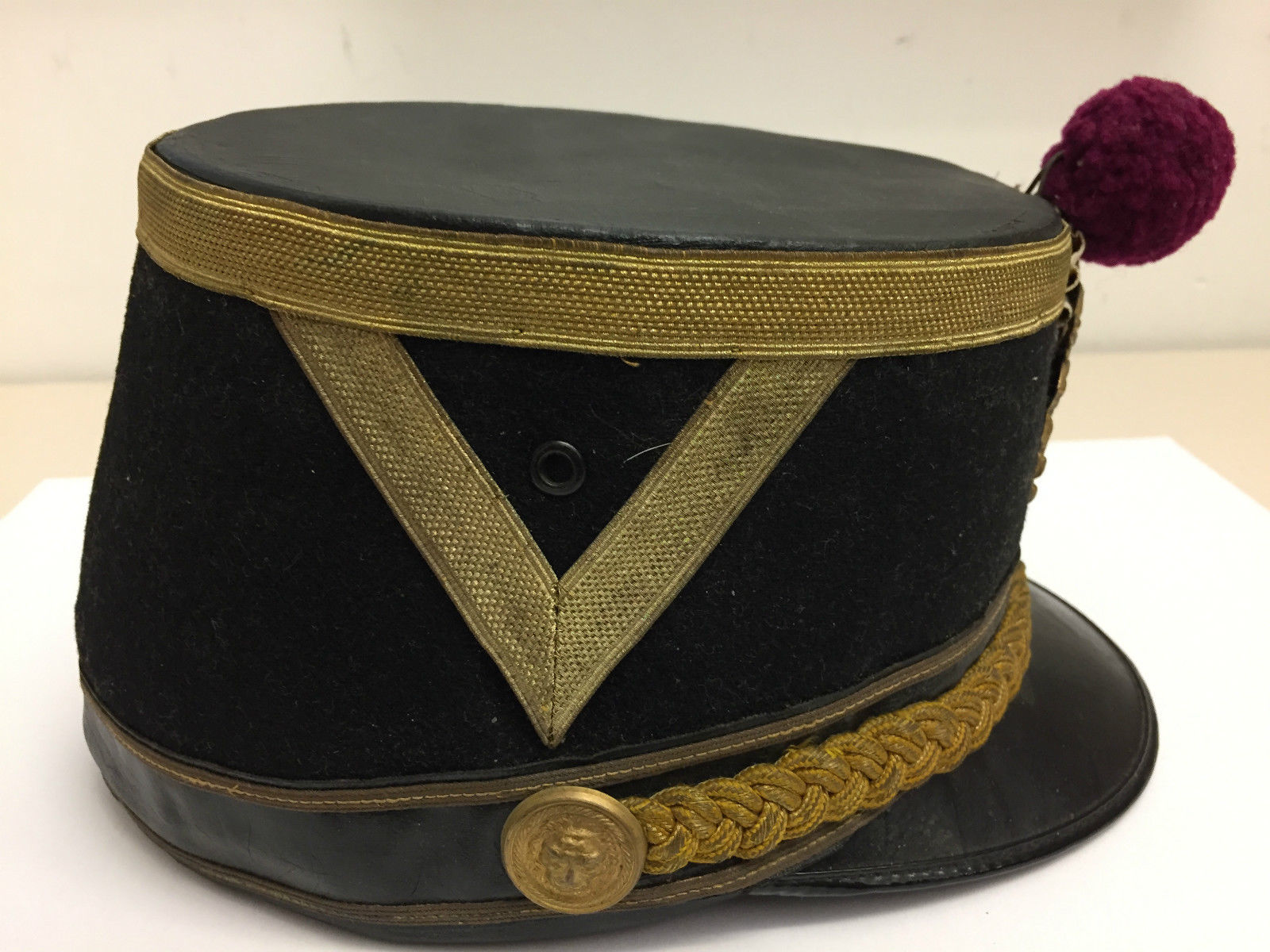 The item from the Papal Artifacts’ Collection is a police kepi with the insignia of the papacy–the cross keys & tiara–in gold.  It dates from the papacy of Benedict XV who reigned from 1914- 1922.

The kepi is in excellent condition and is another item in the Collection that helps to visualize the civil authority of the papacy within the 109 acres of Vatican City State and other Vatican owned sites. 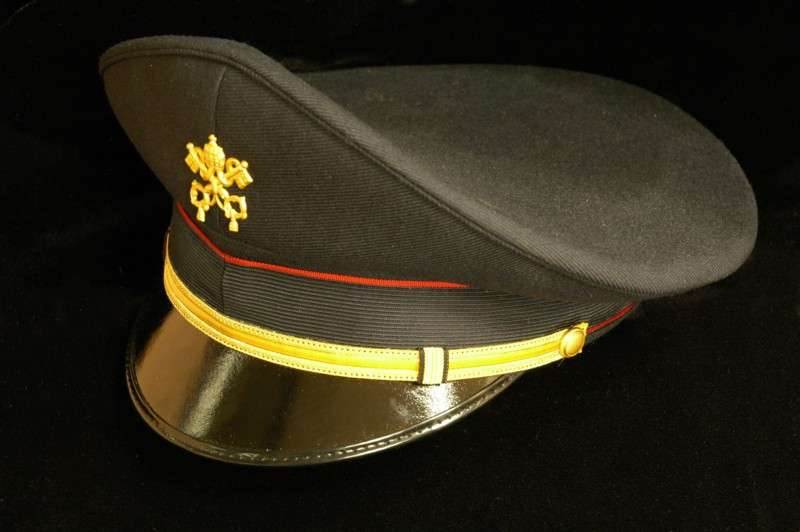 A police hat from the 1970s Vatican police in the Papal Artifacts’ Collection.

On the front of the hat it has the cross-keys and tiara of the papacy. 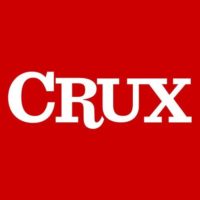 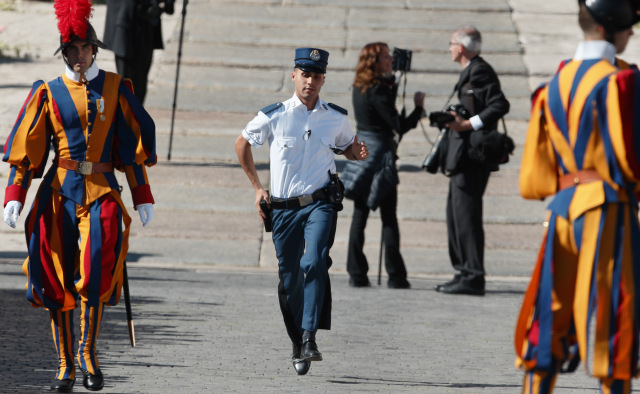 A Vatican police officer runs to his position as Pope Francis greets the crowd after a canonization Mass in St. Peter's Square at the Vatican Oct. 15. The Vatican police force was established 200 years ago, but its origins were in the fourth century. (CNS photo/Paul Haring) See VATICAN-LETTER-GENDARMES Oct. 26, 2017.

Throughout its history, the Vatican police force has worked to ensure the safety of the Roman pontiff. Given the millions of people who gather in St. Peter’s Square or ROME – Like police everywhere, Vatican officers write dozens of parking tickets and deal with more than their fair share of petty thieves.

The Vatican’s blue-uniformed police corps does not have the picturesque uniforms or the medieval halberds of the Swiss Guard, with whom they work to protect the pope and Vatican City State, but they have a 1,700-year history that is just as colorful.

The history – spanning times of peace, war, and even excommunication – is recounted in a new book titled, The Vatican Gendarmerie: From its Origins to our Days.

The book, released Oct. 19, draws from ancient records, archival documents and candid photos to chronicle the history of the force, which traces its origins back to the 4th century. After the Diocletian persecution of Christians, the Emperor Constantine granted them religious freedom and allowed Pope Miltiades to have an armed military escort.

From the late 1300s to the 1600s, the Gendarmes Corps – as it was known – enrolled young men from Corsica, because men there were considered to be particularly “proud and courageous,” the book said.

But the face of the Vatican military force changed following Napoleon Bonaparte’s invasion of Italy in the late 1700s. According to the volume, a majority of the members of the Gendarmes Corps left to serve in the French army, a move that led to their excommunication by Pope Pius VII.

In 1816, after Napoleon’s defeat, Pope Pius issued an apostolic letter that brought significant reform to the administration of the papal state, including a new force called the Pontifical Gendarmes, now known as the Vatican Gendarmes.

Two hundred years later, the “Activity of the Holy See,” an annual book of reports from various Vatican offices, offers a glimpse into the actions, investigative work and arrests that occur within Vatican City State.

In 2015, for example, Vatican police carried out eight arrests. They also launched a pickpocketing-prevention program in the Vatican Museums and St. Peter’s Basilica and conducted investigations into 58 reports of theft. Of those thefts, 19 cases were handed on to the Vatican City court.

Throughout its history, the Vatican police force also has worked to ensure the safety of the Roman pontiff. Given the millions of people who gather in St. Peter’s Square or St. Peter’s Basilica for papal events every year that is no small task.

Protecting the pope while allowing him access to pilgrims proved most challenging during a general audience May 13, 1981. St. John Paul II was riding in his popemobile greeting pilgrims gathered in St. Peter’s Square when Turkish gunmen Mehmet Ali Agca fired four shots, severely injuring the pope.

In the ensuing chaos, Camillo Cibin, then head of the Vatican police, tackled Agca as he was attempting to dispose of the gun and flee. Cibin prevented another assassination attempt on John Paul one year later when a former priest tried to stab the pontiff during his pilgrimage to Fatima.

Cibin, who served in the Vatican police force for nearly 60 years and was a bodyguard to six popes, was dubbed by the Italian media as the “guardian angel of the popes,” a title that remained with him until his retirement in 2006 and his death three years later.

Coincidentally, the nickname calls to mind the patron saint of the Vatican police, St. Michael the Archangel, a saint Pope Francis has encouraged today’s Vatican police to emulate.

Like the archangel, a good guardian “has the courage to get rid of demons” and has the intelligence to be able to pick them out from the crowd. “He can’t be, excuse my terminology, an idiot; he has to be quick on the uptake and alert,” the pope said in his homily at a Mass for security personnel Sept. 27, 2014.

While Vatican police are no strangers to occasional bomb threats – including six suspicious bags intercepted in 2015 – Francis warned them of one major bomb that they must always be on the lookout for.

“The worst bomb inside the Vatican is gossip,” which “threatens the life of the church and the life of (the Vatican) every day,” the pope said, because it “sows destruction” and “destroys the lives of others.”

In his preface to the book detailing the history of the Vatican Gendarmes, Giani recalled the pope’s 2014 homily and confirmed that the officers’ vocation remains what it was centuries ago: To safeguard the state so the church and the pope “can be free” to carry out their mission.

“Faithfulness to the pope, in and with the church, ‘Fides et Virtus’ (‘Faith and Virtue’) – our motto – and following the plans of divine providence: this is the wish and hope for today’s gendarmes and those of tomorrow, with our thoughts always looking back to those who preceded us,” Giani wrote.

Throughout its history, the Vatican police force has worked to ensure the safety of the Roman pontiff. Given the millions of people who gather in St. Peter’s Square or St. Peter’s Basilica for papal events every yea