Father Richard Kunst on the Relevance of Fatima Today

All over the world the Catholic church is joining Pope Francis in his consecration to the Immaculate Heart of Mary of Ukraine & Russia.

Check your local diocese to see how you can participate in this prayer for an end to the bloodshed occurring there.

Immaculate Heart of Mary, intercede for the world. 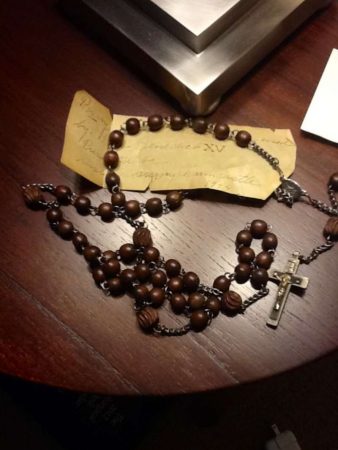 When I was growing up, my paternal grandmother was the spiritual leader of the extended Kunst family. She had a massive influence over all of us, but especially me. My love and respect for her was almost boundless, because I saw in her what I thought to be a true saint.

My grand-mother was an active member of what was known as “The Blue Army,” a national group that was dedicated to the spreading of the message of Our Lady of Fatima. I remember many times going with her to various Blue Army gatherings and events. Needless to say, my personal childhood spirituality was heavily tilted towards all things Fatima.

That has never left me. I still have a deep devotion to Mary under this title, as well as to the important message that was revealed by Our Lady at that time.

As we all know by now, 2017 marked the centenary of the Fatima event in which the Blessed Virgin appeared to three illiterate shepherd children six times, once a month from May to October. In honor of the 100th anniversary, Pope Francis canonized the two younger children. (I was blessed to have concelebrated at their beatification by St. John Paul II in 2000 in Fatima.) The third seer died just in 2005, so her process of canonization is only in the beginning stages.

The apparitions of Mary were foreshadowed by an appearance of an angel in 1916, which the children were able to keep secret, but that all changed when Our Lady first appeared to the three children on May 13, 1917. In classic biblical fashion, her first words to the children were, “Do not be afraid, I will do you no harm.”

St. Jacinta Marto, the youngest of the seers, is the one who spilled the beans to her parents, making the Fatima event a public one from the very beginning, causing much strife for the children, whose families did not believe the children, and causing ever-growing crowds to join the children at each of the successive appearances.

It was her appearance in July in which Our Lady told the children to add the now famous “Fatima prayer” to the rosary after each mystery: “O my Jesus, forgive us, save us from the fires of hell. Lead all souls to heaven, especially those who are most in need.” In all six apparitions, the primary message, which was repeated by Our Lady, was, “Pray the rosary every day, in order to obtain peace for the world and the end of the war.”

This message to pray the rosary daily is not something that is relegated to the past. Our Lady wanted that message to be spread for the end of World War I, but it is as pertinent today as it was 100 years ago. World peace is as elusive as ever, with the problems in Ukraine, Syria and North Korea, not to mention terrorism. I suspect if Mary were to appear again, she would ask us to continue to pray the rosary daily for the same cause. Personally, after the Mass it remains my favorite prayer.

The six months of apparitions that occurred in 1917 had a bit of a detour in August when the three children were arrested and interrogated. The local communist government figured the apparitions were a part of a hoax to discredit their authority. The children were actually thrown in an adult jail and threatened with death if they did not recant, which of course they did not. Instead of the regular appearance on the 13th of that month, Our Lady appeared to them on the 19th.

The Fatima event is likely most well-known for what happened on October 13, Our Lady’s final appearance, in what is known as “the miracle of the sun.” By the time October rolled around, the word had spread far and wide that some sort of sign would happen to authenticate the apparitions. The crowds had been growing with each successive month, so on the miserably rainy day of Oct. 13, some estimates had the crowd as large as 100,000, including much of the secular media there to cover the event that was supposedly was going to happen.

Photos from that day verify the people’s response to the unique phenomena of the pulsating or dancing of the sun. Not all witnesses explained it the same, but the majority of the people explained it as the sun gyrating or falling to the earth in various different colors. The rain which had been falling all day stopped, and the drenched ground and people were completely dried up in just a few minutes of the sun’s movement. People from many miles away also witnessed the occurrence, which to this day has no satisfactory scientific explanation. What is telling is that the communist newspaper described the whole indescribable event.

Fatima is as pertinent today as it was 100 years ago, especially with the call to pray the rosary daily. My first international trip as a college student was to go on pilgrimage to Fatima, and I have been back a few times since. From my own observation, of all the shrines I have ever visited, the shrine at Fatima, Portugal, has felt the most spiritual to me, primarily, I suspect, due to the deep faith of the Portuguese and other pilgrims from throughout the world who go to visit and express their love for Our Blessed Mother. 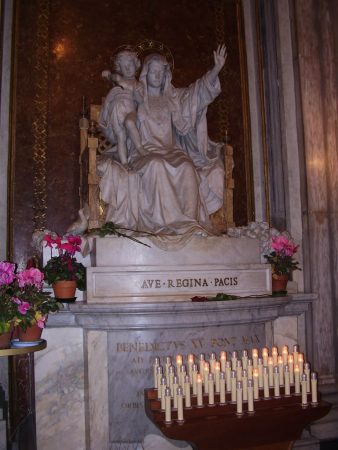 Our Lady, Queen of Peace
Commissioned by Pope Benedict XV at Close of WW I in St. Mary Major Basilica