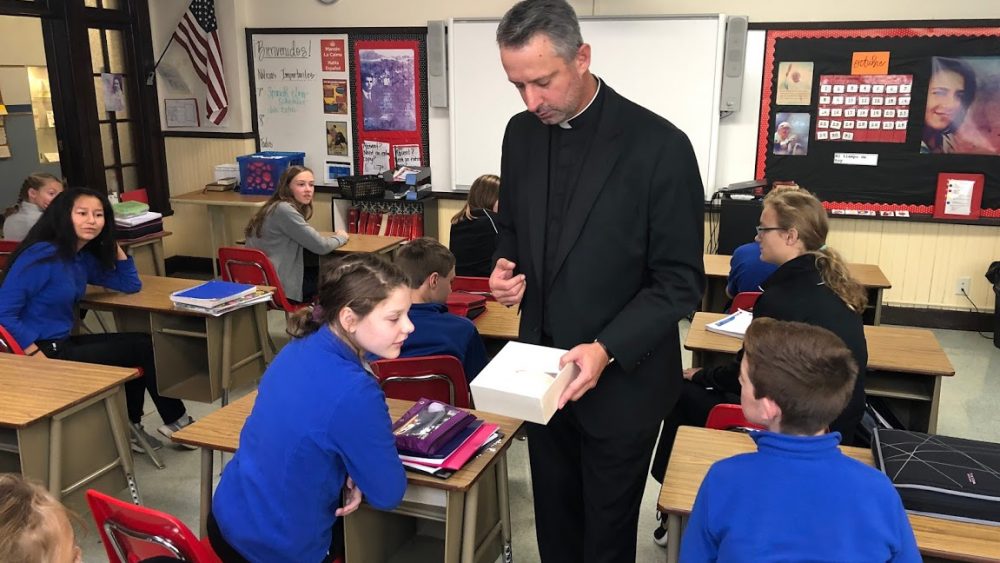 Father Richard Kunst: A Reflection on the Importance of Catholic Schools

The history of the Catholic Church is indeed an interesting subject, and the more I learn, the more fascinated I am with how God has worked both with and despite human beings.  Although I find myself more interested in the Church’s earlier centuries, from the Roman persecutions to the Italian Renaissance, our modern history is also of great interest.  One such area is the development of the Catholic Church in the United States.

The Catholic Church has been a part of American history since the second voyage of Christopher Columbus (himself a Catholic) on which he brought Spanish missionaries in 1493.  The first bishop in the United States was a Jesuit, John Carroll, in 1789, but he wasn’t named a bishop until after Pope Pius VI consulted with Benjamin Franklin as to who would make a good shepherd for the new country.

But the growth of the church in our country was not because of priests and bishops; it was because of nuns.  And the nuns didn’t build churches, they built schools.  When the school was firmly established, a church would be built alongside of it.  In other words, the growth of the Catholic Church in America was primarily because of Catholic schools.

That’s impressive.  And what is equally impressive is the quality of Catholic education in our primary schools today.  Class sizes are small, so kids get much more one-on-one time with the teacher while still benefiting from social interaction with other kids their age.  Standardized tests show Catholic school kids scoring two to three grades higher than their public school counterparts.  The kids are taught to be decent, moral, and upstanding citizens who will contribute to their community.

Good parents want their children to go to heaven.  In fact I suspect if a parent really thought about it they would have to agree that the most important thing to them would be their child’s soul.  There is no better place than a Catholic school to help guide that precious child to be a good disciple of Jesus Christ and to live accordingly.  Public schools can’t do that.  Public schools can get a child ready for this life; Catholic schools get a child ready for both this life and the next life.  How can you compete with that?

When it comes down to brass tacks there is a really big difference between Catholic and public schools.  Every school has rules, and since we are about to start a new school year, the children will be hearing a lot about them: no running in the halls, no gum chewing or name calling, no stealing or bullying.  If a public school student were to ask why bullying is wrong, his teacher could not give the final answer.  He or she could say, “Well, because it’s against the rules,” or, “because we need to respect other people.”  The student might counter by asking why we have to respect other people.  The real answer to that question is because God created us in His own image, and there is a dignity to the human person who was redeemed by Jesus Christ, and he is the one who taught us how we are to treat others based on the Gospel.  That is the real and final answer, an answer that can never be addressed in a public school.

Some people might think that their parish’s religious education programs suffice for their children’s Catholic formation.  I certainly cannot speak for all Catholic churches’ religious education programs, but I can speak about the ones in which I have been involved.  Suffice it to say that one or two hours a week do not come close to what is happening in our Catholic schools.  Christ and his teachings permeate all aspects of the life of a student in our Catholic educational system.  What can be better for the soul of a child than to be exposed to Christ throughout the day?

Apologetics is a form of teaching in which we justify why we believe what we believe.  The justification for Catholic education is so abundantly clear, and yet the percent of Catholics who send their children to Catholic schools has plummeted over the decades.  Nothing is more important than the soul of your child—not sports, not friends, nothing.

As we begin another school year, we invite you to give your local Catholic school a call.  They all accept new students even after the school year has begun.

And it’s obvious this part of my work is some of my favorite work!