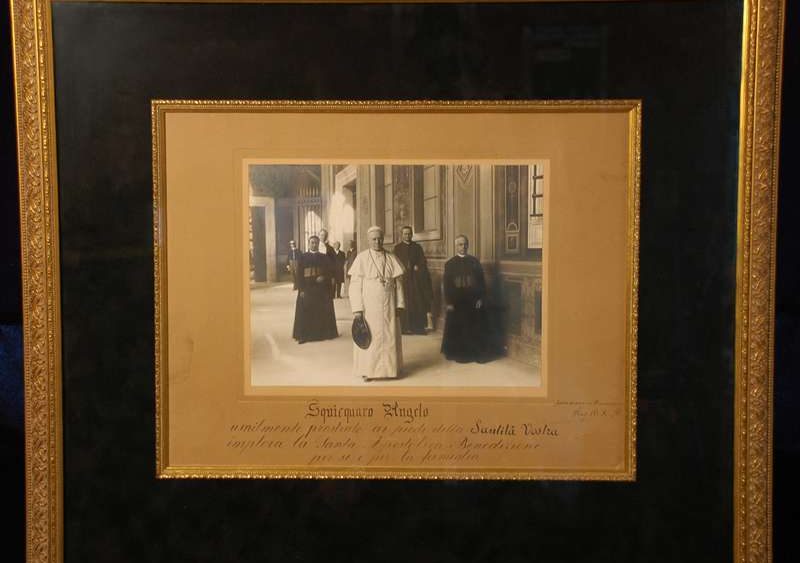 The featured item is an autographed photo of St. Pius X. It is in a large ornate frame and has an image of him walking in a hallway along with various staff members in the Vatican.

From the start, his pontificate had its challenges. He was the first Pope after the fall of the Papal States and he saw the threat of World War I become a reality.

He also had to deal with more practical matters of governance, like the reform of the Roman Curia.

“Reforming the Roman Curia is something he has in common with Pope Francis. When Pius X was elected, the Roman Curia was running under the rules that had been established in 1588 by Pope Sixtus V.”

Back then a Pope wasn’t elected based solely on the Cardinals vote. Outsiders, like royalty and the influential laity also had a say.

“Pope Pius X was elected, but really Cardinal Rampolla received the most votes. He didn’t end up being Pope, because the Archbishop of Krakow used the veto vote of Austria’s Emperor. That was the last time a secular power intervened in a conclave. The year after his election, Pius X abolished that rule under the threat of excommunication. From then on, only cardinals could vote.”

The Pope also changed the order in which the Sacraments are received. Pius X decided that Communion should be received before one goes to Confirmation. It’s something that still stands to this day.

In his 11 year pontificate, he carried out key reforms in the Church. In the last months of his life, he witnessed the violence and destruction of World War I.

“Everyone thought they would win the war. So soldiers thought they would soon be back at home with their families. In a way, you could say the Pope died of grief between the night of the 20th and the 21st of August back in 1914, just three weeks after World War I started. He knew there would be slaughter.”