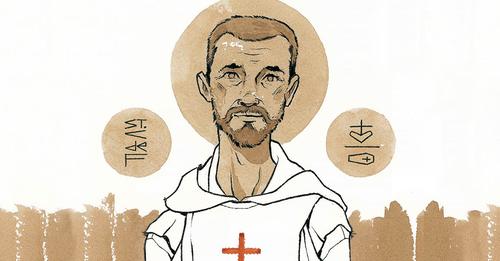 Declared a saint by Pope Francis in May 2022, Charles de Foucauld (1858–1916) was the scion of a long line of wealthy French noblemen. After the early death of his parents, he followed in the footsteps of his forebears, as expected of him, and embarked on a military career. Influenced by a milieu that held a dim view of religious belief, he also spent lavishly, burning through his inheritance and becoming notorious for his dissolute lifestyle. Pleasure-seeking did not satisfy him, however, and he was dogged by an inner emptiness. A tour of military duty and a subsequent geographical research expedition in the Algerian Sahara (at that time a part of France’s colonial empire) turned him – to the astonishment of his peers – from party animal to desert fox. Back in Paris, he was welcomed as a dashing adventurer; inwardly, he was churning. What had happened?

For one thing, he had witnessed Muslims praying in Morocco – a sight that deeply impressed him and now drew him to the church. Fortunately, the clear-sighted priest to whom de Foucauld turned recognized that the young man in front of him was not facing an intellectual dilemma but an existential decision. In the course of ongoing conversations, the priest invited de Foucauld to confess his sins and put his life into God’s hands.

De Foucauld was deeply moved by this experience and later spoke of it as a vital turning point in his life. In line with his tendency to commit himself to something completely or not at all, he sought entry to a Trappist monastery in Syria – a poor community in a famously strict order. As he explained the decision to Henri Duveyrier, the well-known explorer with whom he had traveled North Africa: “Why did I join the Trappists? Out of love – pure love. I love our Lord and cannot bear to live any other life than his. I cannot travel first-class while the one I love went through it in the last.”

A few years later, after witnessing the massacre of local Syrian Christians on the orders of the Turkish sultan (he and his fellow French monks were left unharmed), de Foucauld found himself longing for a different way to follow Christ. If God, in his love for humankind, had taken on the form of a man and chosen the downward path of poverty, shouldn’t he – in solidarity with that man, Jesus – stand with the poor and powerless too?

In 1897, leaving the security of the monastery, he moved to Nazareth, in Palestine. Here, in this unassuming village, he sought to come nearer to an understanding of the Incarnation – the mystery of a God who had chosen to live as a simple craftsman among ordinary people as they went about their daily lives.

Pleased to be so close to his beloved Lord, both geographically and inwardly, de Foucauld found work as a house servant at a convent of the Poor Clares. Meanwhile, he spent long hours contemplating the Gospels and meditating on Christ’s presence in the Eucharist. This form of devotion had always deeply moved him. To think that God would make himself so small as to offer himself up as a humble piece of bread!

Eventually, he came to the realization that he could live in the manner of the Man of Nazareth anywhere – and that he must do so where he could be of greatest service to others. Not surprisingly, in accordance with his “logic” of the Incarnation, he was drawn to the poorest of the poor. He longed to be a brother to them – to assure those whom the world despised that God had not forgotten them, and to share their fate.

In 1901, de Foucauld returned to the Sahara and the Tuareg, a tribe that lived on the margins of the world known to Europeans at that time, with virtually no knowledge of Western civilization or Christianity. He would spend the next fifteen years with them, accepting their bare-bones standard of living and offering hospitality and care to the poor and sick. He also immersed himself in their culture, learning their language and studying their traditions.

De Foucauld often dreamed of calling other brothers to join him in his work – he envisioned founding a community modeled on the one that sprang up around Jesus and his disciples. But this dream was not to be realized, at least not during his lifetime. For one thing, his clerical superiors, unsettled by his tendency to “absolutize” ideals such as self-denial and the renunciation of family ties, dissuaded him from recruiting followers. For another, the handful who joined him anyway soon discovered that his ascetic lifestyle was all but inimitable. As the old saying goes, “A saint is a wonderful person, as long as you don’t have to live with him.”

On December 1, 1916, against the backdrop of regional unrest generated by World War I, de Foucauld was kidnapped and shot by bandits. And yet his legacy lives on. De Foucauld’s memory was kept alive by a Catholic association he had helped to organize, and popularized by a bestselling 1921 biography. Communities formed that sought to promote his theological insights and put them into practice. While the first of these groups arose in his native France, others have emerged elsewhere in the intervening century, among them the Little Sisters and Little Brothers, also known as the Communities of Charles de Foucauld. Inspired by his life, and what he called the “spirit of Nazareth,” they choose to live in voluntary poverty among the poor, and to serve the “hidden Christ” as he is found on the margins of society – in prisons, depressed urban areas, refugee centers, and other places of despair.