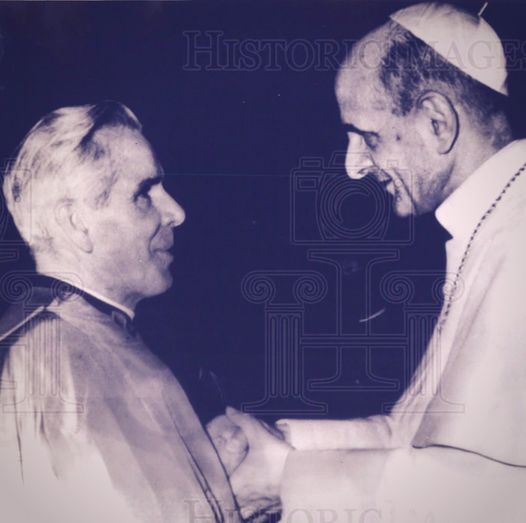 Archbishop Fulton Sheen, in his autobiography “Treasure in Clay”, wrote about his audiences with Pope St. Paul VI:

“As many others had done, Pope Paul VI brought up the subject of suffering in the course of one audience. Quoting St. Paul’s letter to the Colossians that “we fill up the quota that is wanting to the sufferings of Christ for the sake of His Body, the Church,” he reflected that the Kingdom of Heave is won only by some tribulation.

He took a blank sheet of paper and wrote on it: nolo sine cruce crucifixum (I do not wish to be crucified without a cross). He threw it in the wastebasket. I asked His Holiness if I might retrieve it from the wastebasket and keep it. I have it framed, and it is preserved above my bed so I may remember that audience.

Another year, I observed that he was well named “Paul” because he had been crucified with Christ. “Yes,” he observed, “every night about midnight I open my mail of the day. Almost every letter has a thorn in it. When I put my head on my pillow at night, I really lay it on a crown of thorns.”

Then he continued: “But I cannot tell you what an ineffable joy it is to suffer all this for the sake of the Church. The other day I had some visitors from Yugoslavia. One of them was a priest who had been under torture for twenty years. He was so overcome with awe at being free and having an audience that he did not say a word; but I could see in his face the heavenly joy at standing before the Vicar of Christ whom he would not deny even under extreme torture.”