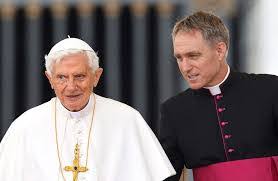 A Rome Report on Pope Benedict XVI & A Correction by the Curator!

“No other Pope in the history of the Church has ever lived to be 93 years of age.” Archbishop Georg Ganswein

According to our Curator, Pope Leo XIII lived to be 93 years old–as did the possibility of Pope Agatho who reigned for about 2 years in the 600s, but there are not good records to confirm this.

It’s been eight years since Benedict XVI announced his resignation. His secretary, who is also Prefect of the Papal Household, told Rome Reports that the Pope emeritus’ mind remains as sharp as ever

ARCHBISHOP GEORG GÄNSWEIN
Prefect Papal Household
“It’s true that he is physically very frail, and his voice is becoming weaker. But the power of his eyes, the strength and intensity of his intellect and his mind is incredible! The faculties that are diminishing have made others grow stronger. At least that’s my impression.”

No other Pope in the history of the Church has ever lived to be 93 years of age.

ARCHBISHOP GEORG GÄNSWEIN
Prefect Papal Household
“We should keep that in mind. He tells me: ‘I’m nearly 94 years old, what do you want from me?’ He didn’t expect to live to this age. He’s even told me he didn’t imagine it would take so long to travel the distance from the end of his pontificate to meet Saint Peter at the Gate (of Heaven).”

Even so, the Pope emeritus lives each day as it comes inside the Mater Ecclesiae Monastery within the walls of the Vatican.

ARCHBISHOP GEORG GÄNSWEIN
Prefect, Papal Household
“He always dines with us, and eats what we eat, only much less. I say: ‘Holy Father, you eat like a church mouse, much too little.’ And he replies: “Yes, I don’t have an appetite. I eat, but I’m not hungry.” He gets up in the morning and comes to Mass. He concelebrates because he can’t stand anymore. But he joins me at the altar in his wheelchair and we concelebrate together.”

Archbishop Gänswein recently published a commentary on the Stations of the Cross: a tradition the Pope emeritus has written about himself.

Archbishop Gänswein’s book about Jesus’ final moments is currently available in German and Italian. But English and Spanish editions will be coming soon.