Blog
Papal Artifacts / Uncategorized / A Letter from the Newly Elected John Paul II to Cardinal Stefan Wyszinski: 1978, With Thanks to The Popecast
Sep 27 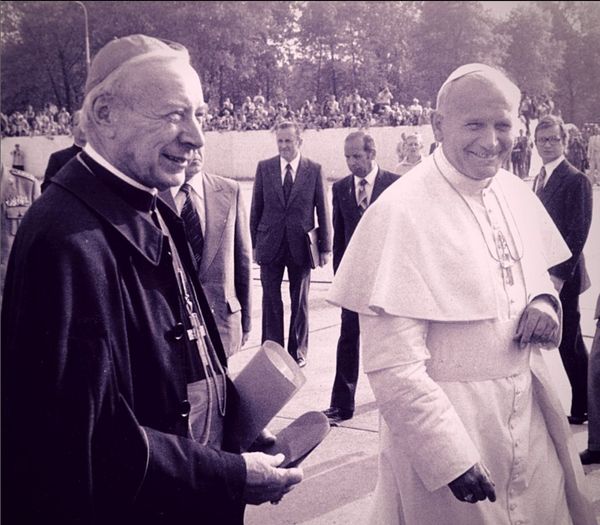 A Letter from the Newly Elected John Paul II to Cardinal Stefan Wyszinski: 1978, With Thanks to The Popecast

Pope St. John Paul II is pictured here with his beloved mentor, Blessed Cardinal Stefan Wyszyński, soon after his election as pope. In a letter dated 44 years ago next month, John Paul II wrote this to Wyszinski and the entire Polish nation:

“Venerable and beloved Cardinal Primate, allow me to tell you just what I think. This Polish pope, who today, full of fear of God, but also of trust, is beginning a new pontificate, would not be on Peter’s chair were it not for your faith which did not retreat before prison and suffering.

Were it not for your heroic hope, your unlimited trust in the Mother of the Church! Were it not for Jasna Gora, and the whole period of the history of the Church in our country, together with your ministry as Bishop and Primate! Saying this to you, I say it also to all my brothers in the episcopate: to all of them together and to each of them.

To all priests and religious men and women and to each individually. So also to one and all of my beloved fellow-countrymen, brothers and sisters in our country and outside it. I say it also to you, dear Cardinal of Philadelphia in the United States, and to all bishops of Polish origin all over the world.

I say it to all my fellow-countrymen without exception, respecting their creed and their convictions. Love of our country unites us and must unite us above all divergences. It has nothing in common with a narrow nationalism or chauvinism, but springs from the law of the human heart. It is a measure of man’s nobility: a measure that has been put to the test many times during our difficult history.”