Blog
Papal Artifacts / News / June 15, 1804: A Fascinating Story about Obtaining a License from the Vatican to Carry a Weapon
Jun 15 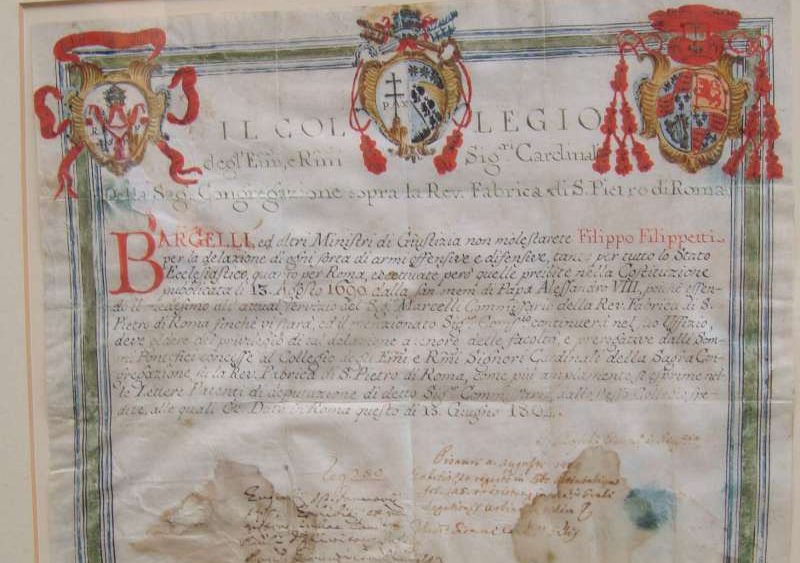 June 15, 1804: A Fascinating Story about Obtaining a License from the Vatican to Carry a Weapon 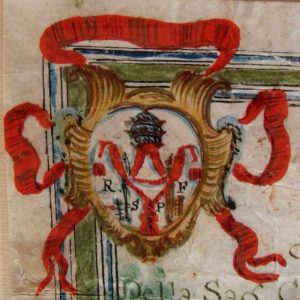 License Issued to Carry a Weapon During Pontificate of Pius VII, Coat of Arms 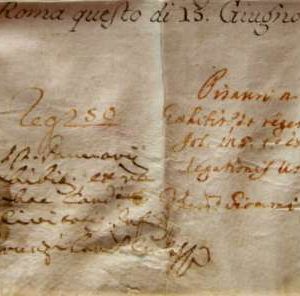 License Issued to Carry a Weapon During Pontificate of Pius VII, Close up of Signature 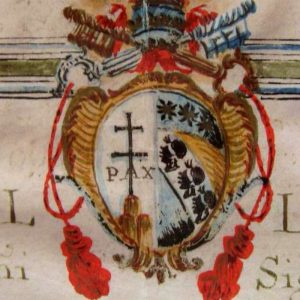 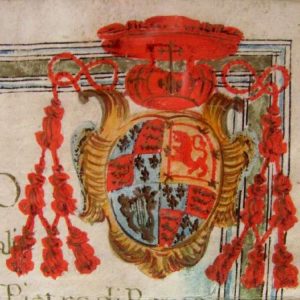 License Issued to Carry a Weapon During Pontificate of Pius VII, Cardinal Coat of Arms

The document is an original parchment from 1804, issued from the office in the Vatican known as the Fabbrica San Pietro, with the permission of Cardinal Enrico Benedetto Stuart, Prefect of the Office, for Pope Pius VII. The document was issued to Filippo Filippetti on June 15, 1804, and is a license to carry/bear arms.

The privilege was granted by the Sacred Congregation of Cardinals of the Reverenda Fabbricca di San Pietro. It contains three coats of arms. In the center is Pope Pius VII’s, and on the left is the coat of arms of the Fabbrica San Pietro; on the right is Cardinal Stuart’s as the Office’s Prefect.

About the Fabbrica San Pietro and Cardinal Enrico B. Stuart

In 1523 Pope Clement VII appointed a permanent committee of 60 experts and charged them with responsibility for building and administering the basilica. They were to report directly to the Holy See. In 1589 Pope Sixtus V placed this committee under the authority of the Cardinal Archpriest of St Peter’s Basilica, and some years later, during the pontificate of Clement VIII (1592-1605), the committee became an independent administration called the “Congregazione della Reverenda Fabbrica di San Pietro”. The Prefect of this Congregation, which was composed of cardinals and prelates, was the basilica’s Cardinal Archpriest. The Congregation was permitted to nominate annually its own representatives, known as commissioners of the Reverenda Fabbrica, throughout the provinces of the Papal States. The commissioners had their own jurisdiction and were authorized to judge every kind of petition; however, their decrees could be appealed to the Congregation.

In 1863, during the pontificate of Pius IX, the Congregation was no longer allowed to resolve legal disputes, which were transferred to the Congregation of the Council.
After Pius X’s reform in 1908, the Congregation dealt exclusively with managing the Fabbrica and, after Pope Paul VI reformed the Roman Curia in 1967, it was abolished, becoming one of the Palatine Administrations.

In the 1988 Apostolic Constitution “Pastor Bonus”, Pope John Paul II established that “the Fabric of St Peter’s, in accord with its own regulations,” would continue to manage all aspects of the basilica, “with respect to the preservation and decoration of the building and behavior among the employees and pilgrims who come into the church.”

Cardinal Enrico Benedetto Stuart was an English cardinal whose brother was known as Bonnie Prince Charlie. He was born in Rome in 1725 and was of royal British lineage with claims to the throne of England through the Jacobite (Catholic) line of Stuarts. He spent his childhood in Rome and was later educated in Bologna.

In 1747, Pope Benedict XIV elevated him to the cardinalate; his ordination to the priesthood came soon after, in September of 1748. From that point he became the prefect of the Sacred Congregation of the Venerable Fabbrica di San Pietro. Other titles followed in quick succession, including being appointed Camerlengo in 1758, and later, Dean of the Sacred College of Cardinals. He was also present at conclaves electing at least the next three popes.

Later in his career, he chose to reside in the episcopal palace of Frascati, where he remained until his death. He is buried in the tomb of the Stuart family in the Vatican Grottoes, and there is also a funeral monument in Saint Peter’s.

Cardinal Stuart was considered to be a very generous man whose cardinalate was one of the longest in history: 60 years. He was the last to die of the cardinals appointed by Pope Benedict XIV.

This item is one more way Papal Artifacts portrays the living history of the papacy and the Catholic church. It is a valuable and rare addition to the Collection.

This is the translation of the license to carry weapons in the Papal States.

“The College
of Most Eminent and Most Reverend Lord Cardinals
of the Sacred congregation of the Reverend Fabric of S. Peter’s in Rome

The Bargelli, and other ministers of justice are not to molest Filippo Filippetti
for the carrying of any sort of offensive or defensive arms, whether in the Ecclesiastical
State (Papal States) or the city of Rome, except for those places prohibited by the Constitution
published on 13 August 1690 by the late Pope Alexander VIII, as long as
[Filippetti] is in actual service of Signor Marcelli, the Commissary of the Reverend Fabric of Saint
Peter’s in Rome, as long as he is in service there and the Commissary continues in office,
he must enjoy the privilege of such grant in the terms of the faculty and prerogative granted
by the Holy Father to the College of the Most Eminent and Most Reverend Cardinals of the Sacred
Congregation of the Reverend Fabric of S. Peter’s of Rome, as is expressed in more detail in
the Letters patent of the grant.

–Father Kunst is grateful to Professor John Adams for his translation of this document.