Blog
Papal Artifacts / Vatican News / May 15, 2022: The Canonization of Charles de Foucauld
May 14 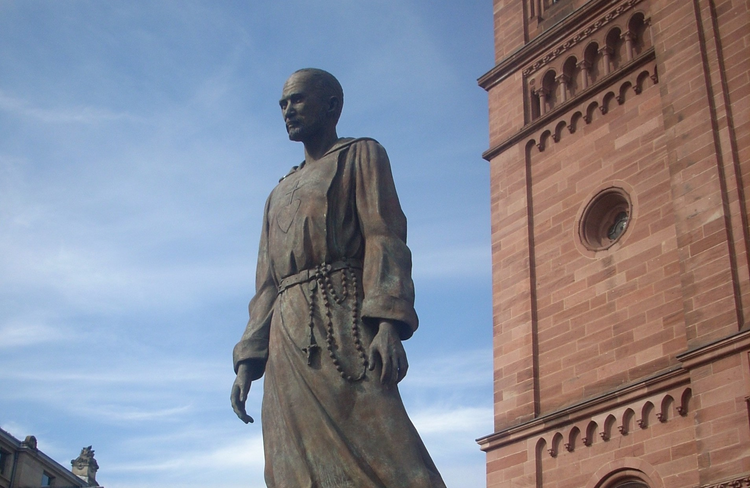 Apostle of the Poor and a man devoted to living the “Hidden Life” of Jesus, that is, the ordinary life of poor men and women, Charles was also deeply committed to interreligious dialogue.

And, finally, he was a martyr. Charles de Foucauld was one of the most remarkable Christians of this or any age. 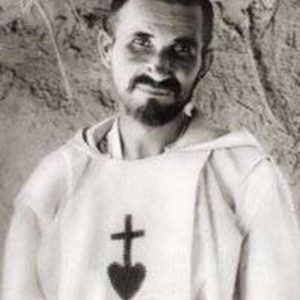 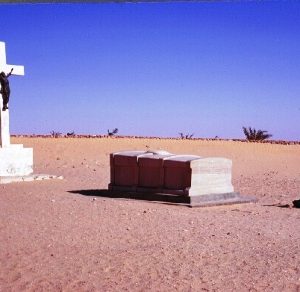 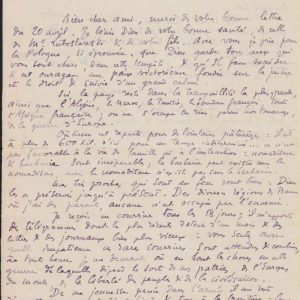 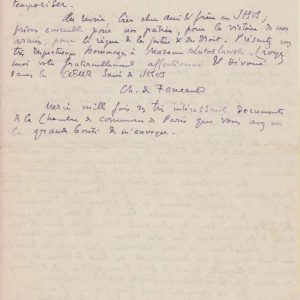 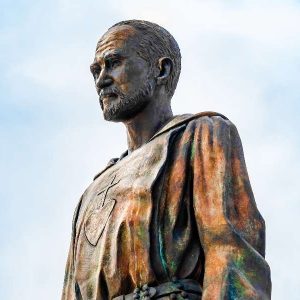 Who was Charles de Foucauld? Robert Ellsburg Tells Us

Robert Ellsberg is the editor in chief and publisher of Orbis Books.

By any conventional standard, the life of Charles de Foucauld (1858-1916)—soldier, explorer, monk and ultimately desert hermit—ended in failure. At the time of his violent death in a remote corner of the Sahara, he had published none of his spiritual writings; he had founded no congregation, nor attracted any followers. He could not claim responsibility for a single conversion. And yet his witness endured. Many today regard him as one of the great spiritual figures of the 20th century, a prophet whose message speaks more clearly to the challenges of our time than it did in his own. With his beatification on Nov. 13, the church will at last have given official recognition to his significance as one of those seekers who periodically manage to reinvent the imitation of Christ in a manner suited to the needs of their age, and thus invite others to read the Gospel in a new way.

Viscount Charles de Foucauld was born into a proudly aristocratic family in Strasbourg, France, in 1858. Orphaned at the age of 6, he was raised by his grandfather, a retired army colonel, who steered him toward a military career. Army life did not suit him. He graduated from the academy at the bottom of his class and earned a reputation as a decadent playboy. Posted to Algeria, he was dismissed from the army following a scandal in which he tried to pass off his mistress as the Viscountess de Foucauld.

The saving benefit from his military service was a fascination with the North African desert, to which he returned under the aegis of the French Geographical Society to undertake a dangerous exploration of Morocco. It was there that the experience of Muslim piety helped promote in Charles a dramatic recovery of his Catholic faith, changing his character and his life forever. “As soon as I believed that there was a God,” he later wrote, “I understood that I could not do anything other than live for him. My religious vocation dates from the same moment as my faith.”

A pilgrimage through the Holy Land, following the footsteps of Jesus in the actual towns and countryside where he had walked, made a profound impact. Afterward Foucauld entered the Trappists and spent a number of years in a monastery in Syria. But conventional monastic life did not satisfy him. If there is an essential insight that impressed Foucauld, it was the fact that Jesus, the Son of God, had been a poor man and a worker. As a carpenter in Nazareth Jesus had, in these lowly circumstances, embodied the Gospel message in its entirety before ever announcing it in words. This insight became the key not only to his interpretation of the Gospel, but to his own personal vocation.

Foucauld had spent many years conceiving and preparing the way for followers who never arrived. He might well have died with little sense of accomplishment, had his spirituality not trained him to look beyond outward appearances.At first he tried to put this into practice rather literally. For three years he worked as a servant at a convent of Poor Clares in Nazareth itself, living in the same place where Jesus had spent 30 years of his life and where he had now the unutterable, the inexpressibly profound happiness of raking manure. But eventually he realized that Nazareth might be any place. And so, after seeking ordination, he returned to Algeria, to the oasis of Béni-Abbès on the border of Morocco. His goal was to develop a new model of religious life, a community of Little Brothers, who would live among the poor in a spirit of service and prayerful solidarity. In the constitutions he devised for his planned order, Foucauld wrote, “The whole of our existence, the whole of our lives, should cry the Gospel from the rooftops…not by our words but by our lives.”

Foucauld spent 15 years in the desert. When he found the remote Béni-Abbès becoming too congested, he sought greater solitude in Tamanrasset, a small outpost in the rugged Hoggar. It was there on Dec. 1, 1916, that he met his death, killed by Tuareg rebels.

Foucauld had spent many years conceiving and preparing the way for followers who never arrived. He might well have died with little sense of accomplishment, had his spirituality not trained him to look beyond outward appearances. In his famous “Prayer of Abandonment,” he wrote: “Father, I abandon myself in your hands, do with me what you will. For whatever you may do, I thank you. I am ready for all, I accept all, let only your will be done in me, as in all your creatures.”

Ultimately, however, the reverberations from Foucauld’s solitary witness achieved considerable effect. In 1933, long after his death, René Voillaume and four companions left France for the Sahara. Modeling themselves on Foucauld’s example, they became the core of the Little Brothers of Jesus. A few years later they were joined by the Little Sisters of Jesus, founded by Madeline Hutin. Both fraternities, and their several offshoots, gradually spread throughout the world, their small communities taking up life among the poor and outcast, first in the Sahara Desert and eventually in many obscure corners of the globe.

Foucauld’s influence and challenge extend far beyond the numbers of his followers. His emphasis on the hidden life of Jesus bears implications for many aspects of Christian life today.

And yet Foucauld’s influence and challenge extend far beyond the numbers of his followers. His emphasis on the hidden life of Jesus bears implications for many aspects of Christian life today. For one thing, he anticipated a new model of contemplative life, not in a cloistered monastery but in the midst of the world. Thus he overcame the artificial divide between the religious and secular worlds, pointing to a way of holiness that is accessible to everyone, in whatever desert we may find ourselves.

Foucauld’s approach to mission is particularly significant. In contrast to the triumphalistic models of his day, Foucauld exemplified what has come to be known as an evangelism of presence, a willingness to encounter people of other faiths on a basis of equality and mutual respect. Although his asceticism was extreme by the standards of most missionaries, or even of the Trappist monks with whom he lived for a time in Syria, he essentially embraced the poverty of his neighbors. Foucauld wanted to bear witness to the Gospel by living it, by being a friend and brother to all. He knew how much the church undermines the credibility of its witness when its representatives enjoy a status and comfort far above the level of the poor.

Today, as never before, we are realizing the particular need for improved understanding between Christians and Muslims. Foucauld was himself killed by members of a Muslim sect whose fundamentalist zeal has obvious contemporary counterparts. And yet, if Foucauld’s path had been more characteristic of the encounter between Christians and Muslims in the past, who can say whether history might be different? In an age when Christianity is no longer synonymous with the outreach of Western civilization and colonial power, the witness of Foucauld—poor, unarmed, stripped of everything, relying on no greater authority than the power of Love—may well represent the face of the future church, a church rooted in the memory of its origins and of its poor founder.

After a century exhausted by grand projects, world wars and ostentatious display, Foucauld’s appreciation for the value of inconspicuous means, modest goals and the hidden life of faith and charity exerts a powerful and subversive challenge. It reminds us, among other things, that Christ himself pursued the path of apparent failure, choosing what is low and despised in the world, even things that are not, to bring to nothing things that are (1 Cor 1:28).

Shortly before his death, Foucauld summarized his spirituality in a brief testament. It describes an approach to mission, a form of bearing witness to the Gospel, available to every person, in whatever circumstance: “Jesus came to Nazareth, the place of the hidden life, of ordinary life, of family life, of prayer, work, obscurity, silent virtues, practiced with no witnesses other than God, his friends and neighbors. Nazareth, the place where most people lead their lives. We must infinitely respect the least of our brothers…let us mingle with them. Let us be one of them to the extent that God wishes…and treat them fraternally in order to have the honor and joy of being accepted as one of them.”

Robert Ellsberg  is the editor of Charles de Foucauld: Selected Writings (Orbis) and author of the recently published Blessed Among All Women: Women Saints, Prophets, and Witnesses for Our Time (Crossroad).