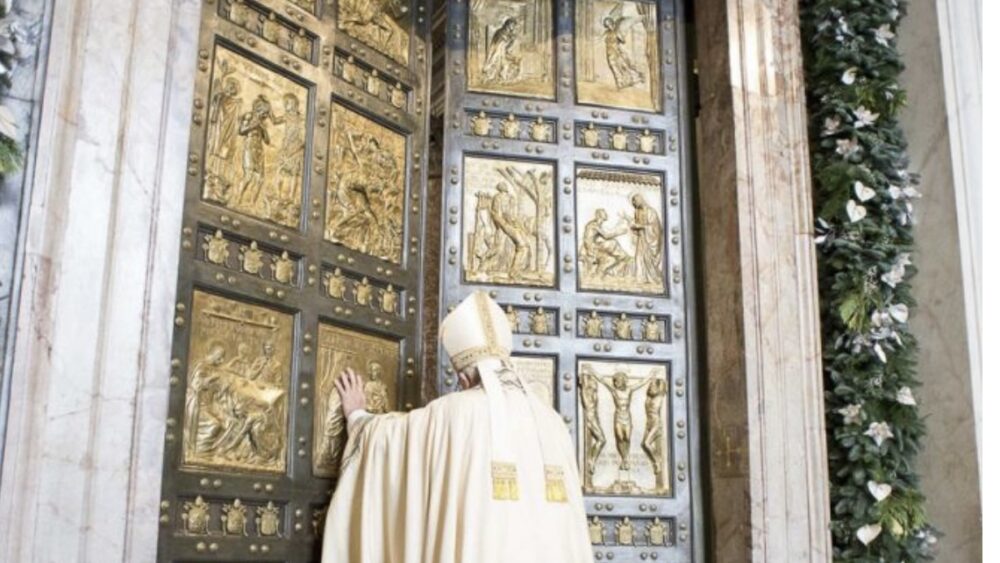 Vatican Unveils Motto for the 2025 Jubilee

Preparations are already underway in Rome for the 2025 Jubilee, a special year of grace and pilgrimage in the Catholic Church.

Archbishop Rino Fisichella met with Pope Francis this month to discuss the motto for the jubilee.

In a video published by Vatican News on Jan. 13, Fisichella revealed that the motto approved by the pope “can be summed up in two words: Pilgrims of Hope.”

Archbishop Fisichella leads the Vatican dicastery entrusted with the event’s organization, the Pontifical Council for the Promotion of the New Evangelization.

“There is so much work to be done,” he said.

The 2025 Jubilee will include the opening of the Holy Door in St. Peter’s Basilica. Pilgrims who pass through the door – which is only opened during Jubilee years, ordinarily every 25 years or when a pope calls for an extraordinary Jubilee – can receive a plenary indulgence under the usual conditions.

The four major basilicas in Rome all have Holy Doors. During the Extraordinary Jubilee of 2015, Pope Francis also granted cathedral churches around the world permission to establish and open a Holy Door.

Jubilees have biblical roots, as the Mosaic era established jubilee years to be held every 50 years for the freeing of slaves and forgiveness of debts as manifestations of God’s mercy.

The practice was re-established in 1300 by Boniface VIII. Pilgrims to Rome were granted a plenary indulgence. Between 1300 and 2000, 29 jubilee years were held in Rome.

“To pass through the Holy Door means to rediscover the infinite mercy of the Father who welcomes everyone and goes out personally to encounter each of them. It is he who seeks us! It is he who comes to encounter us,” Pope Francis said as he opened the jubilee Holy Door on St. Peter’s Basilica on Dec. 8, 2015.

“In passing through the Holy Door, then, may we feel that we ourselves are part of this mystery of love, of tenderness. Let us set aside all fear and dread, for these do not befit men and women who are loved. Instead, let us experience the joy of encountering that grace which transforms all things,” he said.