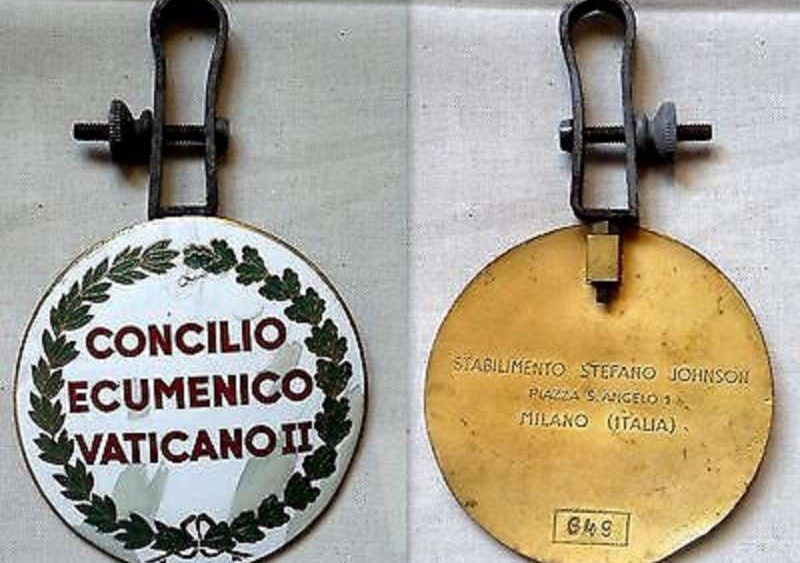 Vatican II, Fulton Sheen, His Assistant & A Papal Artifact’s Medallion Like the One Featured in This Story!

All automobiles used during Vatican II to transport prelates from various locations to the Council were identified by a small enameled plate that said Concilio Ecumenico Vaticano II.

The obverse side identified the person to whom the numbered pass was issued. Monsignor Hilary Franco was just a young priest — “naive” even, in his own words — when he called the office of Bishop Fulton J. Sheen, the celebrated theologian, author, and TV presenter, to ask for a meeting in August 1959.

The first encounter between the busy auxiliary bishop of New York and the Bronx priest, supposed to be just 15 minutes, extended to more than 40. Other invitations to now Venerable Sheen’s residence followed. And not many months afterward, the bishop asked Franco if he would assist him in his preparatory work for the Catholic Church’s upcoming ecumenical council.

“That was the beginning,” Franco told CNA via video call from New York City last month.

The priest worked on the preparatory documents of the Second Vatican Council as a “peritus,” or expert, and by 1962 became Sheen’s full-time assistant, traveling with him to Rome for the months-long conciliar sessions held from 1962 to 1965.https://e0d1678e39624e850ab30485c6d53a0c.safeframe.googlesyndication.com/safeframe/1-0-38/html/container.html

“Nowadays, I realize what the council did for the world, and not only for the Church,” Franco said. “No one is talking about something that really was … a revolution in the true sense of the word.”

Eyewitness to the council

When he arrived in Rome for the opening of Vatican II — 60 years ago, on Oct. 11, 1962 — Franco was already well-versed with the city; he had studied for the priesthood in Rome, at the Pontifical Roman Seminary, about a decade prior.

He and other priest assistants would organize buses to bring the 78 U.S. bishops from their lodging up on Rome’s Monte Mario down to the Vatican.

At the time, the vice president of Hilton International was a Catholic convert inspired by Sheen, Franco said, which is why the bishops were put up at Rome’s then brand-new Hilton Hotel.

Franco, at Sheen’s request, also asked permission to have a chapel set up in one of the hotel’s spare rooms for the bishops to pray in.

If arriving at the Vatican by private vehicle, the priests were given a medallion to put on top of the car that would allow them to enter and park inside, he said, showing off the round magnet, still on his desk six decades later.

Franco said the morning sessions of the council, the general congregations, were mostly made up of 10-minute interventions, or speeches, by the 2,625 council fathers.

At the ninth minute, the council fathers would be warned their time was ending, and they should conclude, with the Latin exhortation: “Tempus tuum exhaustem est. Valeas concludere.”

“Everything was in Latin — there was no simultaneous translation at that time — so we [the assistants] had to do all the work for the bishops,” Franco said.

“The American bishops, they were wonderful, but their Latin was not really the greatest,” he continued. “I mean, they knew Latin because they would say Mass in Latin … but Latin was not their language. So we had to work for them, make translations for them.”

Franco’s spiritual director as a seminarian was Father Pericle Felici, an Italian priest and canonist who went on to become an important bishop and later cardinal of the Roman Curia.

Felici was also “one of the most famous Latinists at that time,” Franco said. When Felici died in 1982, United Press International (UPI) wrote that the cardinal “spoke perfect classical Latin and often preferred to hold conversations in the language.”

Felici also was secretary general of the Second Vatican Council.

“And I was kind of helping also in the General Secretariat” of the council, Franco said, “and that’s why I would be here, there, or wherever.”

The general congregations of Vatican II were held in the nave of St. Peter’s Basilica, with each of the more than 2,000 council fathers having an assigned seat based on seniority. The rows of tiered seats faced each other in the style of monastic choir stalls.

There also were two coffee bars in the council hall, Franco said, and they were typically bustling with bishops.

At Catholic News Agency, our team is committed to reporting the truth with courage, integrity, and fidelity to our faith. We provide news about the Church and the world, as seen through the teachings of the Catholic Church. When you subscribe to the CNA UPDATE, we’ll send you a daily email with links to the news you need and, occasionally, breaking news.

As part of this free service you may receive occasional offers from us at EWTN News and EWTN. We won’t rent or sell your information, and you can unsubscribe at any time.

He remembered clearly the moment when, on Nov. 9, 1964, it was announced that Bishop Fulton J. Sheen would be the next to speak.

“That was the only time that I remembered in the years of the council that those two bars were empty,” he said.

Franco also recalled a significant interview Sheen gave at the end of the third period of the council, in 1964, to journalist and Benedictine monk Father Placid Jordan.

Sheen said: “Pope John did what the Risen Lord did. The Church has been behind closed doors for centuries. He said: ‘Open the doors! There is a world waiting for salvation. Go into it!’ The Lord is again appearing behind the closed doors of the council as we debate and discuss, and there is no stepping back as we hear him say, in the words of the Apocalypse: ‘I have set before you an open door, and let no man close it.’”

Sheen’s beatification is on hold until the attorney general of New York investigates the state’s Catholic dioceses to determine whether leadership covered up clerical sexual abuse.

After 15 years as an auxiliary bishop of New York, Sheen was named Bishop of Rochester in 1966.

“And it’s interesting that some of the ideas that were debated in the council, we were actually debating them at lunch, the two of us,” he added. “Then later on I would realize that he really, really was a prophet in his own [right].”

“To me, Bishop Fulton J. Sheen was a holy man while he lived and died.

Hannah Brockhaus is Catholic News Agency’s senior Rome correspondent. She grew up in Omaha, Nebraska, and has a degree in English from Truman State University in Missouri.