A Word about the Oldest Artifact in the Collection

Anyone involved in social media knows the subject of the Knights of Malta’s controversy with Pope Francis is big news.

Here is a look at the Pope who recognized them as a religious order in 1113:

The following information is but one column from Crux Now, a reputable Catholic on line publication,  describing the story. 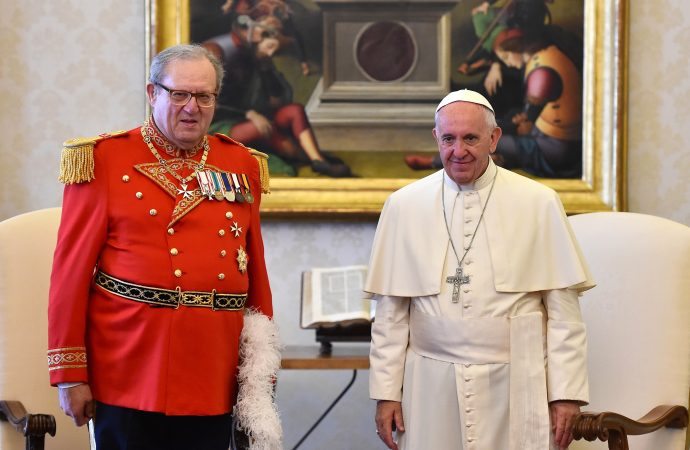 There may well be more behind the Order of Malta’s angry rebuttal of Pope Francis’s attempt to investigate alleged improprieties than meets the eye. Francis’s unhappy experience with the Knights in Argentina may have something to do with it.

What lies behind the spat between Pope Francis and the Knights of Malta? Of course, it could be what it seems to be: a conflict over authority and autonomy that is the result – as some are claiming – of a misunderstanding that will soon be resolved.

But the defiant language of the Knights suggests otherwise – as does a glimpse at Francis’s history with the order in Argentina.

To recap: On the pope’s instructions, the Vatican’s secretary of state, Cardinal Pietro Parolin, has created a five-man commission to investigate the allegedly unlawful removal of one of the Order of Malta’s most senior leaders.

The firing of the Grand Chancellor, Albrecht Boeselager, on December 6, after he refused to resign, was made by the Grand Master, Fra Matthew Festing, in the presence of the Order’s patron, Cardinal Raymond Burke, who is a cheerleader for conservative opposition to the Francis papacy.

The justification for the Festing-Burke move against Von Boeselager was that between 1989 and 2014, when he was in charge of the order’s international humanitarian arm, Malteser International, it financed aid agencies that distributed condoms to prevent AIDS among prostitutes in Myanmar, Kenya and South Sudan.

In a December 23 statement Von Boeselager says when he found out about this through an audit, he acted following advice from relevant committees, and the projects were closed. He says no mistakes were made, there was no concealment involved, and that to suggest he is other than a loyal Catholic obedient to church teachings is “absurd.”

The reason for the Vatican investigation is the Von Boesalager claim that there were no grounds for his ouster, that the order’s own procedures were not followed, and that Burke tried to invoke the Holy See’s support for the sacking when it never sanctioned such a move.

A December 12 letter from Parolin to Festing shows that the pope had given instructions to Burke in a December 1 letter which “asked that dialogue be the approach used to address and resolve potential problems.” Francis, says the secretary of state in that letter, “never mentioned, conversely, expelling anyone.”

The word ‘dialogue’ is underlined, as it is in the following sentence, when Parolin says that “notwithstanding the unpleasant and perilous turn taken by events, it might still be possible, by way of dialogue, to find a prudent way forward.”

Festing however stuck to his guns, insisting that the decision to sack Von Boesalager was taken “fully in accordance with the instructions” relayed by Cardinal Burke. As result, on December 22 Parolin instituted his commission of inquiry, which met on January 5 and has begun hearing from witnesses.

The Knights’ reaction to the inquiry has been to declare that it has “legal irrelevance” because the order is sovereign, that the decision to fire  was an “internal act of the government of the order,” and that it “has decided it should not cooperate” with the investigation.

The leadership goes on to warn members of the Order who speak to the inquiry that they are not allowed to dissent from Festing’s decision to sack Von Boeselager.

This language of defiance is remarkable. It is hard to recall another example of a Catholic organization rebuffing papal authority in this way.

The Order may have temporal autonomy and diplomatic sovereignty (it even issues its own passports) but as a Catholic organization it professes obedience to the pope in religious matters. The inquiry’s head, Archbishop Silvano Tomasi, points out that the order’s own article 62 declares that Knights and their chaplains “bind themselves to obey the Holy Father.”

The two may be wholly unconnected, but this is not the first time that Francis has faced hostility from the Knights of Malta, some of whose leading figures were involved in an unsuccessful plot in 2008 to remove Cardinal Jorge Mario Bergoglio as Archbishop of Buenos Aires and replace him with a chaplain to the Knights, the Bishop of Zárate-Campana, Oscar Sarlinga.

Bizarre as it sounds, the plot was widely spoken of at the time, and has since been confirmed by a number of those involved, including Sarlinga himself – although he denies being in favor of the idea – in an interview to the religious correspondent to La Nación, Mariano Vedia, for his book, En Nombre del Papa (‘In the Name of the Pope’).

The plot originated with a Peronist adviser to Néstor Kirchner who reached out to a group of conservative Catholics including the nuncio to Argentina, Adriano Bernardini. Both sides saw it as a way of breaking the impasse between Bergoglio and the Kirchner government, and resolving a number of issues that were unresolved between the Holy See and the Argentine state.

The plan was to accentuate the tension further, then moot Bergoglio’s removal to head a Vatican congregation as a solution, naming Sarlinga to Buenos Aires.

It soon failed, in part because left-wing Peronists around Kirchner’s wife Cristina spotted a right-wing church manoeuvre, and in part because of Bergoglio’s close relations with Pope Benedict. But it threw light on a group that was influential with the then Secretariat of State.

Sarlinga was close to two other prominent Knights, both vigorous opponents of Bergoglio’s: Argentina’s powerful former ambassador to the Holy See, Esteban ‘Cacho’ Caselli, a wealthy businessman with close ties to former Secretary of State Cardinal Angelo Sodano, and later an Italian senator; and Héctor Aguer, Archbishop of La Plata, Bergoglio’s principal opponent in the bishops’ conference, who is a chaplain to the order.

Caselli’s son, Antonio Manuel, also a businessman, was the Knights’ ambassador to Argentina throughout Bergoglio’s period as archbishop.

The combination of Sodano – who was no longer Secretary of State after 2006 but remained influential – and Esteban Caselli in Rome, plus Bernardini, Antonio Manuel Caselli and Aguer in Buenos Aires, was widely regarded as the nexus behind the appointment of a number of conservative episcopal appointments in Argentina made over the heads of Bergoglio and the bishops’ conference.

Two of them, Sarlinga and José Luis Mollaghan of Rosario, who clashed with the then Archbishop of Buenos Aires over pastoral questions, have since Francis’s election left their dioceses. Mollaghan was summoned to work at the Vatican’s Congregation for the Doctrine of the Faith in 2014, but is currently living in Buenos Aires. Sarlinga was ousted in 2015 – following scandals involving misuse of church funds.

It would be fair to say, in sum, that Francis’s experience of the Knights has been of a group of wealthy, powerful individuals who formed part of a conservative Vatican-Argentine nexus which sought to bypass and block him and the local Church.

To say that this aspect of the chivalric order exists at the opposite pole from Francis’s call for a pastoral conversion is something of an understatement. The linking of ecclesiastic politics and high finance in Knights such as Caselli – who once sent Bergoglio a first-class ticket to Rome and received it back shred into pieces – is a strong example of what Francis calls “spiritual worldliness.”

Of course, all that history may have nothing to do with the current spat. But when a Catholic organization angrily refuses to hold itself accountable to papal authority, there’s usually something more going on beneath the surface than a procedural issue involving personnel.

It’s possible that the Knights have detected the beginnings of an attempt by Francis to intervene and reform the order which they are trying to cut off at the pass. Allow this investigation, they may think, and others will soon follow.

They could be right.