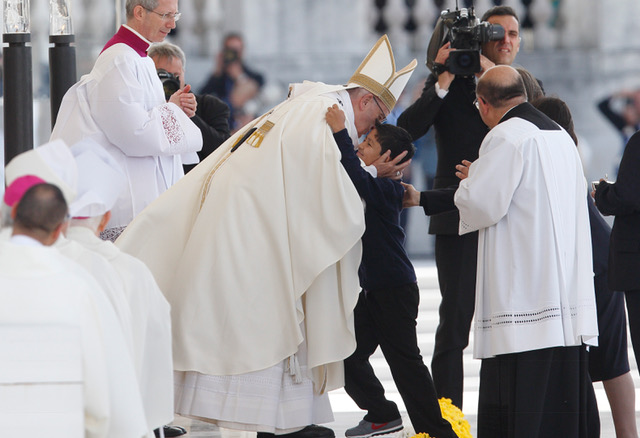 Lucas Batista Maeda de Mourao, a ten-year-old Brazilian boy who was miraculously cured through the intercession of Francisco and Jacinta, was here for the canonization. Four years ago, he fell from the window of his grandfather’s home and suffered such serious brain damage. As his distraught father picked him up off the sidewalk to take him to the hospital, he invoked the intercession of Our Lady, Francisco, and Jacinta. That same night he and a local community of Carmelite nuns prayed to the two young seers to intercede with God to cure the boy. Some days later, to the amazement of the doctors, the young boy got up and walked home completely cured. Last February, the Vatican’s Congregation for the Causes of Saints concluded unanimously that his cure could not be scientifically explained. Francis recognized his cure as the miracle that opened the door to their canonization. The pope embraced and kissed Lucas tenderly when he brought up the offertory gifts.

History was made at the shrine of Fatima at 10.30 a.m. on May 13 when Pope Francis declared that Francisco Marto and his sister Jacinta are saints. Francisco and Jacinta are the first child saints who are not martyrs in the history of the church.

Francisco, Jacinta and their cousin Lucia are buried here side by side in the basilica. Before Mass, Francis prayed in silence at the tombs of the three shepherd children. When Jacinta’s body was exhumed before being brought here, 15 years after her death, it was found to be totally uncorrupted. Because of this, the local bishop asked Lucia, by then a contemplative nun, to write the memoirs of Jacinta and Francisco.

In Fatima, Pope Francis said that “we have gathered here to give thanks to God for the countless graces bestowed over these past hundred years” starting here in Portugal and extending to “the four corners of the earth.”

He reminded those gathered that Our Lady introduced Sts. Francisco and Jacinta “into the immense ocean of God’s light and taught to adore him” and that this was “the source of their strength in overcoming opposition and suffering.”

Using references to the secrets of Fatima, Pope Francis’ words suggested that he was referring to the dramatic situation in the world today and his own ministry “as a bishop dressed in white.” Francis recalled that Jacinta was granted a vision and asked “Do you not see all those streets, all those paths and fields full of people crying out for food, yet have nothing to eat? And the Holy Father in a church, praying before the Immaculate Heart of Mary? And all those people praying with him?”

The statement was made in Portuguese:

“For the honor of the Blessed Trinity, the exaltation of the Catholic faith and the increase of the Christian life, by the authority of our Lord Jesus Christ, and of the holy Apostles Peter and Paul, and our own, after due deliberation and frequent prayer for divine assistance, and having sought the counsel of many of our brother bishops, we declare and define Blessed Francisco and Jacinta Marto, be saints and we enroll them among the saints, decreeing that they are to be venerated as such by the whole Church. In the name of the Holy Father, and of the Son, and of the Holy Spirit.”