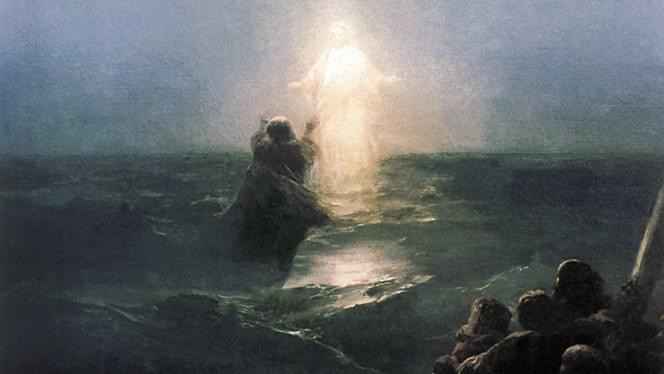 The Gospel on August 3rd & A Reflection from Bp. Robert Barron

Friends, our Gospel today is the story of Jesus walking on the water. Water is, throughout the Scriptures, a symbol of danger. At the very beginning, the Spirit of the Lord hovered over the surface of the waters. This signals God’s lordship over all of the powers of disorder.

The boat, with Peter and the other disciples, is evocative of the Church. It moves through the waters, as the Church will move through time. Storms—chaos, corruption, stupidity, danger, persecution—will inevitably arise. Now, during the fourth watch of the night, which is to say the darkest time of the night, Jesus comes walking on the sea.

This is meant to be an affirmation of his divinity: just as the Spirit of God hovered over the waters at the beginning, so Jesus hovers over them now. So he says to his terrified disciples: “Take courage, it is I; do not be afraid.” But even more than that: you can participate in my power. “Peter got out of the boat and began to walk on the water toward Jesus.” This is the story of all the saints.

Jesus made the disciples get into a boat
and precede him to the other side of the sea,
while he dismissed the crowds.
After doing so, he went up on the mountain by himself to pray.
When it was evening he was there alone.
Meanwhile the boat, already a few miles offshore,
was being tossed about by the waves, for the wind was against it.
During the fourth watch of the night,
he came toward them, walking on the sea.
When the disciples saw him walking on the sea they were terrified.
“It is a ghost,” they said, and they cried out in fear.
At once Jesus spoke to them, “Take courage, it is I; do not be afraid.”
Peter said to him in reply,
“Lord, if it is you, command me to come to you on the water.”
He said, “Come.”
Peter got out of the boat and began to walk on the water toward Jesus.
But when he saw how strong the wind was he became frightened;
and, beginning to sink, he cried out, “Lord, save me!”
Immediately Jesus stretched out his hand and caught him,
and said to him, “O you of little faith, why did you doubt?”
After they got into the boat, the wind died down.
Those who were in the boat did him homage, saying,
“Truly, you are the Son of God.”

After making the crossing, they came to land at Gennesaret.
When the men of that place recognized him,
they sent word to all the surrounding country.
People brought to him all those who were sick
and begged him that they might touch only the tassel on his cloak,
and as many as touched it were healed.