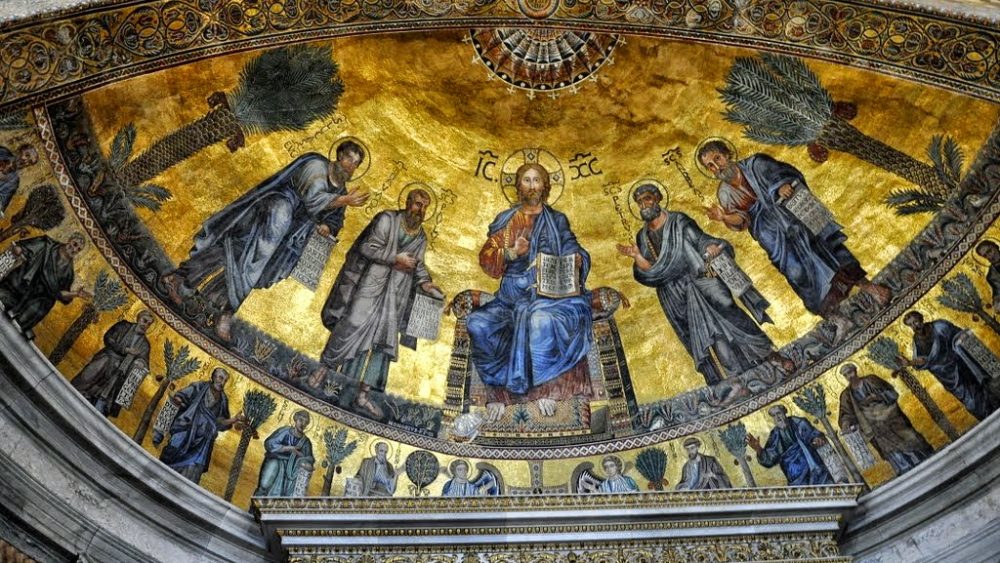 Pope Innocent III commissioned Pietro Cavallini (1259 – c. 1330) for the fresco cycles for the Basilica di San Paolo fuori le Mura, including the apse which is 24 metres wide and 12 metres long.
On the death of Innocent III, Pope Honorius III called on another group of Venetian artists who had worked on the Basilica of Saint Mark in Venice to complete the team of mosaicists for the project.
He caused to be added the prostate figure of himself as Pope at the foot of Christ.
On the night of July 15, 1823, a fire destroyed the  Basilica which over decades was reconstructed identically to what it had been before, utilizing all the elements which had survived the fire including the mosaic of Honorius.
On Sunday, September 29, 1963 shortly after his election Blessed Pope Paul VI delivered a one hour address at the beginning of the Second Session of the Second Vatican Council.
In an important part of his address he referred to the image of Pope Honorius III prostrate before the feet of Christ in the great mosaic in the Apse of Saint Paul Outside the Walls.

“Here we make  our own the words of the Sacred Liturgy: “We only recognise you, O Christ, – with pure and simple heart – we ask you crying and singing: – Listen to our prayers!” (Roman Breviary , Hymn for Lauds on Wednesday [in the Liturgy of the Hours , the I and III week of the Psalter, with changes]).

In speaking these words, before our astonished and trembling eyes  Jesus himself stands before us, filled with grand majesty as seen in the image of the Pantocrator in your Basilicas, Venerable Brethren of the Eastern Churches, and also in the West.

We seem to take the role of our predecessor Honorius III who worships Christ, as he is depicted in the magnificent  mosaic in the apse of the Basilica of St. Paul Outside the Walls.

That Pontiff, depicted in a miniature size with his  body almost totally prostrate on the ground, kissing the feet of Christ, who, dominating the great mosaic, cloaked and seated in regal majesty as a teacher, blesses the crowd gathered in the Basilica, and who is the Church. And in this scene not just a picture painted on the wall with lines and colours, but a real event, in our assembly, which recognizes Christ as the principal cause of the Redemption of man and who is the Church.

At the same time the scene similarly recognizes that the Church is a mysterious and physical  emanation and extension of Christ himself. It is as if that the eyes of our mind were touched by that vision of the Apocalypse that the Apostle John describes in these words: “And he showed me a river of the water of life, clear as crystal, flowing from the throne of God and of  the Lamb “(Revelation  22,1).

This council should have as its starting point this vision, or mystical celebration, which acknowledges Him, our Lord Jesus Christ, to be the Incarnate Word, the Son of God and the Son of Man, the Redeemer of the world, the Hope of humanity and its Supreme Master, the Good Shepherd, the Bread of Life, the High Priest and our Victim, the sole Mediator between God and men, the Savior of the world, the eternal King of ages; and which declares that we are His chosen ones, His disciples, His apostles, His witnesses, His ministers, His representa­tives, and His living members together with the whole company of the faithful.”

Pope Paul went on to explain four objectives of the Council’s work:

(1) the enunciation of a fairly precise definition of the Church itself;

(2) the renewal of the Church, that is, pruning and correcting herself in conformity with the model given in Christ;

(3) the promotion of unity among all Christians (with Paul’s heartfelt word of regret and forgiveness addressed to other Christians, and he turned to the non-Catholic Council observers at this point) and

(4) taking up dialogue with the world, solicitous for the poor and afflicted, while showing respect for promoters of culture, learning, science, and art, and for leaders of nations 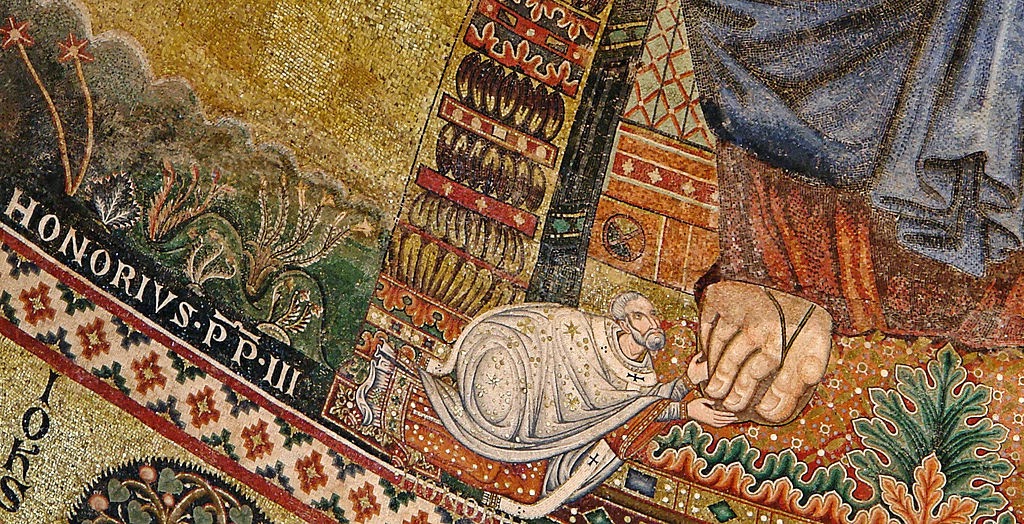 St. Paul Outside the Walls: Apse: Close up of Pope Honorius