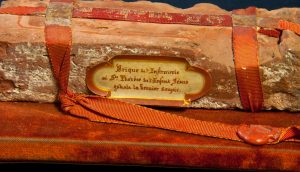 St. Therese of the Child Jesus is probably the most beloved saint of the 20th century.  She died at age 24 after begging Pope Leo XIII to allow her to enter the Carmelite convent in Lisieux, Calvados, France, at age 15.  Not only is she beloved and venerated because of her “Little Way” of spirituality, she is deemed by the hierarchy of the Church as a Doctor.  Pope St. Pius X called her the “greatest saint of modern times.”  She was beatified in 1923 and canonized by Pope Pius XI on May 17, 1925, only 28 years after her death.

It is understandable, then, that someone who loved this young saint would esteem her so highly that a brick from the infirmary where she died would become an object of veneration, treated so lovingly that it was given a stand wrapped in velvet and secured with ribbon and a wax seal, verifying its authenticity.

The placard on the front reads, simply that this is a brick from the infirmary where Therese of the Infant Jesus exhaled her last breath.

The care which the brick was given attests to its original owner’s love for St. Therese.  Having anything belonging to or associated with her is of great value to this Collection, and this is a very unique relic.