St. Jean Vianney: A Sweat Cloth with Document of Authenticity 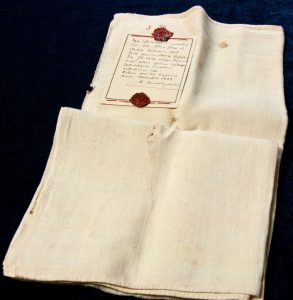 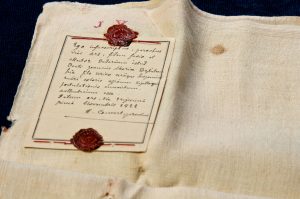 This item is a cloth for wiping sweat from the face, as a towel or a handkerchief.  The red wax seal authenticates the cloth as a genuine artifact used by St. Jean Vianney, and is, thus, a 2nd class relic.

Jean-Marie Vianney was a French parish priest born May 8, 1786 in the village of Dardilly to a family of farmers. He was the fourth of six children whose parents were known for both their generosity and their piety. Vianney’s youth was marked by the French Revolution, which began in 1790 and made the practice of the Catholic faith illegal. Priests offered the sacrifice of the Mass in secret risking their lives to do so. Vianney was inspired by and came to regard these men as heroes. Throughout his preparation for Communion and Confirmation, this secrecy continued until in 1802 it once again became legal to practice the Catholic faith.

How Good It Is to Love You: St. Jean Vianney’s Prayer:

My Jesus, from all eternity you were pleased to give yourself to us in love. And you planted within us a deep spiritual desire that can only be satisfied by yourself. I may go from here to the other end of the world, from one country to another, from riches to greater riches, from pleasure to pleasure, and still I shall not be content. All the world cannot satisfy the immortal soul. It would be like trying to feed a starving man with a single grain of wheat. We can only be satisfied by setting our hearts, imperfect as they are, on you. We are made to love you; you created us as your lovers. It sometimes happens that the more we know a neighbor, the less we love him. But with you it is quite the opposite. The more we know you, the more we love you. Knowledge of you kindles such a fire in our souls that we have no energy left for worldly desires. My Jesus, how good it is to love you. Let me be like your disciples on Mount Tabor, seeing nothing else but you. Let us be like two bosom friends, neither of whom can ever bear to offend the other.