Pope Pius VI died in exile as a prisoner of Napoleon in August of 1799. His emergency plan was for the next conclave to meet in Venice, which was free from French control and under the protection of the Holy Roman Emperor. Thirty-four cardinals gathered in a Benedictine monastery outside of Venice. The emperor bore the expense of the conclave in an attempt to influence its outcome. It was only due to the eloquence of the secretary of the conclave, Bishop Ercole Consalvo that Chiaramonte was unanimously elected after more than three months’ deliberation. He was fifty-eight years of age and would rule as Pius VII for twenty-three years.

Although he took the name of his predecessor in solidarity with his suffering, he was very different from him. Pius VII was considered to be modest, unassuming and realistic about the changes in a new and modern world. While resolute in all things Catholic, he was willing to bend when necessary. He was fortunate to be blessed with able advisors, the most important of whom was his Secretary of State, (now) Cardinal Consalvi who proved to be a brilliant statesman and remained with Pius VII in different capacities throughout his entire papacy. Pius proved to be capable of appointing many able advisors who contributed immensely to the success of his papacy despite the political challenges imposed on it by the rule of Napoleon.

In the summer of 1823, Pius VII broke his leg and was unable to recover from the wound. Two weeks earlier, a fire had devastated his beloved church, St. Paul Outside the Walls, the abbey where he had both studied and taught in his younger years. He was not even told of the fire and died in August. He was buried in a mausoleum erected by Thorwaldsen in St. Peter’s Basilica. 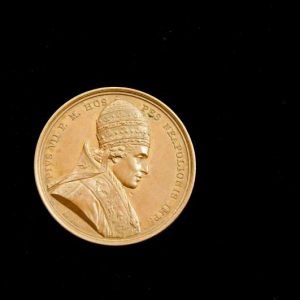 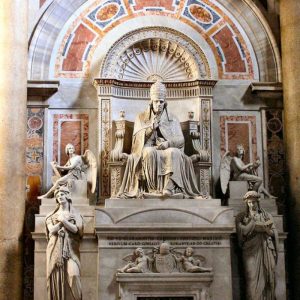