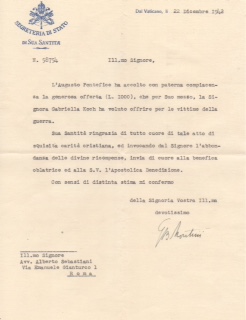 Giovanni Montini served as the Sostituto to Pope Pius XII from his election in 1939 until he was made Bishop of Milan in 1954.  This is a letter, written and signed by him in 1949 to Mr. Irving Geist, a benefactor in New York City whose generosity in relief work was made known to the Pope through Francis Cardinal Spellman.

The 1949 hand signed letter is inperfect condition and the autograph is of high quality.

The signature is of the future Pope Paul VI who was beatified in 2014.  That alone makes anything belonging to or associated with him of great and sacred value. 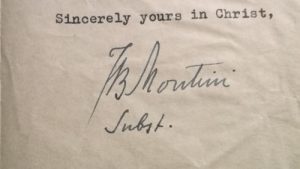 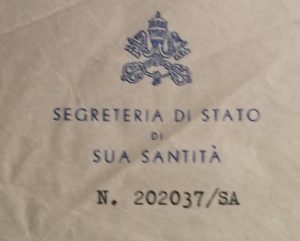 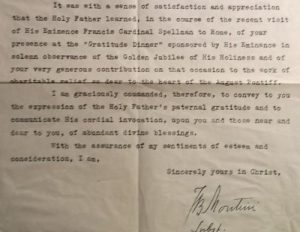 Montini 1949 Letter: Close up of Signature

Here are the contents of the letter:

It was with a sense of satisfaction and appreciation that the Holy Father Learned, in the course of the recent visit of His Eminence, Francis Cardinal Spellman to Rome, of your presence at the “Gratitude Dinner” sponsored by His Eminence in solemn observance of the Golden Jubilee of His Holiness and of your very generous contribution on that occasion to the work of charitable relief so dear to the heart of the August Pontiff.

I am graciously commanded, therefore, to convey to you the expression of the Holy Father’s paternal gratitude and to communicate His cordial invocation, upon you and those near and dear to you, of abundant divine blessings.

With assurance of my sentiments of esteem and consideration, I am.

Sincerely yours in Christ,