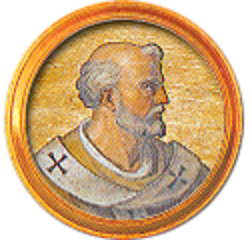 Gregorio Papareschi, was Pope from 14 February 1130 to his death in 1143. His election was controversial and the first eight years of his reign were marked by a struggle for recognition against the supporters of Antipope Anacletus II. He reached an understanding with Lothair II, the  Holy Roman Emperor who supported him against Anacletus and whom he crowned King of the Romans. Innocent went on to preside over the Second Lateran council.

Papareschi came from a Roman family, probably of the rione Trastevere. He was probably one of the clergy in personal attendance on the Antipope Clement III (Guibert of Ravenna).

Pope Paschal II made him a cardinal deacon. In this capacity, he accompanied Pope Gelasius II when he was driven into France. He was selected by Pope Callixtus II for various important and difficult missions, such as the one to Worms for the conclusion of the Concordat of Worms, the peace accord made with Holy Roman Emperor, Henry V in 1122, and also the one to France in 1123 that made peace with King Louis VI.

In 1130, as Pope Honorius II lay dying, the cardinals decided to entrust the election to a commission of eight men led by papal chancellor Haimeric, who had his candidate Cardinal Gregory Papareschi hastily elected as Pope Innocent II. He was consecrated onFebruary 14, 1130, the day after Honorius’ death. The other cardinals announced that Innocent had not been canonically elected and chose Cardinal Pietro Pierleoni, a Roman whose family were the enemy of Haimeric’s supporters, the Frangipani.

Pierleoni took the name Pope Anacletus II. Anacletus’ mixed group of supporters were powerful enough to take control of Rome while Innocent was forced to flee north. Based on a simple majority of the entire college of cardinals, Anacletus was the canonically elected pope, and Innocent was the anti-Pope. However, the legislation of Pope Nicholas II pre-empted the choice of the majority of the cardinal priests and cardinal deacons. This rule was changed by the Second Lateran council of 1139.

Anacletus had control of Rome, so Innocent II went to Pisa and sailed by way of Genoa to France, where the influence of Bernard of Clairvaux readily secured his cordial recognition by the clergy and the court.

In October of the same year he was duly acknowledged by Holy Roman Emperor Lothair III and his bishops at the synod of Würzburg. In January 1131, he had also a favorable interview with Henry I of England, and in August 1132 Lothair III undertook an expedition to Italy for the double purpose of setting aside Anacletus as antipope and of being crowned by Innocent.

Anacletus and his supporters being in secure control of St. Peter’s Basilica, the coronation ultimately took place in the Lateran Church (June 4,1133), but otherwise the expedition proved abortive. At the investiture of Lothair as Emperor he gained the territories belonging to Matilda of Tuscany in return for an annuity to be paid to the pope, in consequence of which the curial party based the contention that the Emperor was a vassal of the Papal see.

A second expedition by Lothair III in 1136 was not more decisive in its results, and the protracted struggle between the rival pontiffs was terminated only by the death of Anacletus II on January 25 1138.

The mosaic featured below is in the church Santa Maria in Trastevere, which was rebuilt by Innocent: the Pope, holding a model of the church in his arms, stands at the far left, beside Sts. Laurentius and Calixtus.

By the Second Lateran Council of 1139, at which King Roger II of Sicily, Innocent II’s most uncompromising foe, was excommunicated, peace was at last restored to the Church. Aside from the complete rebuilding of the ancient church of Santa Maria in Trastevere, which boldly features Ionic capitals from former colonnades in the Baths of Caracalla and other richly detailed spolia from Roman monuments, the remaining years of this Pope’s life were almost as barren of permanent political results as the first had been. His efforts to undo the mischief wrought in Rome by the long schism were almost entirely neutralized by a quarrel with his erstwhile supporter, Louis VII of France over the candidate for archbishop of Bourges, in the course of which that kingdom was laid under an interdict to press for the papal candidate, and by a struggle with the town of Tivoli in which he became involved. As a result, Roman factions that wished Tivoli annihilated took up arms against Innocent.

It was also in 1139 that, in the Omne Datum Optimum, Innocent II declared that the Knights Templar—a religious and military organization then twenty-one years old—should in the future be answerable only to the papacy. This was a keystone in the Templars’ ever increasing power and wealth, and ironically helped to bring about their violent suppression in October 1307.

On  July 22, 1139, at Galluccio, Roger II’s son Roger III, Duke of Apulia, ambushed the papal troops with a thousand knights and captured Innocent. On July 25,1139, Innocent was forced to acknowledge the kingship and possessions of Roger with the Treaty of Mignano. In 1143, Innocent refused to recognize the Treaty of Mignano with Roger of Sicily, who sent Robert of Selby to march on papal Benevento. The terms agreed upon at Mignano were then recognized. Innocent II died on September 24, 1143, and was succeeded by Pope Celestine II.

The doctrinal questions which he was called on to decide were those that condemned the opinions of Pierre Abélard and of Arnold of Brescia.

In 1143, as the Pope lay dying, the Commune of Rome, to resist papal power, began deliberations that officially reinstated the Roman Senate the following year. The Pope was interred in a porphyry sarcophagus that contemporary tradition asserted had been the Emperor Hadrian’s.

Pope Innocent II was eventually buried in Santa Maria in Trastevere, the church he completely rebuilt. 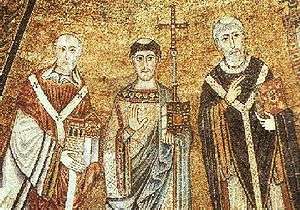 Santa Maria in Trastevere, Mpsaic with Innocent II on Left 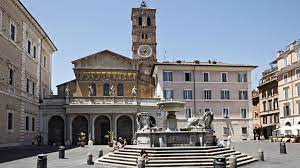 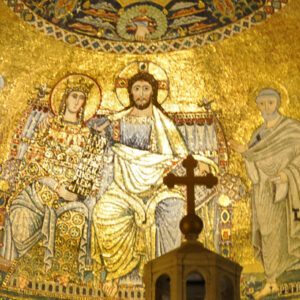 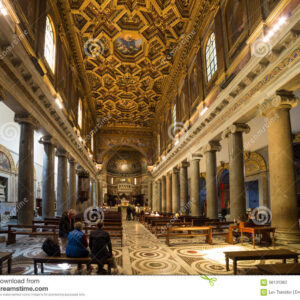 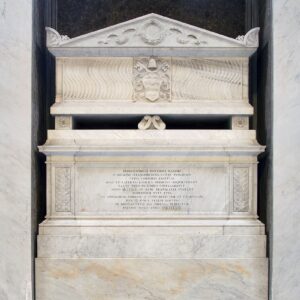 Tomb of Innocent II in Santa Maria in Trastevere