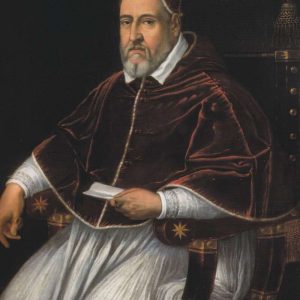 Ippolito Aldobrandini was born at Fano in 1536, the son of a distinguished Florentine barrister. Through the generosity of Cardinal Alessandro Farnese, the future Pope Paul III, he studied law at Padua, Perugia and Bologna. By 1569 Aldobrandini was serving in various capacities under Pius V. They included being a consistatorial advocate and an auditor of the Rota, the Supreme Court, or tribunal of the Church. He was also sent on a diplomatic mission to Spain. Although unsuccessful, it did introduce him to a wider political world, an invaluable experience for his future.

In 1580, Aldobrandini was ordained a priest probably due to the influence of his confessor, (St.) Philip Neri (1515- 1595). Under Sixtus V he rose rapidly, holding many responsible positions before being named a cardinal-priest in 1585, and the papal legate to Poland in 1588. While there he distinguished himself and won the gratitude of the Hapsburgs when he obtained the release of the imprisoned archduke, Maximilian, who had been defeated in the bid for the Polish throne and subsequently imprisoned.

Wikipedia states that after the death of Innocent IX, another stormy conclave ensued, where a determined minority of Italian cardinals were unwilling to be dictated to by Philip II of Spain. Cardinal Aldobrandini’s election in January of 1592 was received as a sign of a more balanced and liberal papal policy in European affairs.

Taking the name of Clement VIII, a name suggested to him by his confessor, Philip Neri, he would prove to have an unlimited capacity for work, a lawyer’s eye for detail and great capacity as a statesman. Freeing the papacy from its dependence upon Spain was a primary objective.

Prior to his election, the preceding three papacies had totaled sixteen months. Despite the problems of the conclave that elected him, Aldobrandini’s relative youth contributed to his election as he was only fifty-five years of age. He had not anticipated his election. Prior to acceptance he asked to approach the altar saying in all humility, O my God! Let my tongue dry up, that I may not consent to this election, unless it be for the good of thy Church, which I love from the very bottom of my heart, and of Christendom, whose glory and prosperity I desire. The cardinals of the conclave were greatly impressed by his modesty and soon insisted upon his investiture as their next pontiff.

His objective to free the papacy from Spanish domination would come through a major achievement of Clement’s papacy—the reconciliation to the Church of Henry IV of France. Long negotiations carried on with great dexterity resolved the complicated situation there. In 1593, Henry IV converted to Catholicism and in 1598, the pope accepted the Edict of Nantes which granted religious freedom and civil rights to the Huguenots, thereby ending the horrific thirty-year religious war. He also gained a powerful ally for the Church who would determine future political outcomes during Clement’s papacy.

The Papal States were expanded during Clement’s reign when a notable Italian duke, Alfonses II, died childless in 1597. Spain and the Empire, who opposed the expansion were unable to counter the influence of Henry IV of France on the ruling. And so this land reverted to the Holy See.

In 1598, Clement won more credit when he successfully negotiated a peace treaty between Spain and France known as the Peace of Vervins. He was also instrumental in providing men and money to the Emperor in his struggles with the Turks in Hungary.

Bandits still roamed in the province of Umbria and Clement was as ruthless as Sixtus V in crushing them.

But Clement’s papacy is remembered for more than his political achievements. He was deeply spiritual and would often take a confessional in St. Peter’s so that anyone could go to him if they chose. He also did much to promote the Forty Hours’ Devotion.

In 1595 he saw the return of Poland to Roman Catholic Christianity from Orthodox Christianity. In 1599 he appointed Francis de Sales, canonized in 1665, as bishop of Geneva, thereby advancing the faith in Switzerland. He made Robert Bellarmine a cardinal and enjoyed a close friendship with his confessor, Philip Neri, for over thirty years. All of these men were later canonized.

Clement was a tireless reformer in the mold of the Catholic (Counter) Reformation. He worked hard to improve education and discipline within the clergy. He visited all of the churches in Rome with the purpose of rooting out abuses. He revised the Vulgate, the Latin Bible, and the breviary and missal.

A less fortunate occurrence was his expanded use of the Inquisition and over thirty heretics were put to death during his reign, including a leading philosopher of the day, the ex-Dominican, Giordano Bruno. Nepotism also played a part in his papacy as he advanced the ecclesiastical careers of his nephews and spent exorbitant sums of money on his family.

During the Jubilee Year of 1600 an estimated three million pilgrims visited the holy places. The Holy Door to St. Peter’s opened, symbolically, on a Church rejuvenated through the work of the Catholic Reformation. Additionally, the massive work he did refurbishing St. John Lateran was a testimony to his papacy, one of the last Catholic Reformation pontiffs.

A particularly thorny issue during his papacy was the ongoing controversy between the Jesuits and the Dominicans regarding the questions of grace and free will. Clement VIII participated in the debate but made no pronouncement on the topic.

In Clement’s later years he was affected with gout to such a degree as to be bedridden, from where he continued to work tirelessly. He died in 1605 leaving a reputation for prudence, generosity, ruthlessness and a capacity for business. His personal austerity was characterized by his compunction for prayer and fasting.

His remains were originally interred in St. Peter’s Basilica but later, Pope Paul V (1605 – 1621) had a mausoleum built for him in the Basilica of St. Mary Major. 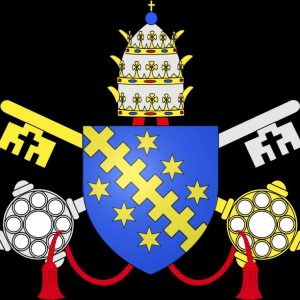 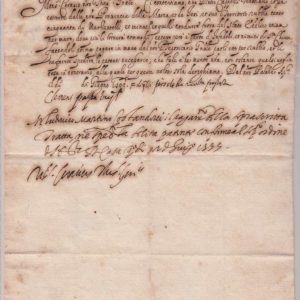 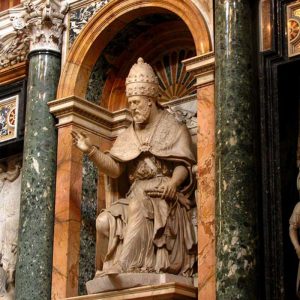