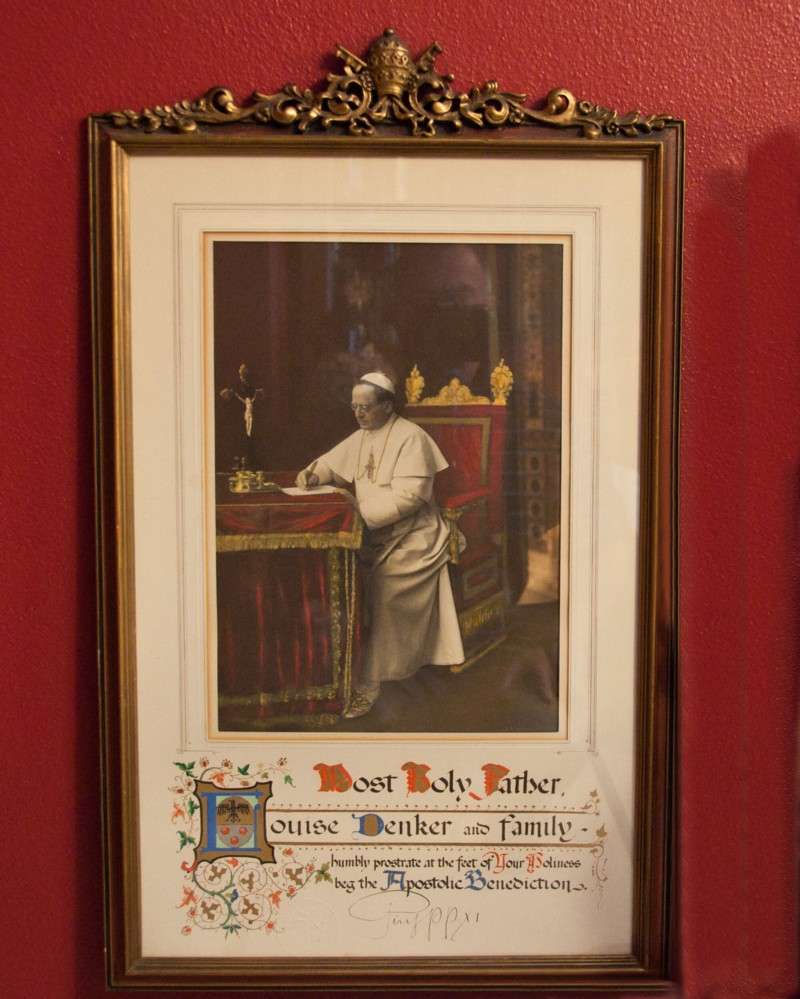 An autographed blessing signed by Pius XI. It is a hand-colored photo of him sitting at his desk. It is in an ornate frame that has cross keys and a tiara as part of the frame itself.

Father Richard Kunst, the Curator of the Papal Artifacts Collection, has written a monthly Apologetics column for his diocesan newspaper, The Northern Cross, since the paper’s inception in 2005. Pope Pius XI is special to Father Kunst for many reasons, not the least of which is the information in the encyclical to which he refers in this commentary.

They are generally written to the entire church, and often a pope’s first encyclical will give a pretty clear indication where and how he wants to lead the church. As of this writing, Pope Francis has written one encyclical. Pope Benedict XVI wrote three, and Pope St. John Paul II wrote 14, but the pope with the most is Leo XIII (1878-1903), who wrote 85!

One encyclical that is particularly pertinent for today was written 89 years ago by Pope Pius XI (1922-1939). His encyclical Quas Primus (Latin for “In the first”) is pertinent for the month of November because with it, Pius established the liturgical feast day known as Christ the King, which almost always falls in November, because it is celebrated the last Sunday of ordinary time, right before Advent begins.

But Quas Primus is significant to much more than just this month. One would think in reading this encyclical that Pope Francis wrote it just yesterday. It is an amazing read!

Read that a couple times and think about it. We cannot say “Merry Christmas” because it is offensive. We can only have “holiday trees” on public property. The 10 Commandment monuments that once were all over the country are being stripped from any government building. Most public schools in the country are no longer starting their school day with the “Pledge of Allegiance” because the words “one nation under God” are included. And heaven forbid that the government allow prayer in any school activity, whether it be sports or graduation ceremonies. And in recent years there has been a growing call to remove “in God we trust” from our coinage.

A second quote worth addressing from Quas Primus should hit a little closer to home, because Pius gives the reasons we got this way: “This state of things may perhaps be attributed to a certain slowness and timidity in good people, who are reluctant to engage in conflict or oppose but a weak resistance; thus the enemies of the Church become bolder in their attacks.”

I would have to say that, second only to pornography, the most confessed sin I have heard in general terms is the times people are too timid to speak up for the church when she is being mocked or attacked by friends, family and co-workers. People are afraid to get into any conflict in defending the church. They do not want to speak out, choosing to keep silent.

This is certainly not only an issue for laypeople. We priests, I think, are even more timid in preaching on tough subjects what the church holds to be true. So often our own parishioners are at odds with the church on the “hot button” issues like homosexual marriage, abortion and artificial contraception, to name a few, so we priests do not want to preach about these issues. We are so often, as Pope Pius XI said, good people, but timid.

I am not sure that even one percent of the Catholic population reads the pope’s encyclicals when they are published, but we certainly should. And I would even encourage you to go back in time to see some of the past encyclicals. Some of them are as pertinent today as they were the day they were written.