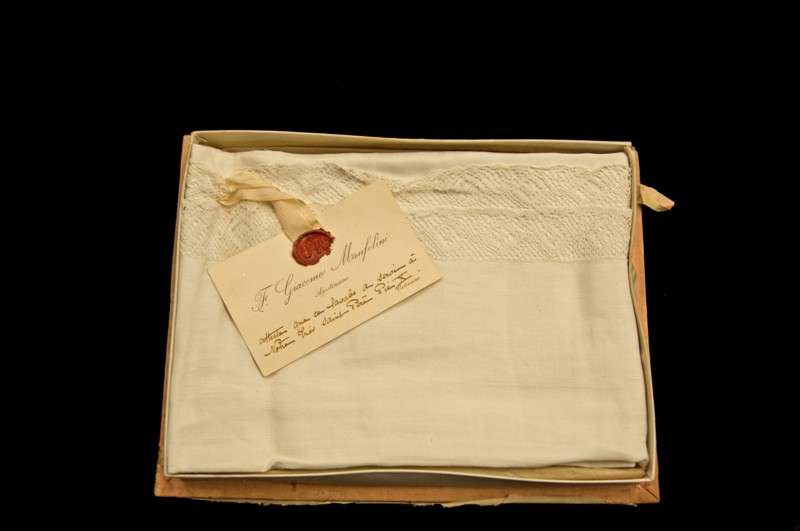 This is what is referred to as a ‘lavabo towel.’ A lavabo towel is something that is used by priests at Mass, right before the Eucharistic prayer. We priests wash our hands in a symbolic way at the Offertory of the Mass. It is symbolic of our representation as mediators between the people and God. We cleanse ourselves of our sins and try to come before God and the Eucharist in a pure way. And so the lavabo towel is something that is customary for us priests to use at the Offertory of the Mass. And this is a lavabo towel that was used by St. Pius X.

It is a very, very nice item. And knowing that St. Pius X is a saint through the redemption of Christ, and that he, himself, just like any priest, was in need of God’s mercy: this in itself is awesome.

Washing of the hands in the midst of the Eucharistic liturgy is so significant. To wash our hands and to ask for God’s mercy as we enter into the Consecration is very humbling and meaningful.

The most important thing that we priests do is to say Mass. The Eucharist is the heart and summit of the Church. And so, here we have something that was used by St. Pius X at the most important part of the Mass, at the most meaningful part of his day. No matter what day he used this, it was the most significant part of his day, and it represents that part of the liturgy when he was preparing himself for the sacred ritual of the Eucharist.

The Eucharist is at the center of our lives. And clearly, it is the most important thing the Pope does as well as we priests.

The card attached to the artifact and the wax seal attest to the authenticity of the item.

During the rite of purification at the offertory of the Mass, when the priest uses the lavabo cloth, he prays, Lord, wash away my iniquity and clease me from my sins as the server pours water over his hands. The towel is then used to dry his hands.