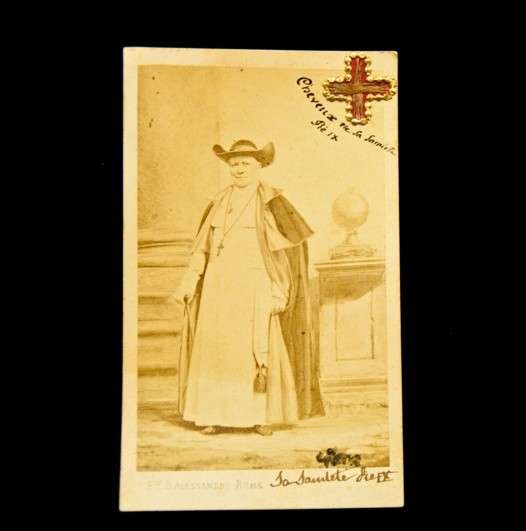 People’s piety manifests itself in some unique ways. This item is a holy card with an image of Pius IX. It is quite old and is a photo taken when he was still alive. Even today the stores around the Vatican always have these little pictures and holy cards of popes.

This one is unique because someone got locks of his hair and then made a little cross with them on the top corner of the card.

Talk about a relic! But at the time it wasn’t a relic, because he was alive, but it showed someone was having this tangible connection with the Holy Father.

Some people might think this is an odd relic, but at the same time, it allowed someone to feel that connection with him.

Both the Catholic Church and the Jewish tradition have relics as such and they are an important part of our identity as Church. This was not a relic, per se, because he was alive at the time. However, it’s a first-class relic now since he has been beatified.

Hair relics are very common first-class relics, and there are five or six of them belonging to different popes in the Collection.

Pope Pius IX remains the longest reigning pope in the history of the Church; his pontificate lasted from 1846-1878 during some of the most turbulent of times, including the dissolution of the Papal States in 1870 and the calling of the 1st Vatican Council. You may read more about him on page 2 of Papal History.