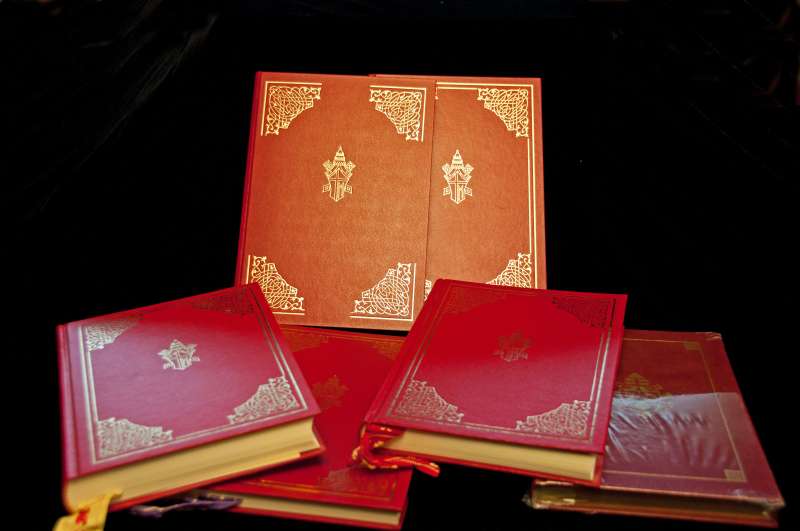 We’ve talked a lot about John Paul II’s travels during his pontificate, something he’ll be known for throughout history. And what I have here is a number of what we call concelebrating books for bishops. Often you’ll see these at big events where there will be many priests and bishops concelebrating, and these are “sacramentaries,” (what we call Roman missals today) of different events—all different places that he went—and the bishops would have these on the stage, so to speak, alongside John Paul, celebrating the Eucharist. They lead back to the Eucharist and also back to some historic events, like his trips to Mexico and St. Louis and the Holy Land.

(Father Morzvitz) The one I’m holding is from World Youth Day in Toronto, which you and I were both at, and we had a few encounters with the Holy Father there, both with the crowds and also, a little more personally.

(Father Kunst) I think that Pope Francis is quickly becoming more unattached to the trappings of the papacy, but I wouldn’t be surprised now, as we are about to go to the canonizations, if the bishops and the cardinals will have something like these sacramentaries as well, and of course, instead of having John Paul’s coat of arms, they’ll have Francis’ coat of arms.

And so again it is humbling, Father Moravitz, for us. I would like to think that for both of us, this is simply an awesome experience to be able to go to this canonization for this incredibly great man who, for me, personally, was truly a model. This guy was a model for me. I am proud to say I am part of the “John Paul II generation of priests.” You know, sometimes that is used negatively, but I don’t see it that way at all. So I am very excited to be a part of the canonization and to share with you the opportunity to go to it.

(Father Moravitz) For me it’s a connection, too, to one thing that was very dear to John Paul II, and that’s Divine Mercy Sunday. It’s, “the call,” and our Holy Father, Pope Francis, is really calling us to a greater acceptance and recognition of God’s mercy and his forgiveness. And the canonization will be on the feast of Divine Mercy this year.
(Father Kunst) He died on the vigil of Divine Mercy, so it’s such a unique event and, of course, (devotion to) Divine Mercy coming from Saint Faustina.

Sacramentaries are books usually written for bishops that contain all the words spoken or sung by them while celebrating Mass.

In this case these sacramentaries were used while concelebrating Mass with Pope John Paul II on various pastoral visits. They were gifts to Father Kunst from the bishop of Duluth, MN, Bishop Dennis Schnurr, who is the present archbishop of Cincinnati, Ohio. He was one of the bishops who concelebrated with the pope on these occasions.

World Youth Day, Denver and the pastoral visit to Jamaica, 1993

The Pastoral Visits to Mexico and to St. Louis, Missouri, 1999

The Pastoral Visit to the Holy Land, 2000 (the most significant of the sacramentaries)

There is also a sacramentary in this collection from Pope Benedict XVI. It is from his pastoral visit to the United States, 2008.